In Iwata Asks I usually only talk to Nintendo staff members, but this time I’m joined by two members of IS (Intelligent Systems, Co. Ltd. 1). Please introduce yourselves, including your work on the WarioWare series. Let’s start with you, Sugioka-san.

1 Intelligent Systems Co., Ltd.: A company that has helped develop Nintendo software (like Fire Emblem and the Paper Mario series, among others) and development tools for various game consoles.

I’m Taku Sugioka from Intelligent Systems. The first game in the WarioWare series I worked on was WarioWare, Inc.: Mega Party Game$! for the GameCube2 I was a programmer then. After that, I worked on WarioWare: Touched!3 and WarioWare: Smooth Moves4 as director at IS and main programmer.

This time, for the Nintendo DSiWare title WarioWare: Snapped!, in addition to planning and directing the trial phase, I performed tests and managed actual production.

2 WarioWare, Inc., Mega Party Game$!: Released for the Nintendo GameCube in September 2004 in Europe. The second game in the series.

3 WarioWare: Touched!: Released for the Nintendo DS in March 2005 in Europe. The fourth game in the series.

4 WarioWare: Smooth Moves: Released for the Wii console in January 2007 in Europe. The fifth game in the series. 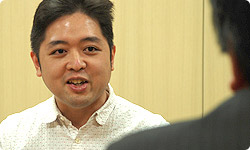 You’ve known Goro Abe of Nintendo for quite a while.

Yes, that’s right. Abe-san, how long has it been?

5 WarioWare, Inc.: Minigame Mania!: The first WarioWare game. Released for the Nintendo Game Boy Advance in May 2003 in Europe.

It really was overdoing it to come out with Mega Party Game$! after just six months, but I was the one who requested it. (laughs) I said, “I want you to remake the original WarioWare, Inc. for the GameCube. And I want it fast.” They said, “How fast?” I said, “As soon as possible!” We haggled over it, and development of Mega Party Game$! began. After a little while, Abe-san told me there was a talented programmer at IS, and it looked like it could be done. That was when I first heard about Sugioka-san.

I myself was worried about whether we could really do it in such a short time.

Did you think I was asking for too much?

Well, if you try, it’ll work out somehow. It turned out to be a good experience, and proved beneficial to my next development project.

We won’t be talking about it today, but Abe-san and Sugioka-san, you two also combined efforts on the DS game Made in Ore6, didn’t you?

6 Made in Ore (Japanese title): DS software scheduled for release in Japan in 2009. Software that allows players to make and play the microgames appearing in the WarioWare series.

Yes. Development of Made in Ore was taking so much of my time that when it came to Snapped! I pretty much left everything to Mori-san, here beside me.

Mori-san, would you please introduce yourself?

I’m Naoko Mori from Intelligent Systems. The first WarioWare game I worked on was Mega Party Game$! I was the art director. Next was Touched!, for which I was the designer… No, before that I worked on Twisted!7

7 WarioWare: Twisted!: Only released for the Game Boy Advance in North America and Japan. The third game in the series. 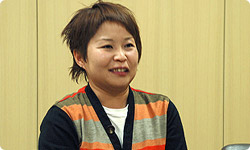 You worked on Twisted!, too?

Yes. Next was Smooth Moves. I was the art director.

Partying, twisting, touching and making smooth moves - you must have been really busy! (laughs)

I was! (laughs) For Snapped!, I was the director at IS.

Abe-san, I don’t think you need to mention what past WarioWare games you’ve worked on, but could you tell us what kicked off development of WarioWare: Snapped!?

It started with a proposal from IS back before we knew about the Nintendo DSi. DS Face Training for Adults8 came with a camera for recognising faces. IS suggested the possibility of using that for something like WarioWare. 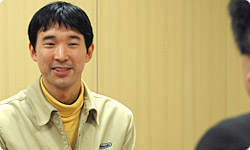 Right. IS was also involved in the development of Face Training, so I borrowed the camera from the Face Training team to make a test model.

The first one we made resulted in a really strange style of play. You held the Nintendo DSi in your left hand, and held your right hand in front of the outer camera.

A feeling of speed is essential to the WarioWare games, so in order to increase processing speed, we made it so the hand captured on camera appeared in silhouette.

How did you play the games?

For example, if there was a ravine and characters couldn’t cross, you could use the silhouette of your finger as a bridge to allow them to cross. But when we started testing it out, we learned the camera was having difficulty detecting the hand. 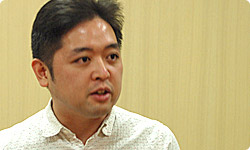 Depending on the illumination, shadows would form, and the camera would detect those by accident.

So we laid a black mat underneath so shadows wouldn’t form.

So we made a finger sleeve for the players’ index finger. Anyone, regardless of variations in skin tone, would be able to play.

For a while we were even using gloves.

We were seriously considering selling the game together with the finger sleeve and black mat.

I doubt anyone would buy something like that. (laughs)

The whole idea of using one hand to hold the Nintendo DSi and moving around your other hand to play was bound to fail. So then we tried out a bunch of stuff, like capturing your feet on camera...

Yes, your own feet. (laughs) That way you could hold the Nintendo DSi with both hands. But we weren’t sure it would make for good gameplay...

And it would look weird! (laughs)

We tried other things – like secretly capturing the face of someone facing you on camera and then sticking that person’s head into nose holes during the game—but nothing seemed to feel quite right.

So we gave up on the outer camera and tried using the inner camera to capture the player’s own face.

We created a test model that could be played by setting the Nintendo DSi down, which was alright in its own way, but it didn’t quite have the feeling of speed that previous WarioWare games did. The project was getting bogged down.

Anyway, it had been decided to set the DSi down, so at the very end, I asked them to present another proposal. And the catchphrase for that was WarioWare: Don’t Touch?! 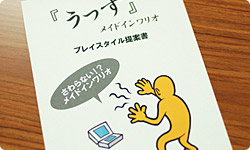 In addition to the proposed style of play, the last page was a “bonus” section.

There were weird photos... Uh, it looks like we’ll have to talk about you know what.

Something that shows up at the end of the game.