2. A Digital Camera You Can Play With

Moving on, I’d like to ask some more about the Nintendo DSi’s most obvious new characteristic - the cameras. Imaizumi-san, would you please introduce yourself?

"Somewhere along the way"? (laughs) Could you tell me a little about that? You can even say I tricked you into it, if you want.

Okay. Originally, I was a member of the Console Features Review Team,which has been mentioned here before. I gathered everyone’s opinions, sorted them out, and passed them along. During those discussions, one thing everyone was certain about from the start was including photo software. 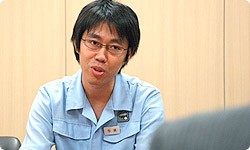 Because the console has cameras.

Right. When we first thought about software for the cameras, there were two possible directions we could take. One was storing up pictures for yourself as a sort of personal photo diary or album. The other was using the pictures you had taken as material for play. The console would then be a kind of digital camera that you could play with.

Which direction did you think was best?

I thought that if I were making it myself, I would go the route of a digital camera you can play with. Of course, in my position at the time, I viewed it as someone else’s problem to work out the details.

So you wrote the specifications, all the while thinking, “If I were making it…”, based on the idea of a digital camera you can play with?

That proved to be quite prophetic! (laughs)

Kuroume-san, do you remember when Imaizumi-san came on as director?

Yes. He had been director of the DS Shigurenden (released only in Japan) and after that he was in charge of the Wii Internet Channel. Given how good he is at coordinating things, he ended up being the one to soak up everyone’s opinions regarding the cameras and put them together into concrete specifications. It just seemed right to keep him on as director. 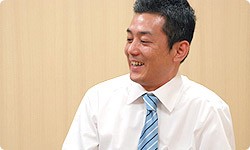 If you’ve already got someone making all kinds of decisions, using that person as director is only natural, I suppose. So before you knew it the team had come together, and, Imaizumi-san, you found yourself the director.

Much has already been announced, but could you briefly explain the features involved in a “digital camera you can play with”?

Sure. In the end, we were able to include a total of

Moving on, I’d like to ask some more about the Nintendo DSi’s most obvious new characteristic - the cameras. Imaizumi-san, would you please introduce yourself?
11 types of play . As soon as you take a picture, you can start playing with the Distortion Lens and the Graffiti Lens. With the Distortion Lens you can use the stylus to bend subjects out of shape, and with the Graffiti Lens you can write on them or stamp images onto them. The Frame Lens has about ten kinds of regular frames and fun ones using images such as Mario’s hat and moustache. You can crop the pictures you take and make your own unique frames.

There were lots of women on the team this time, so a lot of the stamps, frames and other frills are cute. There are also modes for changing the colours, for example, by colouring only certain parts of black-and-white photos or changing red to blue.

And there’s one with face recognition.

Right. It automatically recognises faces, leading to more possibilities for play. We put in all kinds of stuff. The Merge Lens melds two faces together and the Resemblance Lens determines how similar two faces are. With the Emoter Lens you can change a person’s facial expression, and with the Mischief Lens you can add various doodles to someone’s face. There’s a lot users will be able to do instinctively and also a lot that can be done with some effort. It’s got a lot of range, so the camera alone makes for almost limitless play. 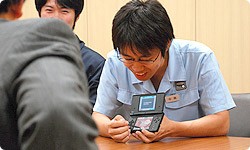 I see. Shall we have Miyamoto-san say something at this point? You had some very specific ideas about play involving the cameras, didn’t you?

Yes. The main things I wanted to include were art tools and a graphic editor. For a handheld console, I think it’s good if there are elements encouraging users to pick it up and fiddle around with it when they’ve got some time on their hands.

I’ve always said that, for a while there, text messaging on a cell phone was beating video games as the easiest way to pass time. During that period, it was more enticing for young people to kill time on the train by texting rather than by playing video games.

That’s why, as an unusual example, if cell phone companies had given users text composed of so many dozens of letters and assembled a ranking of who could thumb it in the fastest, that kind of text-messaging speed contest might have been more fun for people than a fighting game.

That’s what I used to say, but now we’ve got the Nintendo DSi. I want everyone to walk around with their DSi on them. It would be great, I thought, if everyone killed time on the train ,or wherever, editing the photos they’ve taken on their DSi, casually combining pictures, adding text, and sending them to friends. 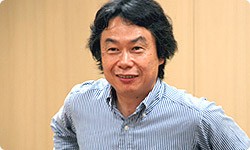 I remember now! (laughs) When they heard your idea, they thought we would have to give the DSi an all-purpose photo editor like ones found in personal computers, and everyone was abuzz wondering whether we could really make something like that in just one year!

For some reason when I said that, everyone thought I was envisioning an ultrahigh-performance digital art application.

Well, you were so excited, it sounded that way to me too! (laughs)

I was just trying to say that I wanted something that allows you to cut up, edit and merge your photos. Of course, the more possibilities the better, but that was the minimum that I wanted. With that as a basis, I was willing to compromise with the designers. (laughs)

When it came to deciding whether we should include fonts, I wanted simple fonts put in, but the developers thought users would be fine writing by hand. As we worked through the ideas, it gradually came together, but if we were going to have cameras and an editor I didn’t think overlaying elements onto photos was a feature we could do without. I wouldn’t budge on that.

You kept saying that since the DSi has a touchpen, screen of decent size, and even cameras, we had to put them to good use by adding a fairly substantial photo editor, and I was trying to figure out how to dissuade you. As I listened to you, however, I got the idea that all you really wanted to do was crop photos and combine them with others.

That being the case, everyone thought it might be possible and steered the unit toward its current form. Supposing we could actually

Moving on, I’d like to ask some more about the Nintendo DSi’s most obvious new characteristic - the cameras. Imaizumi-san, would you please introduce yourself?
cut up photos and combine them with other photos as Miyamoto-san wanted, that would mean users could easily create composite pictures, with some fancy results. That’s what led to everyone in the department playing with photos ( 1 , 2 , 3 , 4 , 5 , 6 , 7 ).

Well, we needed to work out the specs, so we took lots of photos and played around with them. There are some amazing ones! (laughs)

I guess so. As someone who can’t draw very well, I feel we’ve made a delightful tool for playing with. 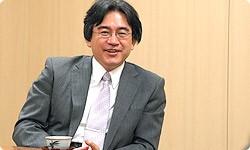 I should also mention that the pictures you’ve taken or altered can be exchanged between one DSi and another via wireless connection. And, of course, you can carry them around in your SD memory card, or display them on your TV using the Wii’s Photo Channel.

This can be fun to play with alone, but it’s also a strong tool for interaction.

Ha ha ha! Don’t take this the wrong way, but it was a little weird the way you were having fun as you worked.

I’m sure it was. There were a lot of difficult challenges, but I couldn’t help laughing sometimes. (laughs)

I could hear everyone laughing out loud over where they were working on the camera software. They were taking photos of each other, so they would stand up, stick their heads up over the partitions, and make a racket. I got mad a few times.

No, I thought it looked fun.

So anyway, that’s how the features for playing with the cameras came together. At last, everyone had realised what the Nintendo DSi was going to be-its design, functions, and features. But then Miyamoto-san said something was missing.