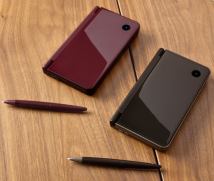 3. Three Months of Struggle in China

Before discussing what a struggle it was to make the top panel, let's hear more from Amano-san. At what stage does the design get passed across to the people working on the mechanism side of things?

The members of the mechanism team are involved from a pretty early stage. We actually started the task of slotting the components into the square box before the design had been finalised.

Out of interest, what sorts of problems are presented by enlarging the Nintendo DSi?

This time round, there was a lot of emphasis placed on making the console as fast as possible, so we started with a policy of not altering the basic structure. But we were concerned that by increasing the size of the console, it would adversely affect its reliability.

By making it larger, it becomes heavier which in turn makes it more likely to be damaged if it’s dropped.

That’s right. We spoke a little while ago about the large version of the DS Lite, but this time around the console has become larger still and has actually become thinner. Also, to keep the weight down, we initially started with minimal internal reinforcement so that we were extremely concerned as to whether or not the console would prove sufficiently robust.

Every time Nintendo makes a new portable game console, it is standard practice to carry out very rigorous tests wherein the console is dropped. It wouldn’t have done for us to say: “This time round, the Nintendo DSi XL is really big so we want to skip those tests."

Indeed it wouldn’t have done to say that! (laughs) So at first, we were absolutely terrified that the first time the console was dropped, it would be smashed to bits.

What were the results when you actually carried out those tests?

Given that we put together the console at an early stage this time, the impression we got was that it didn’t break up as much as we’d thought it would.

So that part went quite smoothly.

Yes, that part did! (laughs) The first samples were ready in around June 2009 and when we realised that it wasn't breaking up in the tests as much as we'd feared, we thought that we could carry on and all would be plain sailing… 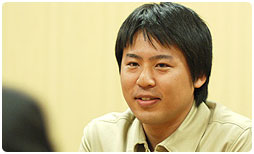 That’s what you thought at the time... (laughs)

Yes, we thought that at the time! (laughs)

It had all gone smoothly right up to the initial samples being prepared, but then all of a sudden something occurred which threw a spanner in the works. I think that it’s best at this point to ask Yoneyama-san to tell us about his outstanding efforts in China.

Certainly. Well, as Amano-san mentioned, the initial samples were completed by around June but we weren’t yet at the stage where those could be directly made into the finished product. While we hand-make prototypes in Japan, mass production occurs in China.

In the past, there was a time when we would start mass-production in Japan before moving it across to China.

In recent times, the process takes place in China right from the stage prior to mass production when we make trial development versions, before moving on to the second and third stage of production. This time round, the aspect which entailed the most trial and error was the key element of the design - that is to say, the top panel. From the start, I knew it would be a tough one, but when we actually tried to make it, all sorts of flaws made themselves apparent and we were unable to rectify these, no matter how much we tried. The bitter struggle to overcome these problems began from around the middle of July and I was only able to make it into the Nintendo headquarters on one day during the whole of August! (laughs)

Well, I wasn’t able to come into office even once during the whole of August and September! (laughs) I only came back to Japan for the Obon summer vacation. Thanks to the top panel, I was with Yoneyama-san and Fujino-san in China the whole time.

Could you tell me what kind of problems were caused by the top panel?

While the top panel might look as if it’s a piece of transparent plastic that's just been stuck on, it's actually printed four times on the reverse, one layer on top of the other. We had problems with the thinner component in the ink being absorbed by the plastic.

The plastic vendor knew all about plastic, while the vendor for the paints knew all about that side of things, so we consulted with each of them individually a number of times and they cooperated with us in inspecting the problem. But because there was no one who’d ever put this combination together, there was no one who could offer us a solution.

So it felt like you were trying to solve a puzzle looking at issues such as just what type of thinner would work best with what kind of paint. You’d vary all sorts of parameters, see what the results were and then keep doing tests repeatedly.

No matter how challenging puzzles in a game may be, they’ve been designed so that you will be able to solve them at some point. But this was a puzzle where we didn't know if there was a solution or not, so to be honest, I was worried. 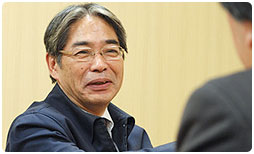 It was a puzzle where there were no guarantees that there was a solution, but you had no option other than to try.

That's right. And while we were of course able to make guesses, it was incredibly hard to get the correct solution. Furthermore, even if the product is fine just after it's manufactured, we have to check how it will withstand wear and tear over the course of several years.

So even if it’s fine at the time, it's no good if it starts to malfunction some time after the product’s been purchased. I told you that even though it was time-consuming, I wanted us to run thorough checks, recognising the importance of looking at how the product would be affected over the course of time.

So just when you’d cleared one hurdle, another one presented itself. It felt like you went through this process four or five times. How many top panels did you make for the development tests?

It was so many that I can’t remember exactly. I think we made between ten and twenty thousand.

Between ten and twenty thousand! Didn't you feel while you were working on this that you had lost sight of the exit?

The trouble started in early July and by around August, I was wondering: "Are we really going to be able to come up with a solution?"

But with the cooperation and hard work of the young engineers at our Uji Plant, I think that we were able to successfully come up with a top panel that reflected what we’d set out to achieve. So at the end, after overcoming so many problems, we got the sense that we might just have pulled it off.

So it took a whole three months to solve all of the problems.

The fact that we were able to overcome those difficulties was not due solely to our efforts - we owe it also to the cooperation of the engineers in the Uji Plant, which we're really grateful for. So when mass-production began and the first console was manufactured, although we were still too busy to do so at that time, we sent an email to all the people involved saying: "We've managed to successfully manufacture the first console today!" And we got a response right away from Kuwahara-san congratulating us.

So while these three were going through this bitter struggle in China, what were you doing, Kuwahara-san?

I was back in Japan merely overseeing things. It wouldn’t have done for me to keep pressuring the team in China so I did everything I could to attend to their needs.

But whenever we make hand-held consoles, some kind of trouble always rears its head, doesn’t it? But this time, as there wasn’t any trouble...

Well, until part of the way through... (laughs)

Right, at least until part way through! (laughs) So when the trouble did rear its head, I felt that it was not different from other products we had made.

Well, it's not much fun to have to face these problems, is it? (laughs)

But if we hadn’t had the top panel to deal with, I’m sure it would have all gone smoothly. So people would get angry at me and demand to know what had made me come up with this design.