Suzuki-san, when you were creating Face Raiders, what were you particular about?

You worked on Face Raiders with HAL Laboratory as well, didn't you?

That's right. Face Raiders is all about laughter, so people would always ask me, "Isn't the WarioWare, Inc.: Mega Microgame$ team making that one?" But it was actually the team that made those rather serious General Knowledge games. (laughs)

HAL Laboratory helped us out a lot. Half of the staff for AR Games was from HAL Laboratory, and they made all sorts of other things with us as well.

So, from my point of view, since we'd made General Knowledge games last time, I thought we'd rather work on a game that wasn't about training.

When you have worked on software with similar concepts several times in a row, you want to try something different.

Yes. I wanted to make a game that would also interest the people who'd played the training software. That feeling was very strong as I began developing Face Raiders.

I think it's interesting just to have your face and the faces of people you know show up, the way they do in this software. However, you went into it feeling that you didn't want things to end there.

That's right. Of course we could just have used the face gags to make people laugh, but from the very beginning, we'd planned to add some sort of game-like punchline to the project, and we produced it with that in mind. We didn't want players to finish by thinking, "Hm. Interesting." We wanted them to think, "Hey, wow!" and want to try playing it again. We were very picky about that.

The more you play, the more play elements you discover in this game. That was the impression I got. 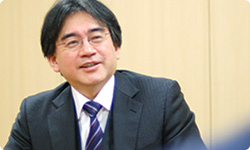 When we performed the first experiments on things you could do with faces, there were lots of really interesting things. You could change faces with montages, and there were all sorts of amazing ideas, so we decided to make it so you could apply all these things to your enemy.

Frankly, both Face Raiders and AR Games have so much substance that it seems a shame to leave them as extras for the Nintendo 3DS system.

Yes, we were able to pack in many elements in the end, we believe. (laughs) Since we put Face in the title, we created it with the intention of cramming every face-based trick we had in there, but the fact that the Merge effect was such a big hit among the developers was frustrating for us.

You feel as if you've lost to the Merge effect?

Yes. We wanted to win one way or the other. So, right at the end of the development we added an element that, when I am actually playing it, if I point the outer cameras at you, Iwata-san, right in front of me, my enemy's face will change into yours.

It can recognise the real-life image shown on the screen in real time, so you put that feature to good use.

That's right. The Merge effect frustrated us so much that we struggled to the very, very end.

But even in Face Raiders, photos you've shot with the Merge effect show up as enemies, don't they?

Right, we were so frustrated, we made it so people could use photos shot with the Merge effect in Face Raiders. (laughs) So, for example, a photo made by merging Mizuki-san and Kawamoto-san's faces could abruptly show up in the game.

Well, even if you've merged his face with Kawamoto-san's, it will just look like Mizuki-san to everyone else. (laughs)

Even so, it's pretty startling to have a photo you'd taken elsewhere show up abruptly, or have the faces in the room suddenly be recognised.

You're right. I wanted players to think, "Huh? Where did that face come from?" If it were always the first face they'd photographed, it wouldn't be startling. That trick was possible only because we had Nintendo 3DS Camera. It's the same in AR Games; you can take plenty of screen captures and leave a detailed record of what you've played. 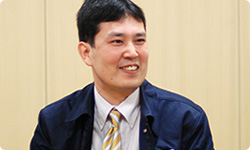 The Nintendo 3DS Camera team undertook all the specifications for those screen captures. In that sense, too, it seems to me that the collaboration on this project as a whole went really well.

The themes seem to be all over the map at first glance, but on the other hand, you can feel connections between various parts of all of them. Not only that, even though you were all affiliated with separate teams, it seems as though you all pulled together and created your projects around a single idea.

That's probably thanks to the fact that we all worked together on the same floor.

There were a lot of times where the team close to you would be putting in a certain type of specification, and then your team would think, "Now, what should we do?"

I see… So you were both comrades and rivals.

For example, at first, I thought it might be better to have the function of photographing Mii characters, which we put in AR Games, in Nintendo 3DS Camera instead, so I discussed it with Akifusa-san's team. As it turned out, we were short on time, so we ultimately put it in AR Games, but discussions of that sort happened all the time.

What I remember is that, in the Graffiti tool for Nintendo 3DS Camera, there's the 3D Tools function. That was originally one of HAL Laboratory's experiments. When we saw it, we said, "It would be great to put this in Nintendo 3DS Camera, wouldn't it?" so we took it to Akifusa-san's group, and ultimately had INTELLIGENT SYSTEMS make it. The way we interacted on this project was fairly dynamic like that.

I see. Kuroume-san, you've kept an eye on pre-installed features for many years. How did it strike you, when they managed to do things like this?

Well, all I've really been doing today is listening, but when I've seen everyone talking and laughing about this, I think, "Did they really get along this well"? (laughs)

Well, during development, we really are both comrades and rivals, you know. (laughs)

But we'd never have been able to make something this big if the physical distance involved was too great, so as Suzuki-san said a while ago, we had all the people creating the pre-installed software in the same room on the same floor. 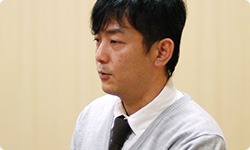 It wasn't everyone, but you had as many people as possible in the same room.

That's right. HAL Laboratory developed this alongside us for a year, and it was the same way with them; afterwards, I felt that it had been really good for us to be able to work on development in a close environment like that. In addition, although unfortunately they couldn't join us here today, (Satoshi) Furukawa-san and (Takako) Masaki-san from the Software Development & Design Department helped by coordinating the separate development teams as the “cross-sectional department.”

Like you, Kuroume-san, Furukawa-san has been involved in UI (User Interface) for a long time, so he's well aware of how important unity is.

I think you're right. It's very important on a project like this, where you've got so much pre-installed software with so many abundant variations, and you have to pull it together into one product and ensure that players won't get confused.

The people from the “cross-sectional department” took all these disparate things and bound them together neatly.

Yes. I think that's why, beginning with the HOME Menu, and including the pre-installed software, we managed to create a product that really feels like Nintendo.