5. Better on the Nintendo 3DS System

During E3 2004, the title that would later serve as the backbone of Steel Diver was showcased as a demo title for the Nintendo DS system. When we showed it, there was a bit of a following for it. Many people said it was fun. In that sense, I believe it had a lot of potential even at that time.

Yes. That was how it all began.

But that submarine game wasn’t made just to show at E3 2004. Since the earliest days of your career you had wanted to make a game like that.

Yes, I suppose so.

Was it an idea you had been building on for a long time?

Well, I wouldn’t say that. (laughs) It’s just something that was stuck in the back of my mind.

I felt so mortified when that was released.

I wanted to make some kind of simulator where you would control something huge, but they beat me to it.

You had such a developed idea in your head, so why didn’t you make something of it sooner?

Well, there were many obstacles to overcome first. For example, if I wanted to control a submarine there was no interface for it. If I would control the submarine in an action game, I could make it. But if it were to be controlled like a flight-simulation game, you’d have lots of dials to look at and adjust while trying to move it. 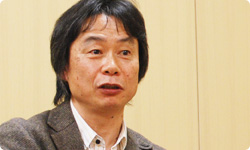 If you just used the +Control Pad and the A and B Buttons, it would lack the sense of immersion.

Yes. Also, this might be a minute detail, but when you move something large, you need a “throttle” in the cockpit. You can’t substitute that with just buttons. When you use the throttle and move it up or down to a certain position...

It stays in the spot to which you moved it.

Right. But with controller buttons you turn it up when you're holding down the button, and it’ll shut off when you let go of the button. That seems to be what is commonly used.

I want throttles so it’ll stay where you left it. Throttles have to be something that, if you forget to pull back, you’ll go, “Argh! I forgot about the throttle!”

But for the Nintendo DS system, we had a Touch Screen allowing us to put lots of dials on it.

And the throttle, too.

Yes, that too. By putting it on the Touch Screen, you can move it up and down with the stylus. By putting it next to the dials and switches, in a way, it’ll feel somewhat like an audio mixer.

So, the submarine game materialised with the release of the Nintendo DS system.

Yes. And the Touch Screen can be used as an interface to control robots and other things, in addition to submarines.

But why didn’t it see the light of day as a Nintendo DS game? By showcasing it at E3, you had favourable responses to it, didn’t you?

Hmm... I wonder why. I think that one reason was because my hands were already full with other titles.

But if you said that, you’d always be too busy for it. (laughs) Let me put it another way. Why did you choose to release it for the Nintendo 3DS system? 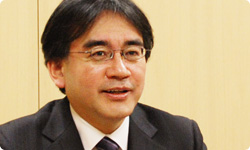 The project was on hold, and about two years after the Nintendo DS system was released, one of the teams finally had time to work on it. That’s when we resumed its development as a Nintendo DS title. But right as we were making it, the features of the Nintendo 3DS system started to be finalised. So while we were developing we thought, “This would work so much better on the Nintendo 3DS system!” It’s basically a side-scrolling submarine game where you would move through a three-dimensional body of water. We thought it would look so much prettier if there was depth to it and the wider screen.

It always has been a very plain game. (laughs) But it was a matter of how we could present this plain game in the best possible way. We came to the conclusion that it would look great in 3D.

We wanted to test out how it would look as a Nintendo 3DS title, so we replaced only the visuals of the game under development with the ones for the Nintendo 3DS system.

I remember that. It seemed to suddenly look much more real.

Yes. The ditches on the surface and the depth perception made the quality and charm almost worlds apart from the previous version. So, we decided to put some serious effort into finishing it up as a Nintendo 3DS title.