2. Expanding the World of Mii Characters

There are two separate features revolving around Mii characters on the Nintendo 3DS system. I believe that everyone will enjoy both of them a lot.

That would be Mii MakerandStreetPass Mii Plaza, right?

To return to something we discussed in a previous interview, Mii characters would never have come into being if Tomodachi Collection hadn’t been made.

You had tried to accomplish that feature ever since the time of the Super Famicom and Nintendo 64 systems. Because you thought caricatures were fun, it was like a dream of yours to “put your virtual self into the game.”

Yes. No matter how many setbacks I experienced, I never gave up. (laughs) 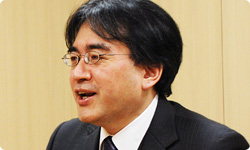 Yes. (laughs) And one day, when I saw the Tomodachi Collection in development, I showed it to you and asked if this was what you had wanted to do all along. That’s how Mii characters started.

Right. It all started there. We went on to add Mii characters into the Wii console. Then we made Tomodachi Collection for the Nintendo DS system, and now it’s built in on the Nintendo 3DS system.

It’s such a strange turn of fate. No, it would be more accurate to say that your unrelenting tenacity was what gave rise to it.

Yes. In relation to Mii characters this time around, we maintained two main themes. One is the compatibility with the StreetPass function. In other words, just passing by people who also have a Nintendo 3DS system will allow them to expand the world of Mii characters.

In the past, the Tag Mode feature required people to have the same game, whether it was nintendogs or Dragon Quest IX: Sentinels of the Starry Skies, inserted in the system while passing by each other. But for the Nintendo 3DS system, as long as you’re holding onto the system itself, StreetPass communication will be activated. Granted, this doesn’t mean the player’s Mii characters will roam without their knowledge. But only if you have activated the StreetPass Mii Plaza at least once and when you turn on the StreetPass function, your Mii character will continually roam and appear on other people’s Nintendo 3DS systems.

Yes. Simply put, I want to spread Mii characters all around the world.

Exchanging Mii data with people close to you is a given. Whether you use StreetPass or do it through a wireless network, I want to implement Mii characters in all sorts of ways. Ultimately, I want Mii characters to be the world standard for avatars. 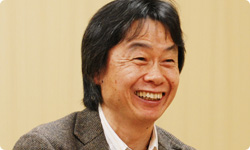 Yes, an ambition. (laughs) I hope that in the future, when you have to go to the city council for some administrative formality, they’ll ask you to submit your Mii character too. (laughs)

(laughs) What an ambition that is!

If it becomes a worldwide format, it’ll be fun. Purely and simply, I just want everyone to use it in a variety of ways.

Well, that ambition about the city council thing might be a bit extreme, but I do want Mii characters to be more widely used. And for when that time comes, doing something about the editing application for Mii characters is the second theme.

In other words, you want to "power-up" the tools used for creating Mii characters.

Yes. Mii characters originally had some restrictions, but there was a very simple editing application that could be used to create a virtual self for someone. That was fun in itself. But then I started to see what we should add in terms of functions, such as the creation of facial features relevant for people overseas.

Yes. It seemed we had a lot of variations for Japanese people, or Asians rather, making it easy to make avatars for those people.

Yes. All in all, it’s very easy to understand when it comes to us. (laughs) But I wouldn’t be able to fulfil my ambitions if it was left as it was.

Because you’re aiming for the world. (laughs)

Right. And another thing is that it’s hard to make unique looking men and women with distinctive characteristics.

Oh. You mean like everyone starts looking the same?

Yes. We’ve improved on that a little bit. Also, I wanted to be able to make Mii characters look closer to the person without just continuing to add lots of the different components you can use,. We made it so you can adjust the length and width of the eyes, mouth and other facial features. With this feature, you can have more variations in your Mii character, even with just a few parts.

That’s why you’ll be able to create a Mii character that looks a lot more like you than was previously possible. You can make a lot of fine adjustments now, but I’m sure there are some people who don’t want to do that.

I completely understand. When you get more things to do, everything seems more complicated.

The best thing about Mii characters is that they are relatively easy to make. That was a rational decision we made in deciding its direction. So, during the development, while we were thinking about providing the ability to fine-tune the faces, we also researched another way we could easily create a Mii character. One idea came up about taking a photo of someone’s face, then having it analysed so a Mii character could automatically be created from it. I was very sceptical of the idea at first and said, “Yeah, but that’s not going to work as planned.”

But we didn’t need a mechanical image analysis that was exact to the smallest detail. We thought it might work as long as we could automatically caricature the portrait just enough for each player. We kept talking about that and kept researching, and we started to get something that was very viable.

When taking a photo of someone, you’ll automatically get several variations of his or her Mii. And you can select from among the list and even fine-tune from there. 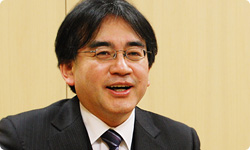 Yes. That’s why, if you really wanted to make it look like yourself, you would still have the option to adjust it. But if you want to make it quickly, you can leave it to the image-analysis feature. So, just taking your Nintendo 3DS system everywhere with you and creating Mii characters of lots of other people can potentially be lots of fun. And considering how it’s much more fun for everyone to have access to it, we had to pre-load it into the system instead of having the consumer buy a separate cartridge.

Yes. There is intrinsic value in something when everyone has it.

Right. And to make it a world standard, we had to include it on all Nintendo 3DS systems from the beginning.

So, it’s still based on the fact that you wanted to make it a world standard. (laughs)

Yes. I want to. I really do! (laughs) We included PictoChat on the Nintendo DS system in the past, but this has a slightly different meaning to it. We wanted to include PictoChat because it is something you can’t play alone but that could be convenient because every Nintendo DS owner has it.

But for Mii characters, I want to expand and branch out even further. That’s the idea behind including it on the Nintendo 3DS system. StreetPass is something everyone can do under the same conditions.

So, everyone who bought it can enjoy it equally.

Yes. And this might be getting really specific, but you can also output a Mii character as a JPG image. We also made it so you can convert Mii characters into QR Code patterns (a type of barcode). So you’re now able to do things like placing your Mii on New Year’s greeting cards, or read the QR Code patterns of other peoples’ Mii characters from magazines and business cards on your Nintendo 3DS. After Mii characters debuted on the Wii system, all the suggestions about how it should be could then be implemented.