6. See It for Yourself

Umezu-san, at first you were sitting around thinking about it all alone. What do you think about it now that Nintendo 3DS is a real product?

To be honest, when I first saw the nicely painted prototype, I thought, “Oh, that turned out well!” I think the exterior looks better than any previous systems in the Nintendo DS series. Well, I guess that topic’s - 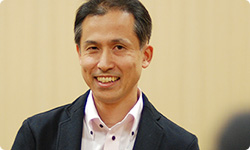 I’ll talk about that next time with the developers who were in charge of the exterior design.

Yes. They paid a lot of attention to detail, so I suppose you can ask them all about that next time. (laughs)

As the person in charge of system design, something I’d like everyone to look at is the graphics. I think those who thought the Nintendo DS system’s graphics were lacking something will be more satisfied this time. Of course, seeing them in 3D holds more surprise, but the basic performance of the LCD has improved, so even in 2D it’s satisfying.

What do you think, Sugino-san?

I think it turned out to be a product in which, as is often the case with Nintendo, the hardware and software are perfectly matched. It’s got a lot you can’t find elsewhere, like - as mentioned earlier - the ability to combine faces and easily take 3D photos. 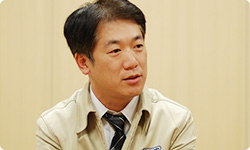 These functions of Nintendo 3DS you mentioned now, when we look at each one of them, aren’t exactly anything new, but all together like this, everyone from children to guys in their 20s to women my age can enjoy it. I think we are now in a position to offer pretty good proposals with Nintendo 3DS and can anticipate some solid response.

Yes. It has good balance. And from the standpoint of design, it has more switches...

And not just switches, but lights, too.

And it has three cameras - two outside and one inside. But seeing the final product, I don’t think we put in a single unnecessary thing.

That goes for the internal components as well. We packed in so much that there isn’t any extra space at all.

It was quite a learning experience for me to work with Konno-san on this project. I realised our viewpoints are different.

Like how he uses demos to gain acceptance of his ideas?

Not exactly what I had in mind, but... (laughs)

When it comes to achieving a particular function, we technicians tend to think smaller is better and rush off down technical paths, but Konno-san and his team place importance on response and how it feels.

Hardware developers think logically, and you can’t make anything if you don’t. Some things, however, may look better to logic but lose out to something that simply feels better.

The discussion regarding the 3D depth slider was like that. At first, the idea was that software adjustment would be enough, and Sugino-san thought a +/- switch would be enough, but we thought it definitely had to be an analogue slide. 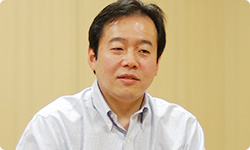 For a guy like me who’s specialised in hardware, it was a breath of fresh air to encounter that kind of thinking.

Sorry for always saying whatever pops into my head! (laughs)

Something I keenly felt when we developed the Wii console is how Nintendo’s hardware developers and software developers are in the same building and go back and forth repeatedly when they make something, so that when one side passes something to the other, the other side responds. As Sugino-san said earlier, I think we made Nintendo 3DS in our own distinctive way. What’s more, Nintendo 3DS may be the first chance ever to suddenly deliver into millions of people’s hands a glasses-free 3D device. I think people who were sceptical at first will, upon seeing it, say, “Hey, this is good!” After all, even Sugino-san, who suffered from 3D trauma, shifted to a more positive stance. (laughs)

The impression that Nintendo 3DS makes when you see it through conventional media like magazines, newspapers, television and the Internet, is completely different than when you see the real thing, so you have to see the real thing. That’s why for three days from 2011 January 8 to January 10, we held Nintendo World 2011, the first public demonstration of Nintendo 3DS, at Makuhari Messe. Everyone from people who were always excited about it to people who were doubtful showed up, and I saw firsthand all over again how you can only grasp the Nintendo 3DS system’s value by seeing the real thing. Lots of people saw it and said the 3D looked better and more natural than they had expected, so I was glad we had held the event. I could also see that the players enjoyed the same things that we developers did with regard to the AR and gyro sensor. Many more people watched over the Internet than could actually come to the hall, so as we approach the launch, we’re going to hold more such hands-on events. I hope anyone interested will come see it with their own eyes. 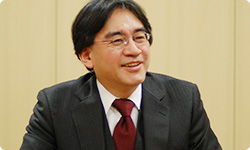 I saw the HOME Menu screen for the first time the other day. And it was 3D! That alone is cool! The menu icons are just lined up, but it made me want to check everything out! I didn’t think we’d take the 3D so far. I want to show people just the menu!

Not just the menu, but there’s a lot in the system that I want to show people.

Yes. There’s a variety of pre-installed software. So if you buy a Nintendo 3DS...

Even if you don’t buy separate games, you can get plenty of enjoyment out of it. That would be a problem for us, but... (laughs)

Yes. I’m worried people won’t buy any games! (laughs) That’s how much there is to enjoy in the system, so I hope everyone enjoys it.

Today we’ve covered how the hardware came together, and now we’re in the homestretch for the games.

Yes, the final stages. We’re working hard to create something as fun as the hardware, so I hope people will enjoy it.

I’m looking forward to it! (laughs) Thanks for your time today.

It was our pleasure!