How long did it take before you began to feel the solid expectation for the final outcome?

This time might have been an unusual example, but since we were making two games at once, we divided it up, taking care of the final action bits in Resident Evil: The Mercenaries 3D and making graphics and other aspects of presentation in Resident Evil: Revelations.

Was making two games part of the plan from the very beginning?

The plan for Resident Evil: Revelations was moving along first, but we were putting a lot of work into the scenario and other aspects of the game, so it was going to take a long time to complete. However, we wanted to release something soon after the Nintendo 3DS system hit the market, so we started making and testing Resident Evil: The Mercenaries 3D - the game system of which was already pretty much in place. I thought Resident Evil: The Mercenaries 3D stood above Resident Evil: Revelations when it came to impact rather than fear, and there was a desire to see it become its own product, so it worked out perfectly.

You chose the genre that would be easier to pour a concentrated amount of content into in a shorter period of time. In a way, we are cooperating to spread the same platform - the Nintendo 3DS system - but at the same time we’re competitors. Timing is important in how you approach the players when taking a game to a new platform.

I saw all kinds of titles at Nintendo Conference 201012 and the Nintendo 3DS exhibition at Nintendo World 2011.13 They were all rival products, but looking on from the side, I thought, “We never thought of that, so I better pay attention.” (laughs) 12Nintendo Conference 2010: An exhibition for professionals in the gaming industry held at Makuhari Messe in Japan on September 29, 2010. 13Nintendo World 2011: An event held at Makuhari Messe in Japan for three days starting January 8, 2011.

Without such stimulation, our world would only progress at a fraction of the pace it does now. What pushes our world along is looking at each other’s work and thinking, “They beat us!” and “That’s cool!” and “How would we use that?”

That’s right. Making a game is thrilling and fun. Well, not just that. It’s also pretty tough. (laughs) As a developer yourself, I’m sure you understand.

Yes, it’s tough, but in a good way. Once you awaken to the enjoyment of making video games, it’s more fun than playing them! (laughs) What you couldn’t do yesterday comes together as the days pass by. I love the way the whole thing just keeps chugging along. 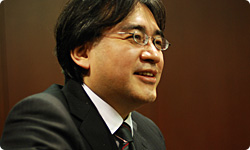 There’s a limit to how much one person can do, but what lots of people can do together is amazing. The process up to completion is interesting. It would be fun to make that itself a game! (laughs)

It would be difficult to turn that into a game! Shall we make that next? (laughs)

The scale of game development today is so huge that you can’t help but wonder how your own work connects to that of others. It’s easy to lose sight of what the point of your work is within the context of the whole project. For that reason, how you operate is important for each person to be aware of his or her role. When that happens, making something is a lot of fun.

Yes. And it’s great simply when the players respond. When they say, “That was fun!” it motivates you, so game development becomes something you can’t quit! (laughs)

Ah, I know what you mean. Even if they show you their dissatisfactions with the game, that’s better than if they simply ignored it.

Yes. In entertainment, it’s important to be talked about. If we’re on the same wavelength as the players and we share a common enjoyment, then we can aim higher when we make a video game.

That’s right. On a different note, I imagine that proceeding with two games at the same time is quite difficult. How did you divide up your energies?

I determine a plan for the larger elements, and then leave the rest to the staff. If I make suggestions to both teams about what they might do to please the fans more, their motivation goes up. That way, both teams work well.

I see. With both teams working simultaneously, they each think, “We can’t let them beat us!” so the overall level goes up.

Right. This time, some of the staff members are involved in both games, so know-how gained working on Resident Evil: The Mercenaries 3D shows up in Resident Evil: Revelations.

But even if you draw up designs for the complete game, it rarely turns out that way. Especially when it comes to new hardware, you can only guess about some things, so you don’t know much until you actually start working. Is that also how Capcom operates?

Yes. To be honest, we hardly ever operate perfectly according to schedule. (laughs) The staff is always trying out the games, so even if they point out small problems to each other, they don’t see the larger problems. That’s my job.

The role of someone not involved in hands-on development is to watch and check to make sure that the intentions behind the game will get across to the players. On the other hand, someone might reply, “If we change that, we’ll fall behind schedule.”

Right. That is always a problem. I concern myself with the bargaining that goes on surrounding quality, like, “Instead of putting that in, focus on this.” And it goes without saying that we must meet the due date and budget. But video games are something that people pay money for, so the contents have to be solid. I think the staff members share that view.

Generally, members of development teams that make products with lots of energy are energetic themselves. The company culture at Capcom puts me in mind of vigorous, athletic club types, so I would say that many on your team are, in a good way, “hot-blooded.” I think that is the “Capcom taste.” I think Capcom’s games are attractive to so many people because that energy reaches the players. Would you agree? 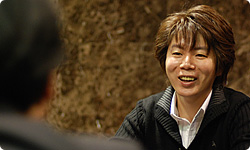 Some on the Nintendo team are the athletic club type, too. At a glance, the games we make in-house might suggest a staid group of developers, but the way they release their energy when making a game is similar to playing sports. When I was in high school, I played volleyball, so part of me reacts strongly to that spirit. And I think Capcom is like that, too. (laughs)

Yeah. When we joined Capcom, it was a good-old game company, so we had a free rein. (laughs)

Being surrounded by freewheeling senior co-workers gets a lot of work up and going. (laughs)

A lot of people at Capcom are former customers who like the Capcom culture, so the “Capcom taste” remains pure. The way we operate today is different than before, but we have maintained the quality of Capcom’s products through that culture.