DEAD OR ALIVE Dimensions will soon go on sale. I’ve heard that it features a stage from METROID: Other M.

Yes. Team Ninja and Nintendo developed METROID: Other M before this, so this time we collaborated on one of the stages. A character named Ridley comes out breathing fire, and if you fall off the stage, you get caught.

It’s like another dimension, so you’re thinking, “Are we going to fight here?” (laughs)

Yeah. we prepared a really far-out one. DEAD OR ALIVE is a fighting game that even allows something like this stage, so I hope people will play it.

Lastly, I’d like to ask if there are any new ways that you would like to make use of the Nintendo 3DS system in the future.

This time, we used the 3D for presenting the game, but next time I want to make software that involves 3D in the game design. When I read Miyamoto-san’s interviews, I realised that he designs games that can only be accomplished in 3D. Like games that involve jumping into the distance. 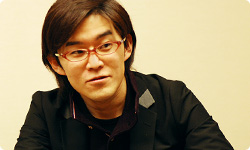 When I played Pilotwings Resort21, the 3D made it much easier to play, like when you go through rings. 21Pilotwings Resort: A sky sports game released for the Nintendo 3DS system on April 14, 2011 in Japan.

Right. There’s a particular enjoyment to a game designed specifically for 3D. While I don’t know exactly when I will land any such future projects, I think the challenge of the games I make from now on will be quite rewarding.

I do think it’s true that with the Nintendo 3DS system you can do things that you couldn’t previously. It’s a revolution unlike any other since the advent of polygons, so I’m excited about seeing how game presentation and gameplay will change.

Yes. As a gamer myself, I’m looking forward to seeing what kinds of new games will appear for the Nintendo 3DS system. And as a developer, I want to challenge myself in the kinds of games that I make.

I’m excited about someone opening the door, so that later on people will say, “That game changed everything about the way we design games.”

Yes. I’m looking forward to playing games by all kinds of game developers. But I’ll be incredibly jealous the moment someone achieves something that until then seemed completely impossible, so I want to find that door and open it myself!

This job is great in that you can treat the impossible as possible, figure it out somehow, and surprise everyone with it. Thinking something is impossible is our worst enemy.

Once when I talked about a gamer population expansion, I used the expression, “everyone from 5-year-olds to 95-year-olds.” At that time, some said 95 was impossible, but last year, I got a photo from someone in England. It was of a 96-year-old woman who appeared in a Wii Sports Resort22 commercial playing video games naturally. (laughs) 22Wii Sports Resort: A sports game released for the Wii console on June 25, 2009 in Japan.

In other words, we kept thinking that what at first appeared impossible may actually be possible, and as a result, we eventually pulled it off. When something that seems impossible at a glance becomes possible because of an idea or new technology, that is later considered an innovation. You will be really cool once you put out something that people consider an innovation. 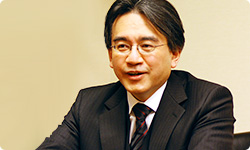 I suppose so. But... that places me under some pressure! (laughs) I’ve grown accustomed - in a good way - to game development and I’ve learned how to land the projects I work on, so I always try to ask myself, “Is it good enough?”

As you take more things for granted and nail down your own tried-and-true tactics and tricks, there’s a danger of it all becoming routine.

I can’t be satisfied just because I landed this project. At the moment, I’m reminding myself that I have to keep questioning myself and move on to the next project.

Yeah. It’s a competition on all sides!

Right. I think “healthy jealousy” is a good thing.

Game developers everywhere have it.

Everyone wants their work to be well-received, so when someone does something new that the fans like, you think, “Argh! They beat me to it!” (laughs)

Yeah. (laughs) I’m always enviously thinking, “What a cool game they made!”

In that respect, the Nintendo 3DS system is the hardware with the future ahead of it. You can enjoy making games for it, so please keep using it! (laughs)

You bet! I want to make games that make other developers jealous!

Thank you for your time today.

Thank you for having me.