After entering Capcom, what was your first task?

When I was young, I started by helping around everywhere. One of my duties was to bug-check various games because at the time there wasn’t a specific position to do that, but everyone valued my ability to tune FM oscillator.12 12 FM oscillator: Frequency modulation oscillator. A technology involving the manipulation of frequencies to produce sound using very little data, as implemented by Yamaha Corp. 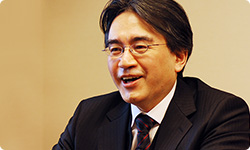 Is this really going to be titled as “Iwata Asks?” (laughs) We’re talking about stuff that would only be seen in highly specialised enthusiast magazines…

Speaking of FM oscillator, it was supposed to be really difficult to adjust the parameters for those things. The fact that you were able to do it means you were something like a master craftsman who could tell how well polished something was and with what degree of precision just by touching the surface of it.

Thanks for the compliment! (laughs) At the time, the music team at Capcom was comprised of people who had graduated from music colleges or art schools. I was the only one there with an engineering degree. That’s why they put me on the X6800013 team, and I began doing porting work for the music of Street Fighter. 13 X68000: A 16-bit personal computer released by Sharp Corp. in 1987.

You had to compose the actual tune in order to be able to output it as an FM oscillator. Wasn’t it a lot of work?

Yes, it was very hard work! (laughs) But that was my first point of contact with the Street Fighter game. As a result, I achieved a good reputation throughout the company. So, the next job I did was converting music to the FM oscillator for the SEGA Mega Drive system (also known as Genesis) for a different game. At that time, they sent me on a business trip to America for it. I was very lucky that I could check out foreign markets while I was still young.

How old were you at the time?

Wow. Meaning it was only two or three years after entering the company. That’s very early.

When I saw it for the first time, I experienced nothing but shock and surprise. I looked at how they played overseas and saw what people’s tastes were.

Were you able to communicate with the locals?

Oh, about that. At the time, there was this person named Yoshiki Okamoto-san.14 He was the kind of person that would act very spontaneously. Working with him trained me for stuff like that. (laughs) At the time, Capcom wanted to do licensing work with American comics and decided on working on a comic called Spawn15 as part of that effort. Okamoto-san told me, “Go to McFarlane Toys16,” to which I replied, “But I can’t speak English.” He just shot back at me, saying, “Don’t worry. It’ll work out somehow.” I ended up staying in America for months at a time, many times. Possibly because I felt like my life was in danger, I began to learn English just as a part of life. (laughs) 14 Yoshiki Okamoto: A former game producer at Capcom Co., Ltd. 15 Spawn: A popular comic from Image Comics, Inc. that was first released in 1992. 16 McFarlane Toys: A toy company established by the creator of Spawn in 1994. 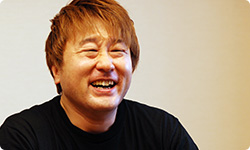 So, you were thrown into an environment where you were forced to learn. Is that how you learned English?

Yes. I really think this is thanks to Okamoto-san. After that, whenever I had meetings with local companies, I was able to communicate what I wanted to say. By building this foundation, I was able to direct things the way I wanted to. In other words, learning what the consumers want through their voices in person, not by books or reports, is what’s most important. This is how you can feel the tones and passions in their voices. Just knowing that is huge. That’s why I tell my staff members to talk to people even if they can only manage fragmented sentences.

When I was still a student, I wasn’t good at English. But the thing that turned things around was when I went to America for a business trip whilst at HAL Laboratory.17 A title that was being made by an overseas developer had to be finished within the year. I was simply told, “Do something about it!” However, I had no idea when I’d be able to go home. (laughs) The situation was such that I had to talk in English or the problem wouldn’t be solved. After experiencing that, I started to learn little by little. 17 HAL Laboratory, Inc.: A software developer that has worked on the Kirby and Super Smash Bros. series, among others.

That’s right. You had to finish things or you couldn’t go home. (laughs) It made me realise that communicating with just e-mail and data was insufficient. Even if you know what’s going on in the game stores in Japan, you’d have no idea what’s going on overseas. It’s a matter of how much information you can get out of the guys at the game stores there.

Depending on what the store staff recommend or not, game sales will change pretty significantly. But you don’t know what the difference is until you ask them directly.

Yes. It really depends on how you can synchronise the answers you get out of them and what the game developers want to make. You can’t promote a game from the business side of things in isolation. You have to listen to the raw voices of the people at the stores.

So, being forced overseas expanded your range as a developer. 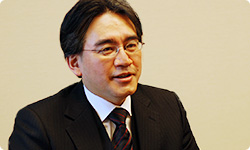 I think so. People often just say “Europe” in passing, but you really can’t call it just “Europe.” There are many countries, many cultures and many kinds of people there. It’s almost like every place is divided up, like a neighbourhood association in Japan. Each and every one of the associations has a different point of view.

You can’t just group them by country, as in England, Germany or France.

You can’t, So many things are different - even in neighbouring countries. You have to listen to each and every one of them. I mentioned earlier about how we still have the same goal but it’s just a matter of which path to take. I believe that thinking about what kinds of people the consumers are would be a good starting point. It’s like taking a sledgehammer to a job that needs precision. You can’t say, “Use this strategy for all of Europe.” Thanks to the repetition of that message, I think all of Capcom has finally taken that viewpoint.

I think you have to experience many things for yourself by going overseas. The things you see as a working adult, you’ll perceive differently from a travelling student. In order to understand all that, I think Japanese people have to go overseas more. One thing that I find really mortifying is how the words “look overseas” by Keiji Inafune-san18 were misinterpreted as “abandon Japan.” We’re Japanese, so we have to look at our Japanese consumers. There’s no way we can’t. 18 Keiji Inafune: A former Capcom game creator and character designer who worked on the Rockman (known as Mega Man outside of Japan) and other series.

The results are really different, depending on whether the work is to be accepted within Japan only or throughout the world.

Yes. That’s why everyone that makes games, not just Capcom, should always look out into the world. As long as I’m a game creator in Japan, I want other Japanese people to be successful, too. I want them to become warriors who can be effective around the world. That’s why they have to take the opportunity to research what’s going on overseas. If they don’t have that opportunity, then they should try to create that opportunity. That’s how they can start to change themselves. You can’t just bunch all of Europe into one entity. You have to think about how each and every place is different, and you should always maintain that mindset. Only then will you begin to see how things are structured on a more profound level. After that, you may be able to see how you can manage the differences between men, women, children, adults and the elderly. And not only game development, you may be able to manage things you couldn’t see from a standpoint of promotion or sales. I want everyone to see and understand those structural differences. 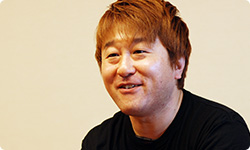 If you put it another way, if your product can sell a million copies there could be a million different reasons it was purchased. But we tend to only think about the one reason everyone bought it. The more we try to understand the various kinds of consumers we have, the more opportunities we can gain because of the differences in cultures and values. It’s either that, or we can find an angle like “this is common among everyone” and have every single person say some particular thing is fun.

You’re right about that. We have to prepare multiple entrances and pathways for the consumers. On the other hand, we should never construct the entries simply relying on our unfounded ideas. I’d like to create things by always thinking through such details as, “The top is structured like this, and this country is shaped like this, so…” As a creator, I want such details to be noticed.