Your history in game development began with arcade games.

When did you start working on games for home consoles?

Was Ridge Racer the turning point at which you went from being mainly a designer to overseeing a game?

I’d like to ask about THE IDOLM@STER. Most people might find it hard to understand how someone who had been visual leader on a racing game could also make a pop idol game.

How can both come from the same brain? (laughs)

(laughs) To go back to where we started, with Pac-Man, one of my basic beliefs is that anything that stimulates your instincts is good. They’re all the same game. To me, THE IDOLM@STER, Tekken14, Air Combat and Ridge Racer are all the same. If I say that, you might say, “They’re completely different!” but basically you refine certain elements and mainly emphasise those, so there’s no difference in that aspect. For example, in THE IDOLM@STER, all these cute girls coming out and singing and dancing isn’t a bad concept for guys. 14Tekken: A series of fighting games. The first instalment appeared in arcades in Japan in 1994. Developed by NAMCO Ltd. (now NAMCO BANDAI Games Inc.).

I can see that.

For Air Combat, you get in a fighter plane and shoot down enemies, which rouses a man’s spirit.

And Tekken is obviously a game about men battling it out against each other.

So they’re all about awakening a man’s instincts?

Yep. They’re all alike that way, so to me they’re not as different as everyone else thinks they are.

In other words, there are many similarities in the pleasurable feelings that arise in your head when you play. 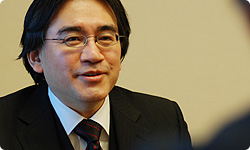 Right. You know how when you’re playing a game and something like adrenaline kicks in?

Yes. Some people refer to it as their “brain juices flowing”.

That’s the same for all games.

For example, each illustrator has his or her own style. The characteristics of the visuals suited to the separate worlds of Ridge Racer and THE IDOLM@STER are completely different, true?

But in the world of films, even if they treat completely different themes, a director—like Spielberg15, for example—might portray them in ways that are essentially the same. 15Steven Spielberg: An American film director and producer. He debuted in 1971 with Duel and has worked on many films spanning a wide variety of genres ever since, including such works as E.T., Close Encounters of the Third Kind, The Color Purple and Saving Private Ryan.

The themes are completely different and the visuals expressing them are different, but the mechanisms that move the emotions of the viewers are quite similar.

Perhaps you can think that way because you came to video games from the video production industry. I feel a little better now that I know how everything in your background is connected. (laughs)

What was your impression when Nintendo first showed you the Nintendo 3DS system?

When I first saw it, I sensed something almost palpable in the screen.

You mean the screen was like a window to another world with its own physical objects?

Yes. I really felt like there was something there. I’m not really sure how to describe it.

Did you immediately think that you wanted to make a Ridge Racer game for it?

Yes. The moment I saw it, I thought I wanted to make something for the Nintendo 3DS system that revolved around cars. When I tried out Ridge Racer on it, and the cars were really there, and I tried to move them, I found the way that I concentrated on the game was slightly different than before. 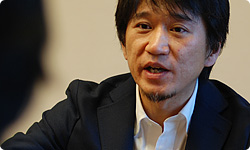 You mean that seeing the cars on a stereoscopic 3D screen feels different than viewing them on a 2D screen like before.

Yes. Completely different. It was a totally new feeling. I felt that there was something substantial, not just about the cars, but about the courses as well. I thought the game would get easier to play.

Because compared to the 2D games, it’s much easier to get a sense of distance depth-wise.

I’m always hearing people at third-party developers say the 3D makes a big difference. They say that racing games and flight games will get easier to play. We’ve realised that through our own tests, as well.

Yes. Actually, some people find racing games to be difficult.

If someone has trouble grasping a sense of distance, racing games can be difficult.

Right. People who are better at it can imagine the distance in their heads, but with the Nintendo 3DS system, the depth is just the way it appears. You can simply play naturally, so I thought it was really great. But when I actually made Ridge Racer in 3D and tried playing it, my times were slower! (laughs)

Ridge Racer is the kind of game that you could go full throttle in, but the courses feel much more realistic now, so on curves I couldn’t help but put my foot on the brake a little!

After I’d been around a few times, though, I began to get a sense of the timing, and my times actually improved!