In closing, then, could you say a few words to the "PES" fans, and to those who love football but have never played a football game?

First, I think returning "PES" fans will be able to experience new things and a realism that hasn't been there before. We gave our best to deliver in those areas, so we want people to pick the game up, look, and be amazed.

So when everyone plays the game you've created, you'd like them to feel the same surprise you felt when you first saw the Nintendo 3DS system.

Right. By and large, "PES" fans tend to really love football, and many of them actually play themselves. We created the game in such a way that even those fans would be able to experience new things when playing it. First of all, then, I'd love for them to see it. For the new players, I think there have conventionally been places that made them feel the operation skills required for football games were too difficult. This time, though, we've put in a competition function that utilises StreetPass10. So they can play a lot on their own, strengthen their team, and enjoy StreetPass matches. 10 A competition function utilising StreetPass: A StreetPass competition occurs when people with Nintendo 3DS systems pass near each other. When StreetPass occurs, players can enjoy the automatic competition between teams trained in the "Master League" mode of "PES 2011 3D - Pro Evolution Soccer".

I think more of them play alone. For example, with other multiplayer or online games, the main goal is to play for your own satisfaction, where there are no clear winners or losers. Unlike other games, when you play against people in football games there will be a winner and a loser whether you like it or not. 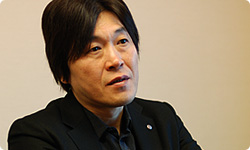 In other games, you've concentrated on a certain part and are satisfied with it, so you may not mind letting other people have other victories, but in "PES", the only index of evaluation is whether you've won or lost.

That's right. People who aren't good at playing against other people have a hard time winning. That's why we prepared another way of playing; where you can strengthen your team by playing against the computer, then win in StreetPass.

You mean that you've opened the door in a different way for people who love football but haven't played football games before, and are waiting for them to come in.

Even as we strive for the ultimate football game, we keep trying new ways to get football fans interested in playing our game.

It seems contradictory to say that you want people who've mastered "PES" to be even more satisfied with this, and also that you want to attract new players. But both really can be done.

That's right. In that sense, I think diversity is really important. I thought we had to have both realism and diversity.

Only, if you made it truly "real", normal people wouldn't be able to play anymore.

Well, that's very true. For example, if "real" means "matches in football games will actually last more than 90 minutes", then it's not possible. (laughs)

No one would be able to concentrate that long. (laughs) That's why video games need to make players feel reality, but at the same time include elements that let them think "Hey, I'm awesome!" Adjusting things so that the impression players get from a game match is comparable to that from a 90-minute football match is really that part that requires techniques from masters of the craft. 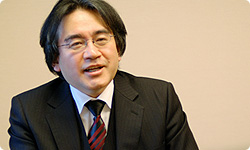 It really does. There's no point in creating a game that only pro football players can play.

On the other hand, if pro football athletes tell you, "This isn't football", you've lost.

With us working together on Nintendo 3DS, we'd like to offer a brand new form of excitement to both first-time players and fans of the series. So we don't want people to miss out on this experience, right? Thank you very much for your time today.