As football games continued to evolve, "PES 2008 - Pro Evolution Soccer"9 was produced for the Wii console. I think it must have been a big challenge to take football games, in which the focus was on the control of the player who had the ball, and think about how to change them. So "PES 2008" was a new innovation, and I think it created a new trend. What are your thoughts on that, Enomoto-san? 9 "PES 2008 - Pro Evolution Soccer": Dubbed the "Winning Eleven – Play Maker" series in Japan. Its first game, " PES 2008 - Pro Evolution Soccer" was released for the Wii console in February of 2008 in Japan. Using the Wii Remote controller's functions, you can give orders to players other than the one with the ball, or have them run into open field.

What triggered that was our dissatisfaction with the AI for "PES" at the time. We made a list of all the things you couldn't do in the previous "PES" games, and made that our new evolutionary form, the one to aim for. That's where it began.

In a sense, it laid down a gauntlet to the conventional "PES". Even though it was getting better year after year, you must have felt somewhere that, if you didn't do this, there was a wall you wouldn't be able to overcome.

Right. With the AI we had then, even if you imagined wanting to get off a pass to an ideal place, there wasn't a player there.

In football games before "PES 2008", if you fired off a pass into open field, it was very unlikely that an athlete would come running to get it.

Sometimes an AI athlete would be there, just by chance, but it wouldn't have happened on purpose. It was difficult to tackle the problem with existing controllers, too.

And just when you were thinking that, the Wii Remote made its appearance, and you had something that would let you indicate any place you wanted on the screen. I bet it was probably quite a battle to get your developers to change direction, though. After all, they had their own track records and were used to the old way.

It was very hard. They asked me, "Are you disowning the previous games, then?" But that absolutely was not the case; I thought that the evolution of "PES" might involve a new path, one that broke with convention. It was encountering the Wii input devices that enabled me to imagine it. 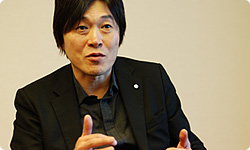 So, because you felt that you could build a new control system if you had Wii, you thought, "I know this will have a positive influence on the future of 'PES'", and "It's worth a try".

Your role is to have a bird's-eye view of production as a whole. That was something only someone in your position could do. It's normal for people to feel uneasy and resist change. Sometimes when things are too new, they'll even say, "There's just no way". What was it that made them decide to give it a try, even so?

We really couldn't materialise that system with the AI we had at the time. So, in order to provide some incentive, I created a Wii team, and sought a more dynamic change from the existing team.

It seems to me that that intention influenced not only your own company, but the world of football games itself, years later. You were certain that doing this would change the state of the game, weren't you?

Right. In order to aim higher, we needed to change. I thought, since our ultimate goal was to be able to recreate everything that happened in the stadium, we couldn't afford to idle here.

It feels as though the challenge you met in "PES 2008" was an innovation for football games. In general, in Japanese, the English loan word "innovation" tends to be translated as "technological reform". However, taking something that most people in the world had assumed was obviously impossible and making it real - in other words, making the impossible possible - and having people acknowledge that there was value in that change… I think things like that tend to be called "innovations", in retrospect.

By the way, something that's often said about brilliant football players is that it's almost as though they have eyes in the sky; how else could they have known to pass over there? It seems to me as though that's tied to the change in "PES 2008": when you changed the AI, was it because you wanted to make it like a football player with a wider field of vision?

That's right. Football players with wide fields of vision see space just by moving their faces for a split second.

That means that, with just that one glimpse, they deduce what the ball's going to do and the subsequent movements of several players, playing it all out in their heads. 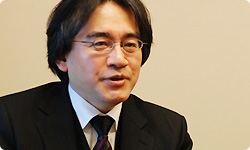 That's it exactly. In the games we make, too, no one ever passes without looking at the other person. It’s about those little things. If you replay it and watch, their faces move just a bit before they pass. When the real thing happens in a stadium, it includes details like that as well.

I see. That really speaks to how serious you are about recreating everything that happens in the stadium.

But, when we've reached our ultimate goal, football will have changed again…

So the challenge will never end.