In a football match, you have to have eleven team members moving around. However, in a game, you can only control one athlete directly, so the rest have to be moved by AI. Does that mean the creation of the AI is at the heart of football games?

Yes. Fundamentally, the AI is an absolute necessity. Honestly, I think computer AIs today are still far from their ideal form in all current video games throughout the world.

It's true that, while the rendering on graphics is now so good they might as well be photographs, AI still has quite a ways to go in comparison.

That's why people tell us that it's more fun to play against other people. Actually, in "PES", the AI is basically geared towards defence. It's a football game: if players get sent-off one after another and it turns into a match of 10 against 8, it won't be football anymore. So first of all, the balance of how to mount an offense without letting them destroy the defence is important. One other thing that's important with AIs is the animation of the athletes. We have a motion capture studio at the company, and we've taken captures of the development staff's movements, to use for the motions for the techniques.

We have asked J. League (Japanese football league) members and professionals for help before, but we can't have them do things that are too dangerous over and over again, and we can't do retakes the way we'd like to.

True. For a professional, their body is their capital: they've got to take extremely good care of it.

Right, so their managers will stop them from doing things. For that reason, it's best for us to put motion capture sensors on employees and capture that way. There's certainly a difference in musculature between athletes and amateurs, so there will be a clear difference in things like speed on a kick, but we want to capture the movements we're looking for over and over, as thoroughly as we can.

In the end, the persistence of that repetition, the passion and the sheer amount, change the quality of the game. 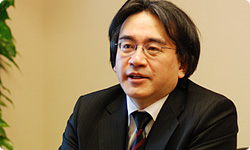 That's right. It really is a question of where to compromise. We can modify the captures after we've taken them, but it's better to just capture them again.

I'm sure there are some very good football players on your staff, but even so, that's really something. I feel as though motion-capturing staff over and over again might sound strange to some people. (laughs)

Since the goalies dive many times, it may be dangerous for a pro to do it as they might get hurt. It’s also something that would be rough on them physically. But our staff can take turns to do such things one after another to do as many captures as we like.

Yes, one person couldn't do something like that too many times in a row (laughs). You have to expend a ton of energy very quickly for things like that.

True. So you see, the team members that participate in the motion capturing are involved very deeply in the game: their movements, not just their production work, are included in the football games they make.

I bet that turns into a different sort of motivation, doesn't it? Even though this is a job where you spend a lot of time sitting at a desk, I think the sites for actual game development tend to feel pretty athletic. It's the same with the teams for the "Mario"6 and "Zelda"7 games: when players make a mistake, they want to inspire them to try again, and again and again, and, to me, that way of thinking is also truly athletic. But if the "PES" team is actually physically moving their bodies, that's quite a bit more athletic! (laughs) 6 "Mario": The "Super Mario Bros." series. The first game was released for the Nintendo Entertainment System in September of 1985 in Japan. 7 "Zelda": "The Legend of Zelda" series. The first game was released for the Family Computer Disk System in February of 1986 in Japan.

Well, if we didn't do it like that, once we put the images in the game, if the motions weren't the way we wanted them, we couldn't just say, "We're capturing these again first thing tomorrow morning". We'd lose that feeling of speed. 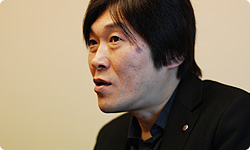 So you capture the motions you want to recreate with the AI, put them into the game to check them, and if it doesn’t connect well with the rest you capture them again… You've repeated that cycle for one year, and accomplished an absolute ton. That's probably one reason that "PES" has advanced so far in such a short time period. Does everyone at your place become well-versed in football?

Yes. When we first started, there were some who didn't know much about football, but now it's become life's work for them; even when they go home, they watch matches, just for fun. If they weren't that sort of people, they couldn't create scenes that would make the fans happy.

The people who think up the AI principles must give a lot of thought to what the players are thinking, and about where they're making decisions. As you work on mastering the production of football games, do you find that the way you watch matches changes?

I bet matches get even more interesting.

When I watch a match, I predict what the next action will be; when I'm proven wrong, it makes me aware that there's still so much potential there. I think, "This player is doing things I've never seen before…"

The quality of football changes with the times, doesn't it? New athletes appear, they learn how to do new things, new tactics are created, and it all changes the flow of football. You probably spot those things pretty quickly, don't you?

I think so. Speaking of tactics, for example, the zone press8 is a tactic that was produced in order to take down a certain athlete, but somewhere along the line, they realised that it's actually effective against all athletes. 8 Zone press: A defensive tactic in football.

It did have that history behind it, didn't it?

Yes. That's how things become standard. Today, it's turned into a common tactic.