Lastly, I’d like to hear any final comments you may have. First, could you tell fans of previous Warriors games what kind of game SAMURAI WARRIORS: Chronicles is and what they should pay attention to?

Sure. As mentioned earlier, we portray a long story based on history and you get to participate as your own player-character and interact with the warlords, which is a big point, so I hope fans who have played the previous Warriors games all this time will pay attention to that. And even though it’s a handheld game, all the lines are in full voice, and we redid all the scenarios. What’s more, you can swap warlords by using the Touch Screen, so I definitely want players to experience this new Warriors game. And actually, making a two-screen Samurai Warriors was an idea I’d been turning over since long before development for the Nintendo 3DS system. 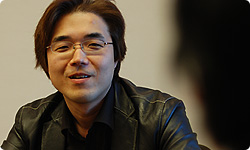 Oh, I see. You didn’t force yourself to adapt it to two screens for the Nintendo 3DS system, but it was an idea you had already had.

Yes. I keep something like a notebook of ideas. I try to write down new ideas as soon as I think of them, and it was an idea I wrote down a long time ago as something I wanted to do sometime. I thought two screens, one a Touch Screen, was good for always generating that sense of one against many.

And you realised that the time had finally come to use that idea you’d had all this time.

Yes. I wanted players to always experience that feeling of one against many, but if that’s all there was, the game wouldn’t move forward, so I wove in the story, and the result was a good balance, I think. I want players to feel exhilarated as they play the game.

Could you please tell people who are new to the Warriors series what is fun about SAMURAI WARRIORS: Chronicles?

Yes. I want people who have never played the Warriors series before to experience that exhilarating feeling of one against many, which is the core element of the Warriors games. And for Japanese people, the setting is the familiar Sengoku period of 400 to 500 years ago, so they will discover what happened long ago near where they live. You can learn about Japanese history, so I hope players will enjoy that aspect of the game as well.

There virtually isn’t a Japanese person who doesn’t have any interest in or knowledge of the story of the Sengoku period. 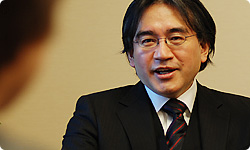 You can follow the course of history, and in that respect it’s a rather unique kind of play.

Japanese people - including me - watch things like period dramas on TV over and over, even when they’re about the same historical epoch.

This isn’t exactly the same situation as history being written by winners, but the story sometimes changes drastically depending on the viewpoint of the portrayers and the characters that appear.

Yes. In that way as well, this game handles even the battles that mediums like TV period dramas can’t address. Players will discover what happened where in Japan and what happened in their own neighbourhood, so I hope they will enjoy that.

I’m from Hokkaido Prefecture, though. There weren’t any warlords of the Sengoku period around there! (laughs)

But before I came to Kyoto, I lived in Yamanashi Prefecture for a while. A notable feudal lord from there would be Shingen Takeda. The respect and affection for him around there is so great that outsiders just can’t keep up! (laughs)

The respect for local warlords is very deep! (laughs) I think it would be great if players find this game helpful in learning more about those leaders, too.

I’d like to ask one final question before we finish up. I think people who haven’t played the Warriors series or who aren’t very quick with their hands don’t know that they too can play this game. What do you think about that?

The games in the Samurai Warriors series can be played by pure button-mashing. We check to make sure you can beat them just by punching a single button. Even people who don’t play action games at all can enjoy playing them as long as they keep pressing buttons, so I hope even people who aren’t very good at action games won’t hesitate to play it. 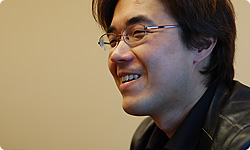 It’s actually okay for players who think they aren’t very good at action games - like people who find anything after World 3 in Super Mario Bros. to be a little hard.

Yeah. You won’t fall into pits! (laughs) In part for that reason, just under 40% of Samurai Warriors players are female.

That many women play it? Why is that?

When we portray the warlords, we don’t distinguish between one who is on the side of justice and one who is villainous. Rather, we make it so they’re all heroes. We portray positively even someone who has been portrayed negatively in history. Whichever character you choose, you can finish the game with a good feeling.

I see. So even if someone did something wrong in history as written by the winners, that person had his own sense of justice and his own motivation and beliefs. When you portray events from that point of view, a new appeal arises.

Yeah. I think players sympathise with that, so women also pick it up.

The warlords in the Warriors series possess a certain glamour, more so than in TV dramas about the Sengoku period, which must have attracted many women as well.

I don’t know if that’s why, but they send in all kinds of chocolates on Valentine’s Day.

Huh? Addressed to the warlords in Samurai Warriors?

Who eats those chocolates?

The staff. It’s not like the warlords can! (laughs)

(laughs) I suppose not! I had fun talking with you today. Thank you. 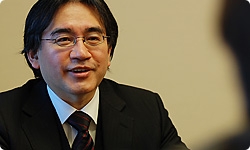