2. Smiling over the Manual

What was the first work you did after joining Koei?

My first work was adapting a computer RPG for the Super Famicom system.

But did studying computers in university prepare you for jumping right into video game development?

I was, of course, taken aback at first and I had some difficulty, but I was extremely interested in the work, so things went surprisingly smoothly.

It was suitable for you.

My degree subject was in electronic and computer engineering, so I was thoroughly versed in computers and mathematics. But when I was studying, I thought, “Once I go out into the world, this won’t come in handy.” (laughs)

University study is like that a lot. (laughs) You have to learn a bunch of stuff that makes you think, “What’s this good for?” But later on, almost everyone thinks, “Oh, so this is what it was for!” and “If I’d only known then what I know now, I’d have studied harder!”

Yeah. (laughs) After entering Koei, I thought it was good that I had studied physics and matrix mathematics.

Working as a programmer can be fun because you have to keep up with new devices and, also, you get to make the games themselves. What have you found to be fun in your work to date?

For about ten years now, I’ve been walking the fields of programming, participating even in new hardware development and writing lots of programs. I’ve done my work largely out of a desire to do new things with new hardware.

The arrival of new hardware alone is exciting.

Yeah. It was always so much fun I could hardly contain myself. I got excited just reading the manual for new hardware. To others, I must have looked weird. (laughs) I mean, I’m sitting there grinning as I read the manual!

I know what you mean! (laughs) You start grinning just by thinking about what you can do with certain hardware.

I doubt the ordinary person out there can understand, but it’s exciting just to think, “Oh! It’s got this!” and I can’t help grinning. (laughs) 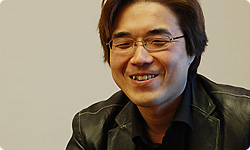 Yes, that would look suspicious. (laughs)

What work were you involved with after the Super Famicom port?

What led up to them asking you to become a director?

Ever since I was a programmer, I had often chipped in my opinions on game content.

You had played video games ever since you were a child, so you couldn’t suppress your views on the contents. (laughs)

Yeah. (laughs) I’d been visiting arcades since the second grade, and I can remember clearly how I couldn’t buy a Super Famicom system in November when it came out because it was sold out, so I kept going to the shop until I could finally get one the following March. In any case, I had played video games the whole time, so I couldn’t help speaking up. I guess that’s also just my personality. (laughs)

(laughs) You naturally express yourself orally, whether smiling while reading technical manuals or saying what you think would be fun in games you were working on.

Yes. I was really cheeky sometimes, saying things like, “If you release it like that, it won’t sell.”

If you say it like that, you could get on the other developers’ bad side! (laughs)

Yes. When I was new, I got into a big argument with my manager. Ever since my first year, there were things that I wouldn’t settle for with regard to game content. I think they chose me to be director because they had been watching that attitude.

I think that was a discovery in gameplay. Were you involved in the birth of that? 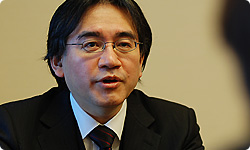 I wasn’t involved in its conception, but from what I’ve heard, the first Dynasty Warriors began as a one-on-one fighting game, but since the hardware performance had become more advanced, the people involved thought if you were going to play as a warrior from the Romance of the Three Kingdoms, it would be better to be able to wreak havoc against armies of enemies, be able to run around the battlefield on horseback, and being able to do a great deed that would influence the outcome of battle.

It must have been quite a challenge to have that many opponents moving around back then.

Before becoming director, I had worked as main programmer for a game called Kessen16, in which the player controls groups of characters. 16 Kessen: A simulation game about the Battle of Sekigahara. Released by Koei Co., Ltd. in March 2000 in Japan.

You experienced moving many things at once when working on Kessen.

The Warriors series became Koei’s main title, and games in the series piled up. While you have to respond to the fans’ expectations, it is also important to figure out what to do so they won’t say you’ve fallen into a rut.

Yes. I think it’s important not to churn out games in a series as if it’s easy. The core theme of the Warriors series is the exhilaration of the word “ikkitosen” - one against many. Never departing from that is a tacit rule. 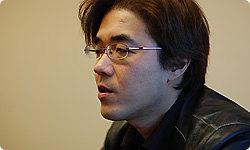 Literally, “ikkitosen” means one person fighting against 1,000 opponents. By achieving that in a game, anyone can experience the feeling of dominating everything else.

Yes. The challenge for us is keeping that exhilaration of one against many while also introducing something in a different direction. We started Samurai Warriors as a different framework for the Dynasty Warriors 2 concept.

What brought about the birth of Samurai Warriors?