1. Visiting the Arcade in Year Three

Today I’m talking with Koinuma-san, who is in charge of the Warriors series1 at Tecmo Koei Games.2 Thank you for coming today. 1 Warriors series: A series of games with its roots in the game Dynasty Warriors 2. It consists of 3D action games in which players fight multiple opponents. The series has many games such as Samurai Warriors, Dynasty Warriors: Gundam and Fist of the North Star: Ken's Rage. 2 Tecmo Koei Games Co., Ltd.: The company formed when Koei Co., Ltd. and Tecmo, Ltd. merged in 2010. Headquarters: Yokohama City, Kanagawa Prefecture.

Thank you for inviting me.

Before we talk about SAMURAI WARRIORS: Chronicles, the new game for Nintendo 3DS I’d like to ask about how you first got into video games. How long ago did you first encounter video games?

My memory is a little foggy, but I was definitely interested in video games in Year Three of primary school.

What kind of games were you interested in then?

I especially liked an arcade game called Head On.3 3 Head On: An arcade game released by SEGA Corporation in 1979, widely recognised as the first dot-eating game ever.

Oh, Head On? There was a maze and you raced your car through it while picking up dots, right?

What made you interested in arcade games as early as Year Three?

I have a brother three years older than I am. He took me to an arcade run by the family of one of his friends. 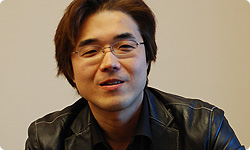 You formed a connection with arcades when you were still relatively little.

I see. So that’s when you became interested in playing video games. When did you start thinking about making them?

I started thinking about making video games in Middle School. Do you know about the magazine “BA(bay)-Maga” that existed back then?

Yeah. There was a page in it for submitting your own programs.

The Internet didn’t exist back then, so monthly magazines were the main source of information. You could try out the programs found in it or mail in programs you had made yourself.

Right. Personal computers were really expensive back then, and I was just in Middle School, so I couldn’t get one. But I imagined programs and wrote them out by hand just for fun. Even though I didn’t know if they would work! (laughs)

I think a lot of people who took an interest in video games back then approached them from the aspect of programming. I’m an example of that myself.

Yes. I wanted a computer badly and pleaded with my parents to let me use some of my Otoshidama savings to buy one, but in the end they never let me. (Editor’s note: In Japan, children receive gift money called “Otoshidama from their parents and relatives during the first few days of the New Year, but their parents often take a hold of it to control their savings.)

So for quite a while you were a programmer in imagination only. (laughs) 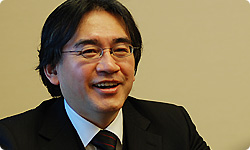 Yeah. (laughs) I would go to my friends’ houses and have them let me use what we called hobby computers - like Family BASIC7 and Pyuta.8 I think that continued up through about secondary school. 7 Family BASIC: A peripheral product for the Famicom released in June 1984. It had a keyboard for users to create their own simple video game programs. 8 Pyuta: A hobby computer released by Tomy Kogyo Co., Ltd. (now Tomy Co., Ltd. a.k.a. Takara Tomy). It allowed users to make their own video games.

So you didn’t get to use computers very much until you went to university?

Right. There weren’t many universities or departments focusing on information technology back then, but I wanted to go somewhere with good computer facilities, so I entered the Department of Electronic and Computer Engineering at Tokyo Denki University. That’s when I started using computers regularly.

Did you use the school’s computers a lot even aside from class-related activities?

Well, to tell you the truth, I liked video games so much that I actually worked part-time at an arcade from secondary school until graduating from university. So I was playing video games at the arcade a lot. (laughs) 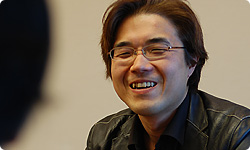 (laughs) When it came time to choose a job, what did you think about as you decided on a company?

I had decided even before going to university that I wanted to work at a video game company.

Oh? So that’s why you chose the department?

Yes. The only job hunting I did was to apply to about three video game companies. In 1994, I got into Koei9, or what’s now Tecmo Koei Games. 9 Koei Co., Ltd.: A video game developer and distributor founded in 1978. In 2010, it merged with Tecmo, Ltd.

Why did the astronomy club’s room have a copy of Romance of the Three Kingdoms?

The computer was originally for simulating the heavenly bodies, but one of the older club members had brought in Romance of the Three Kingdoms.

And you played it. (laughs)

Yeah. (laughs) That’s how I learned that a company called Koei existed. And there was a “Dagashiya” (snack shop) that let me play its computer when I was in secondary school. (Editor’s note: Around the time of Mr Koinuma’s childhood and adolescence, small family-owned snack shops called “Dagashiya” were commonly seen throughout Japan. These stores mainly catered to children and sold snacks, candies, toys and trinkets)

Huh? You played a computer at a snack shop?

Oh, you had to pay for the time you spent playing. 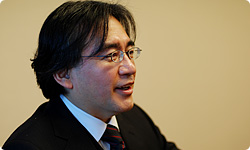 I have seen snack shops letting kids pay by the hour to play the Famicom system, but…

Some did it for computers.

That’s how I first played Nobunaga’s Ambition. So for me, Koei was…

It’s a company you were familiar with since secondary school.

Yeah. That’s how I decided to be with this company.

I see. Life works in mysterious ways. I think fate guides us to the people we meet, and helps decides where we are now.