Also, when we made this game for the Nintendo 3DS system, we had a different type of customer in mind than ever before.

There was a reason for that. When I watched an American pro-gamer tournament called Major League Gaming13, they had a Tekken and Super Smash Bros.14 section, and the type of participants and their reactions really made an impression on me. The participants at Tekken were all over eighteen - it was a group of big, brawny guys. Some of them were almost in their forties. 13 Major League Gaming: One of the biggest profession gaming leagues in North America. 14 Super Smash Bros.: A series of fighting action games. The first game was released for the Nintendo 64 system in April 1999.

So it was all guys who looked like they should be characters in Tekken. (laughs) 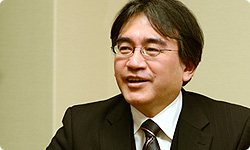 Right. I was thinking, “It’d be faster if you just fought in real life!” (laughs) On the other hand, Super Smash Bros. had everyone from adults to kids, even women so I thought they would be all playing cheerfully together, but there were these deafening cheers coming from them playing tournaments, like “Auuugghhh!” I saw that and I was convinced that participants feel the same things while they play Super Smash Bros. and Tekken.

Even though the way they express it may be a little different, the part of the brain feeling that rush is the same.

Seeing that and thinking, “I want these people to play Tekken, too!” was one of the things that lead us to release it for Nintendo 3DS.

What was the thing you most kept in mind when it came to making Tekken for the Nintendo 3DS system?

Did you decide in the very beginning to include the movie?

Yes. Actually, that was what I most kept in mind, because no matter how good something is, if you don’t open several doors to it, people won’t watch it. I was thinking about how we needed something more than just a simple fighting game, and the Tekken movie was being made in 3D, and I thought that could be a big gateway.

It appears that things that were occurring in different places were naturally coming together.

That’s right. So I hope it will reach people who maybe haven’t played fighting games in a while but are still sort of interested in them. I want it to appeal to people as being a little different from any other Tekken, by putting as many characters as possible on the package, and saying that the movie is included. 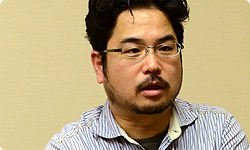 I feel like there are a lot of people who used to play fighting games but haven’t kept up with them. Ikeda-san, were you involved from the very beginning?

No, that was during the crunch period for Tekken Tag Tournament 216, so Harada-san was working separately, and we worked with Arika17 to help us develop the game. I joined the project in or around July of last year (2011). 16 Tekken Tag Tournament 2: A 3D fighting game released as an arcade game in September 2011. 17 17. Arika Co., Ltd.: A video game developer in Japan.

What we were most particular about in terms of technology was, “We have to retain 60 frames per second (FPS)18 at all costs.” If someone says, “It lags when it’s made 3D,” then you get the impression that that’s the kind of game Tekken is, so right from the beginning that was a condition that I wasn’t willing to budge on. 18 60 frames per second (fps): Animation using 60 image frames per second. The more frames there are, the smoother the animation. In Tekken 3D: Prime Edition, the game supports 60 frames per second during wireless play, but stereoscopic 3D display is not supported.

The Mario Kart 719 team said the same thing. That’s related to how pleasant the final controls feel, isn’t it? 19 Mario Kart 7: An action-racing game released for the Nintendo 3DS system in December 2011.

That’s right. We were making the animation under the condition that it had to be 60 FPS, so if you reduce it to half by making it 30 FPS, the moves don’t look very nice. At first, I was nervous whether or not we would be able to do that.

We were also including the movie, so it was also a fight in terms of capacity. The movie is in 3D, so it’s a massive amount of data. So it was one of the most difficult things we’ve done to ensure the capacity for the game, fit the movie in, and make it easy to watch the movie right away after you play the game. 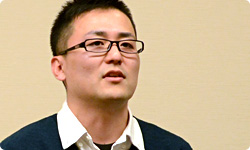 At first both the programmers and the people from Arika said, “You’ve got to be kidding!” (laughs) Only, we anticipated that the Tekken movie’s 3D would work well with the stereoscopy of the Nintendo 3DS system.

When you put on 3D glasses for computer graphic movies it makes the screen a little dark, but they’re easy to watch on Nintendo 3DS both in terms of the size of the screen, and because you can watch them without any glasses on. I was sure that it would be a good fit because your eyes are able to follow even the big action scenes.

What were your impressions when you had the moving video game in your hands?

The first thing I did was make sure that it was really a video playing from the Game Card. I turned the Nintendo 3DS system upside down a few times to make sure it wasn’t connected to anything! (laughs)

You turned it upside down to make sure that the video was really playing from the Game Card? (laughs)

Yeah! (laughs) I thought, “Even though there are so many characters to select, and such a long video, it’s so much. Would it really all fit in a single Game Card?” And well, of course, it did.

We’ve had short clips up until now, but this was the first time a full-length movie was included in a Game Card for the Nintendo 3DS system.

Harada-san turned the Nintendo 3DS system over several times to look at the bottom and I was thinking, “What’s he doing?” and now I finally know. (laughs)

I confirmed that it was coming from the cartridge and I was so impressed by it. It was moving! (laughs)

So you were just honestly impressed by what we can do these days with something that you can bring with you wherever you go. (laughs)

It’s hard to play the game at the office or at school, but I’ll be glad if you can show someone a scene from the movie, and I hope that can become a way for more people to learn about it. Like, “What’s that?” “It’s Tekken!”

So you’re glad the movie was made in 3D.