5. About the European Packaging

What did you think about the overseas reception of the Professor Layton series?

It was better than I'd first hoped. The Professor Layton series was made with solidly Japanese sensibilities, so I thought the overseas audience might think it a bit off-base. The world in the Professor Layton series is very conveniently contrived as a London from a different world, not the one in real English history; it's a type of parallel universe. In order to make the worldview of that London as appealing as it could be, we ignored period settings such as cars and telephones.

So to facilitate the story, you thought up this incredibly convenient setting, this "London from another world."

Yes, so it's possible that the overseas audience accepted it as a fun sort of fantasy world.

Even at Nintendo, many of the products the world has accepted weren't made consciously right from the start. I think the Super Mario series was accepted because the things expressed in the game held a kind of universal fun that people everywhere recognise. And this relates directly to the Professor Layton series: in the autumn of 2005, when Brain Training started to sell well in Japan, I went to America and Europe to describe the game, and at first, the response was very cold.

In Japan, about the time More Brain Training22 had been released and was turning into a huge hit, the folks overseas made up their minds to sell it in earnest, but the concept of brain training didn't really exist there at first, so we didn't know if it would really work in the global market or not. It was just like that with the Professor Layton series: it was software that fit into the space left by Brain Training in Japan, and when the overseas audience recognised that, then it became a hit. 22 More Brain Training from Dr Kawashima: How Old is Your Brain?: The European title of software released for the Nintendo DS system in December 2005 in Japan.

Actually, Professor Layton and the Curious Village didn't come with localised audio except in English. And in Europe, most countries don't watch movies with subtitles, so we were told that playing the game while listening to another language felt alien to them. It got off to a terrific start in the UK, though, so much so that it startled us. So when we really pushed it in a certain country where the language was not localised, sales took off in a big way there, too. The rest of Europe saw that, and then it really started to sell.

Hearing that this was a trilogy from the beginning, I pitched to the people in Sales in these markets saying how it's worth investing in this game because two more will follow. I think that, if something had gone just a little differently, we wouldn't have had the results we have today even though, of course, the software itself had elements that were enjoyable regardless of national boundaries.

That's right. One other thing that made an impression on me was the European packaging. The packaging for the Professor Layton series sold in Europe is different, different from the packaging for all the other areas. The design was proposed by NOE23, and is logo-centric. To be honest, I was against it at first, and we argued. Professor Layton and the Curious Village was sold as a fusion of puzzles and the story, so I told them I wanted the packaging to show the story, the way the Japanese packaging does. But NOE stuck to their guns and wouldn't budge. 23 NOE: Nintendo of Europe

If I remember right, the American packaging is similar to the Japanese packaging. But Europe challenged you, even though you, the creator, had turned down the idea.

They sure did. Nothing like that had ever happened in my dealings with Nintendo before, so I hadn't expected it. But NOE were recommending that packaging because they'd determined that Europeans would accept it. Ultimately, then, we moved forward using the packaging they'd proposed; that said, it was hard to understand that decision, at least from my perspective, so I really was taught a lesson this time. Thinking about it now, that packaging really was very good. 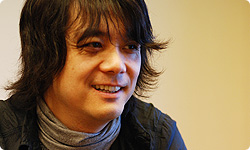 I think that packaging and the advertising that was created locally were structured so that they popped the game right into the hearts of potential customers of the Professor Layton series. It's probably because they were sure of that that they were so stubborn in their request, even when they knew that the person who'd created it was against it. So I think it was a really good thing that we worked together on the Professor Layton series and produced the result we did.

Yes. So, ever since then, whenever NOE proposes something new, my answer is always an immediate, "Yes, please do!" (laughs)

Even if it isn't what you want, you'll hear them out, you mean. (laughs)

Right. I think I have a fairly decent understanding of European tastes, but even more than that, I've become able to build a trust relationship with the other side and move things forward that way. Of course, we give them our own opinions, and they think about those over there, too, so it feels like we're able to make progress in an extremely good way.

I did get the sense from that proposal that people who were really in love with this product had racked their brains trying to figure out how best to communicate to the people over there how good it was. I thought that might be one of the factors that brought about the sales results in Europe. So, at first the global appeal of this product was uncertain, but now it's doing this well. It feels as though that requires more than simple localisation and translation; you need to have all that power behind it, the whole force, including communicating the great things about the product to the people in that region in a way that's easy to understand. 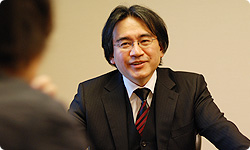 You're right. I think all the things Nintendo did played a huge part in making the results from Europe as great as they are. Because, honestly, the sales of the Professor Layton series in Europe surprised us, too.

In the end, it does all come down to the population; when something is accepted in an area with a lot of people, there's a lot of power there.

I really do think that's it.