Finally, if you had to communicate one single thing to our readers about New Super Mario Bros. Wii, what would you each say?

One single thing, you say…

If you’ve got more than one thing to say, that’s fine! You can say three things if you like! (laughs)

This time round, the game will have a whole new feel to it when you play it together with other people.

How would you respond to players who might say: "But I don't have anyone to play with!" Would you tell them to stop saying that and just invite someone to join them?

Yes, I’d encourage them to invite someone to join them. There are elements to the gameplay now that haven't existed up to now, so if at all possible, I'd like people to try asking a family member or friend to join in. Even if you think they’re not going to be interested, twist their arm and get them to try it. If you do that, I'm absolutely certain that they'll enjoy it.

This is an element to the game that’s taken twenty years to realise, after all.

That’s right. Also, we've made this game a little more challenging than the last DS title.

I imagine the three of you probably took it quite hard when some people said that the DS version was a little too easy. Miyamoto-san in particular.

I think that was particularly true of Miyamoto-san. So this time we’ve got a difficulty level the player can enjoy. I’d really like people to experience this for themselves. There are times when you’ll think: “This game’s a pretty tough nut to crack!” 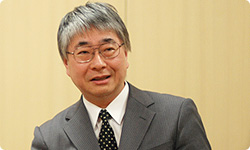 But even if there are tough parts, you've always got the Super Guide so beginners can relax and enjoy the game as well.

Right. And what's more, we've got some really great videos included among the Hint Movies.

You can see incredible videos of the experts at Mario Club playing, can't you?

Sometimes they’re so good that you’ll find yourself laughing out loud! (laughs)

But recording that footage was extremely difficult. We had to get them to replay the same parts time and time again.

There were even times when we'd consider throwing in the towel.

A small change might affect the timing for a jump just a tiny bit and we’d have to go and take the footage again from the start.

Some people think that the computer was playing, but it really is all flesh-and-blood human players.

A computer would never come up with the kind of ideas those players have. In the end, you have to record actual people playing.

It is really tricky to record these videos though. For that reason, some members of the team would request that we let them correct things manually. But I had to put my foot down. If it’s not all done by a human player, you’ll lose that essential realism.

What you’ve said just now is rather profound.

I really thought that it’s best not to tamper with the movies in any way.

So it must have been particularly tough right at the end. This is something that Miyamoto-san also spoke to me about. He'd have to say things like: "We shouldn't have done this at this stage, but because we have adjusted that feature, we're going to have to redo the Super Guide and the Hint Movies!" He told me all this over lunch, in fact! (laughs)

So even when you were making the most minor modification, people would be breaking out in a cold sweat.

Is there anything else you’d like to say to our readers?

Umm… Not really, no.

Wait! I’ve thought of something! It’s a particular way that I’d like people to play the game…

There’s a tendency among players that once they’ve completed a level, they lose any interest in playing through it again. But I’d really like people to play levels again and again. If they do that, they’ll be sure to notice that they’re steadily improving. There are certainly going to be people who say that it's a bit difficult, but I’m approaching fifty and I can get right to the end, so I think if you play through the levels enough times, you’ll be able to discover a whole new side to Mario. 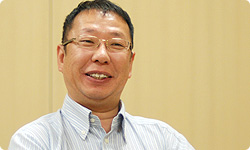 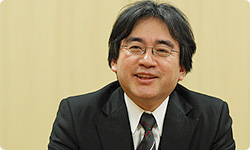 Well, I’m fifty-two and even I can get to the end! (laughs)

In fact, we made this title based on the assumption that players would play through levels over and over. They’ll be able to find new aspects of the game in all sorts of places. For that reason, I really want players to experience everything the game has to offer.

So you’re saying that if you play the same level over and over, you’ll make new discoveries.

I’d like to add something, if I may. A hugely appealing part of the Super Mario Bros. franchise titles are that they can be enjoyed by both the person playing as well as by the people watching. I think of that as a kind of tradition that has been upheld ever since the very first Super Mario Bros. title. Now with this game, anyone who is watching can simply pick up a Wii Remote and join in. That’s why I’d say that you should start off by watching the game. Then, if you think it looks interesting, go ahead and join in. Even if you've never played a Mario game before and you try the single-player mode, while it may be a little tricky at first, there are plenty of features included in the game that will help you to make progress. I think lots of people who never thought they would have anything to do with a Mario game will become absorbed in New Super Mario Bros. Wii and, because of this, both people who had never played Mario before and players who have long enjoyed it will now have a shared interest. In addition, skilled gamers will be able to play alongside players who are not so skilled. That’s my dream.

That is indeed the dream.

Well, it’s really been a long while since we did that.

It was the first time since Super Mario World on the Super Famicom, wasn’t it?

If that’s the case, then it's been twenty years.

It really is about that long, isn’t it?

When we were making the DS title, it was only Tezuka-san and I who got really deeply involved.

So in that sense, you could describe New Super Mario Bros. Wii as being the first straight-ahead evolution in the horizontally-scrolling 2D platform game since Super Mario World, with which it is comparable in terms of the attention to detail and care that went into it.

But I do sometimes wonder if we’ll be making games along these lines far into the future. I get a feeling that we may do, but I don’t know…

(laughs) I feel that 2D Mario titles will definitely be made along these lines. I don't think there's any other way. Even when the three of you are really old... (laughs)

Even when we’re really old? (laughs) I think that once we get a bit older, we won't have the stamina to allow ourselves to be sucked into games like we used to. (laughs)