7. A Block Floating In Mid-Air Is Unnatural

Even if you have a multiplayer mode that lets four people play, there are those players who won’t like it as they don’t want to hold the other players back.

Those are the times when they should

Video: get inside a bubble

Even if you have a multiplayer mode that lets four people play, there are those players who won’t like it as they don’t want to hold the other players back.
get inside a bubble . When you lose a turn in multiplayer mode, you’ll be returned to the level inside a bubble. If you’re then at a tricky bit and, for example, your grandmother says “There’s no way I can do this!” then all she has to do is press the A Button and she’ll be inside a bubble.
Iwata:

That way, you can get the skilled players to escort you right through to the end.

That’s right. Once you’re inside a bubble and floating, you can get carried along without even having to touch the Wii Remote. This means that even people who have never played a Mario game up until now will be able to talk about the final level. They can say things like: "That final boss's third attack was pretty nasty!" (laughs)

(laughs) It feels good to have skilled players and those who are not so skilled all joining in together.

Yes, it’s a good feeling. It helps everyone to bond. Playing a multiplayer game in that kind of congenial atmosphere can be very pleasant, but at the same time, a four-player

Even if you have a multiplayer mode that lets four people play, there are those players who won’t like it as they don’t want to hold the other players back.
Coin Battle can get pretty heated.
Iwata:

What precisely is a Coin Battle?

When it’s only skilled players going head to head, it basically turns into an all-out battle to wipe out the other players.

Well, there are times when nothing beats an all-out battle! (laughs)

It was when I came back from E324 in 2009 that I made the Coin Battle. I thought that an all-out battle should have rules... 24 The Electronic Entertainment Expo 2009 was held in Los Angeles. In addition to New Super Mario Bros. Wii, other new titles including The Legend of Zelda: Spirit Tracks were playable, and many new titles such as Super Mario Galaxy 2 were announced.

What kind of rules do you mean?

For each course, victory should be decided by the number of coins that you’ve collected. With multiplayer modes, I’d say it’s more common than not to have everyone enjoying themselves without things really getting serious…

So it's a bit like: "Well done everybody for trying so hard!”

Right, that’s what it’s like! (laughs) But with the Coin Battle, the competition is more in earnest, with one person being clearly able to say: "I'm number one!" 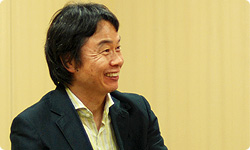 Somehow when you play those games against close friends, you can get really worked up, can’t you?

You can. The player who collects the most coins wins, so you can basically go about it any way you see fit.

So you focus on grabbing as many coins as you can, then if the other players look like they’re about to get some, you do your best to obstruct them.

And even if you play that way, you won’t know the number of coins you’ve each collected until the end. So you might think you’ve really done well this time, but when the final results are announced, everyone will be on tenterhooks.

Do you know, I think I can imagine the rowdy atmosphere in the development room when everyone was playing that! (laughs)

Right. In the Coin Battle arena, there’s also a section which is

Video: a parody of the Mario of old

Even if you have a multiplayer mode that lets four people play, there are those players who won’t like it as they don’t want to hold the other players back.
a parody of the Mario of old , so everyone also got really excited when they played there.
Iwata:

But even allowing for that kind of excitement, I take it that development didn’t go completely without a hitch.

You’re right. This time round there were several directors on the project and inevitably they weren’t all on the same wavelength in terms of their level of understanding of the concept of Mario. That made it necessary for me to go right into the development area and say: “Look, this is how things work in Mario games!” Of course when I say that, it’s not objective—it’s my own take on things. (laughs)

This time round, there were a lot of discussions about judging what was “natural” and “unnatural”, from the perspectives of myself and the rest of the team. For instance, if you shoot a fireball underwater, it's going to travel in a straight line, isn’t it?

That’s one of the rules that were established in the Famicom era. At that time, the underwater and overground sections were separate levels. But this time, there are levels where overground and underwater sections come together in a set. So if a fireball is travelling through the air then continues to travel in the same way through water, it looks somewhat “unnatural”. You wonder: "What precisely is that fire made from?"

It would be fine if fire that was released underwater continued to fly through the air in the same way. But when fire that’s been flying through the air enters the water, it would be “natural” to see it sizzling and giving off foam, wouldn't it?

And if that's not possible then we should make it so that you can't use fire in that area. But looking back over previous titles in the series, the people who made those games believed in the way things worked and didn't question whether or not it was "unnatural". They just thought that doing it that way made it easier to play. From my perspective, when I went to the development area, it really played on my mind that you could still see the consequences of all the lies I had told in the past all over the place.

So it’s only now that you’ve become aware of the lies that you told in the past! (laughs)

That’s why I would have to explain things by saying: “Actually, that was a lie!"

“There were good reasons why I made it that way at the time...” (laughs) 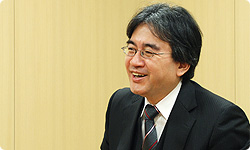 For instance, sometimes there’ll be a single block floating in mid-air, right? When I first made that, I thought it was totally outrageous.

Even though it was you who was making it! (laughs)

Even when I was working on Donkey Kong, I'd design things properly. I’d make sure that if there was a floor here, then there’d be a pillar somewhere to support it. But when it came to Super Mario Bros., we’d have a single block floating in mid-air: “Just what is this supposed to be hanging from?"

That's why when discussion started about making it into a movie25, I got really nervous. I thought: "How are they going to film blocks suspended in mid-air?" When we made the game, it would start off with a large number of blocks and Mario would go along smashing those until there was just a single block floating there. We decided that ending up with just one block floating there didn't seem to feel unnatural, and we made the game with that in mind. 25 Super Mario Bros., a Hollywood adaptation of the video game, was released in 1993. The part of Mario was played by Bob Hoskins.

But why doesn’t it fall? (laughs)

Well, it’s actually connected round the back... (laughs)

In the new title, Penguin Mario throws ice balls which you can use to freeze enemies into blocks of ice underwater. Now these blocks of ice remain fixed in the same position in the water, which I couldn’t help finding strange.

Well, when you freeze something underwater, you'd expect ice to float. Then someone would say: "Isn't it strange that the enemies frozen in mid-air don't drop?" So we made it so that

Video: frozen enemies hang in the air before dropping

Even if you have a multiplayer mode that lets four people play, there are those players who won’t like it as they don’t want to hold the other players back.
frozen enemies hang in the air before dropping . But then you might think that if you shoot a fireball at them, they should melt. So basically the discussion keeps developing like that, and if we took account of every possible angle, it would end up being a fantastically complicated game. What’s called for is judgement of how far we need to go so it feels natural and has rules that are easy to grasp. Now, if I don't do that...
Iwata:

…Then no one else is going to be able to decide! (laughs)

Nothing will get decided! Even the directors are all secretly thinking: “Go ahead and make the decision yourself!” (laughs) 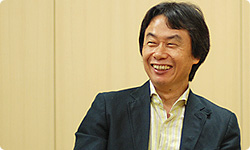 I remember you saying that! (laughs)

To write those, you need the person who first told the lie…

You have to take responsibility for your lies.

So I set things straight so we can make everything “natural”.

So this is the specification document for what's natural in the world of Mario.

I thought that unless I'm involved in every game in the series in the future, I’m not going to be able to tell everybody all of this. But I suppose I’m happy to be able to continue this…

We’re counting on you! (laughs)