In this interview, we’re going to talk about New Super Mario Bros. Wii, but rather than diving straight into a discussion of the new title, I'd like to begin by talking about Mario's roots. There will of course be a lot of readers who know all about this, but I think there are also people who are completely in the dark about how Mario began.

Shall we begin by talking about the period of Mario’s initial conception, when he was known as “Jumpman"?

Sure. Now, this is something I’ve been asked about in hundreds of interviews, so I’ll make it quick! (laughs) In the Pac-Man1 era, there were a number of games that were really popular in the video game arcades. Nintendo had released titles such as Sheriff 2 but none of them quite achieved the level of popularity where you could call them hits. 1 Pac-Man was an arcade game released in 1980 by Namco (now Namco Bandai Games Inc.). A huge hit worldwide, it later appeared on the Nintendo Entertainment System. 2 Sheriff was a shooting game released in 1979 where the hero had to defeat 16 outlaws. It also appeared as a mini-game on WarioWare, Inc.: Minigame Mania for the Game Boy Advance.

That's right. So it was at this point that the President of Nintendo at the time, Yamauchi-san, told us: “Make games that sell more!”

"Make games that sell more!” That’s some task he set you! (laughs)

It was some task indeed! (laughs) So we decided to research what made hit titles so popular. Well, when I say "research", I just mean playing the games! (laughs)

Playing in the name of research! (laughs)

As you can imagine, I was a big fan of games. What’s more, while now there are lots of people at Nintendo who are highly-skilled video game players, at the time I was one of the best. 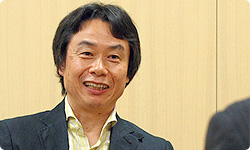 People would gather round to watch when you were playing in the arcade, wouldn't they?

Before I knew it, there'd be a crowd of people around me!

There was even a time when I had people gathered around me, you know!

At the time, dot-eating games3 predominated, Pac-Man being the most well-known… 3 Dot-eating games were games where the player attempted to avoid enemies in a maze while manoeuvring over dots in order to increase their score.

Yes, in arcades at the time you’d find a number of different types of games based around eating dots.

Right. At the same time, you were also seeing the emergence of side-scrolling games where your character would run along. As I was originally an industrial designer, I would analyse those games while I played them, trying to figure out what it was about the way the games were put together that made them enjoyable and made people want to play them again.

So you wanted to know what it was that made players insert another 100 yen coin once the game was over and have another go.

Right. And basically, I concluded that this was born of the players being mad at themselves. So I would try to analyse how the game made players feel that way. It was when I was mulling over these issues that a more senior colleague, Gunpei Yokoi4, was good enough to explain a lot of things to me. I don’t want to get bogged down in too much detail about the intricacies of game design, so I'll skip over this. Anyway, up until that point, I had been working as a graphic and packaging designer for games developed by other people... 4 Gunpei Yokoi (1941-1997) worked at Nintendo, chiefly as a developer for products such as Game & Watch and the Game Boy handheld system, as well as the NES robot or Robotic Operating Buddy (R.O.B.) and Dr. Mario.

I was involved in making games for arcades, but the kind of ideas I was suggesting weren't really getting picked up on... But then I was lucky enough to be entrusted with the entire development of a software title...

So that was the big turning point in your development as a game designer?

Right. And it was then that, having rigorously analysed what exactly made people want to play one more time, I sketched out ideas for five games. At this point, Nintendo was the licensee for Popeye5. 5 Popeye is a popular American cartoon character. Other memorable characters who appear alongside the hero include Olive Oyl and Bluto.

That’s why at first I was asked if I could make a game using Popeye. The basic concept of Popeye is that there is the hero and his rival who he manages to turn the tables on with the aid of spinach.

When you put it like that, it’s the same as Pac-Man, isn't it? (laughs)

Yes, it’s identical to Pac-Man! (laughs) So I sketched out a few ideas for games using Popeye. At that point, Yokoi-san was good enough to bring these ideas to the President’s attention and in the end one of the ideas received official approval. Yokoi-san thought that designers would become necessary members of development teams in order to make games in the future. And that's how

In this interview, we’re going to talk about New Super Mario Bros. Wii, but rather than diving straight into a discussion of the new title, I'd like to begin by talking about Mario's roots.
Donkey Kong 6 came about. 6 Donkey Kong was the debut release from game designer Shigeru Miyamoto. It appeared in arcades in 1981 and was released for the Nintendo Entertainment System in 1983.
Iwata:

But originally it was going to be a Popeye game. 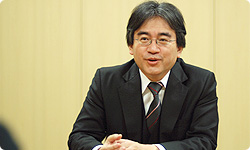 That’s right. But while I can't recall exactly why it was, we were unable to use Popeye in that title. It really felt like the ladder had been pulled out from under us, so to speak.

So even though you were making a game about climbing ladders, you had the ladder pulled out from beneath you before you even got started! (laughs)

Great gag! You deserve a standing ovation for that one! (laughs) Anyway, at the time we were at a loss as to how to proceed. Then we thought: “Why not come up with our own original character?"

So basically Donkey Kong and Mario came about once the ladder had been pulled out from beneath you.

Miyamoto-san, you really do lead a charmed life!

It was a really lucky break! So next we began to flesh out the idea for a game based on the concept we had come up with. Now, a fun game should always be easy to understand - you should be able to take one look at it and know what you have to do straight away. It should be so well constructed that you can tell at a glance what your goal is and, even if you don’t succeed, you’ll blame yourself rather than the game. Moreover, the people standing around watching the game have also got to be able to enjoy it. These were the kind of issues I discussed with Yokoi-san.

So you were analysing what made games fun to play.

Yes, we were. Let's say, for example, that there's one action in the game that the player can perform easily. Then let's add another simple action. These actions may be simple in themselves, but when the player is required to do them both at the same time, it becomes a whole lot more tricky.

So while those two actions might be easy to pull off on their own, when you try to do them simultaneously, it gets more difficult. And it's precisely because you think it should be easy to do that you get mad at yourself when you don't quite manage it, right?

Precisely. So let’s say we make a number of uneven, overlapping slopes…

Where you have to climb ladders and jump and so on.

So you’re aiming to get safely to the goal using short cuts while constantly trying to predict the route that the barrels rolling towards you are going to take. It’s easy to climb higher and higher. It’s also easy to avoid the rolling barrels. But it’s when you try to do those two things at the same time that it becomes challenging. What's more, you're also thinking about how to take the shortest possible route, so it gets even more difficult. We thought that we could work with that concept. It was at that point when we tried to make the screen scroll and were told: “That board doesn’t scroll!” (laughs) 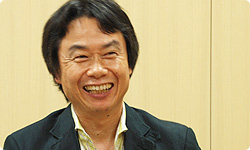 The "board" that you just mentioned is the circuit board inside the arcade game cabinet. At that time, there was a fair amount of individuality, shall we say, in each machine and, depending on the specific type of hardware, there were different limitations imposed. When you began work on Donkey Kong, the cabinet which you were supposed to use included a board which wouldn't allow games to scroll.

As we wanted the game to be played on at least four connected screens, we simply referred to that as “scrolling”. (laughs)

So the fact that Donkey Kong is played over four screens stems from your original desire to make it scroll?

Yes, that’s right. The technical supervisor at the time asked us what on earth we were thinking: "One screen is plenty for a regular game! But you're making four separate screens! You might as well ask us to make four different games!”

But you were dead set on doing it that way.

Yes, I was. I also recall that the cabinet we were making the game for had one joystick and one button, but initially I intended it to be controlled using only the joystick.

So what you’re saying is that if that cabinet hadn’t happened to have a button, Mario wouldn’t have jumped? You can’t imagine Mario now without thinking of him jumping! (laughs)

Well, that might have been the case. Originally it was a game where you had to escape from a maze. To have allowed players to jump and avoid dangers would have spoiled the strategic element of the game. But then we thought: “If you had a barrel rolling towards you, what would you do?”

Naturally, you’d jump over it! (laughs)

Of course you’d jump over it! (laughs) So we decided to use the button to allow players to jump and when we made a prototype to try it out, it worked really well. I think that if we hadn't allowed Mario to jump, it would have most likely proved to be a horrendously difficult game to play.

You’d have had to focus on avoiding the barrels while climbing up through the maze. That would have required a huge amount of grit and determination.

Also, if we’d made it so you’d been able to jump by pressing up on the joystick, the name “jump button” would never have come about! On the 2nd stage, we had vertical lifts and we were concerned as to how the player would be able to get on them. But if Mario jumped...

Then getting on and off them would be a breeze! (laughs)

It was then that we decided to go with jumping, which worked out for the best.

By allowing Mario to jump, you were able to solve multiple issues at the same time*.

* To read more about "solving multiple issues at the same time", see this discussion with President Iwata.

We were also able to make use of that spare button! (laughs) So that’s the story of how Mario became able to jump.