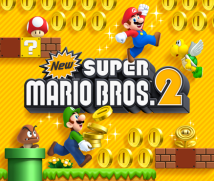 5. Team Up to Strike it Rich

This time, two people can play the main stages together. How did that come about?

I sound so selfish! (laughs)

It didn’t look promising. We had no idea how to make it work, and it would be hard on the designers.

Yeah. For two-player cooperative play, Luigi comes in, so we would have to double every transformation.

Which would likely lead to a longer development time.

Yeah. I told Tezuka-san repeatedly that we couldn’t do it in the given timeframe.

Tezuka-san, why did you set your sights on two-player co-op?

It isn’t a very clear reason, but playing it that way was fun. 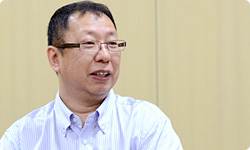 You actually got to play a two-player version?

Yes. There was one made as an experiment, and playing it was just great. Technologically, it wasn’t impossible. It looked like we could do it if we worked at it. I kept saying, “If we’re gonna do this, let’s go all out!”

But I suppose Amano-san and Ishikawa-san were thinking, “Running an experiment and actually perfecting a product are totally different things!”

Were those special stages for two-player co-op?

No. With the previous game, New Super Mario Bros.12 for the Nintendo DS system, they were special stages, but with the Wii game, you could play all the stages of the main game, and we wanted to do the same thing on Nintendo 3DS as on Wii. We decided that if we couldn’t do that, then we would abandon it. 12 New Super Mario Bros.: An action game released for the Nintendo DS system in May 2006 in Japan.

That would have an effect on all the main stages made up to that point.

I can see why you said, “I don’t want to do it!” (laughs) What hurdles did you have to cross in achieving two-person gameplay?

In the Wii game, both Mario and Luigi were together on the same screen, and the screen scrolls sideways as if keeping up with the leader.

But for the main stages of this game for Nintendo 3DS, you don’t just go to the right. There are a lot of convoluted stages.

So you can’t simply have the screen scroll to the right.

Right. And compared to the Wii version, the area that the screen can show is much smaller.

For Wii, we pulled back the camera to show a broader range on the screen.

Yes. We broadened the screen so everyone could easily play, but we couldn’t do that with Nintendo 3DS.

Under those tough circumstances, what made a breakthrough?

We have the game decide whether Mario or Luigi is the current leader, and the camera follows the leader. 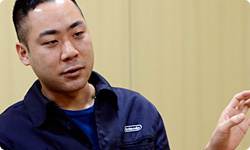 That way the camera can keep up even on meandering stages.

Yes. If the trailing player is too slow, he disappears from the screen and goes into a bubble.

Video: Competing to be the leader

This time, two people can play the main stages together. How did that come about?
Competing to be the leader is fun.
Amano:

So you can compete to become leader, get in your opponent’s way, or be mischievous with each other. On the other hand, you can enjoy purely co-operative play, such as a good player becoming leader and helping out someone who isn’t so good.

Right. And someone who isn’t that great may look at someone who is better and make discoveries, like, “Oh, so that’s how you do it!”

It can be useful to study by watching a skilled person play.

And this time, an impossible amount of coins appear, so if a single player can’t get certain coins, two players playing co-operatively can get them all.

What’s more, we made it so that when two people play, you can get twice the number of coins, so I think people will want to play with a partner.

At first, you didn’t want to make it for two players, but once you had, how did it feel?

At first, you said you couldn’t do it, but you did! (laughs)

Yeah, I guess we did! (laughs)

For the Wii version, everyone could look at the same television screen and go at it, but this time, even though you play in different spots, when one person laughs, the other one does, too.

You might shout, “Oh, no! The leader changed!” (laughs) I truly am glad we made it. If I had known it would turn out like this, when Tezuka-san said he wanted to make a two-player game, I would have said, “Let’s do it!”

I’m incredibly grateful to Tezuka-san for first suggesting it.

No, I was just being selfish! (laughs) 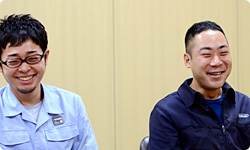