You’ve already told me a lot about this project, but were there any other difficult or trying times that anyone would like to talk about?

Personally, there wasn’t anything that I thought was particularly trying. Though as I mentioned before, there was the issue regarding the disc capacity, and trying to make the game seamless was a constant barrier for us.

Development is always a ‘battle against the barriers’, isn’t it?

That’s right. On this project we were trying some especially experimental stuff as well, so we had high hurdles from the very start, and went through some difficult times. We were able to solve all problems, though, so now I don’t remember any of the difficult or trying thoughts at all. Of course, being able to overcome barriers like that was the result of the hard work of the people here and tens of other staff members. The feeling of happiness we got from clearing the barriers always overcame any feelings of exertion or negativity, and we were always able to shout ‘Next!’ and move on.

Yes, I think it was a very healthy project all round. When developing games, I think it’s often the case that, right at the end, there are parts of the game you eventually have to give up on. I think there are times when developers say ‘let’s give up on that gameplay element’, or ‘let’s forget about that mode for now and use it next time’. As far as I know, though, I don’t think there were any cases like that this time...

You mean you don’t feel you left anything undone?

No, I don’t. In fact I’d say that right at the end of this project, instead of abandoning things, there was an increasing number of additions to the game. Because we added a range of things, and were able to fit everything onto one dual-layer Wii disc, the feeling of ‘it’s complete’ was really strong. That’s why I barely remember any troublesome times.

Well... Yes, I feel the same. Even the really long meetings that we had didn’t feel like especially tough going. In that sense it was a really easy project to do. Because presenting Samus’s emotions was very important for this project, we especially didn’t want anything to get lost in the localisation process, so Saito-san and his team did things like visit America three times...

Ah, sorry, four times. (laughs) Things like that probably provided us with some troublesome moments, but overall this was a project without any particularly trying times, and one I enjoyed working on more than any other in the past.

I think the reason we were able to enjoy working on this project was that everyone, starting with Sakamoto-san and including Kitaura-san the director and Hayashi-san, were ‘gifted praisers’. They’d make someone work terribly hard, but then they’d gently praise them for it. This praise meant people would soon forget how hard they’d worked.

Ah yes, that is probably an important quality to have. Especially when trying to guide an enormous project to its goal.

Normally when the development period for big projects is further extended, as this one was, the staff often become rather burned out. Of course, you must all be mentally and physically tired, but talking to you today I haven’t seen anyone who looks totally burned out. In that sense as well, therefore, I suppose this was a very healthy project. All right then, I’d like to finish by asking you all individually if there’s something you want to promote or draw attention to. Let’s start with you, Hosokawa-san.

Because the player can easily do what they want to do, and furthermore because it can be controlled with just a few buttons, I think this is an action game that can be enjoyed by a very wide range of people. It also has a story that the player can immerse themselves in, and I think it’s a pretty non-stop game until the very end, so I really want people to enjoy it. 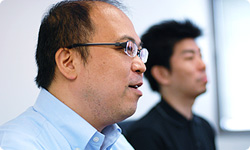 From a design point of view, I think that this is an immersive game, and one that doesn’t, from the opening screen to the very end, contain a single ‘isn’t this a bit weird?’ moment of strangeness. I think that even the nooks and crannies of what the player can see on their TV screen have been created in a way that will be satisfying for the player, so I’d like them to explore freely to their hearts’ content. 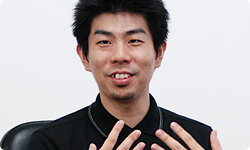 Otsuka-san mentioned this earlier as well, but this game’s parts really are disconcertingly well-connected. It’s therefore a game where the player can become one with Samus, and, while experiencing her emotions, can play right into the depths of the story. I want as many people as possible to enjoy this. 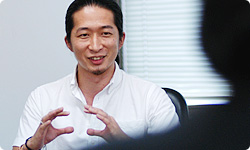 The connection between the game parts and the cinematic parts you made feels seamless. In fact, your impression was that you had never experienced such a level of connection before, wasn’t it?

That’s right. This really isn’t a sales pitch or anything, but we’ve made a game where players can feel ‘this is really connected’ and ‘I can really become Samus’, and that’s what I want people to experience.

For me, giving the characters that appear in the story a ‘sense of life’ is not just a matter of having them be there, saying their lines. I want players to get a taste of what each character is thinking, as they stand there, as a girl called Samus appears, as their relationships develop and so on. The story contains things from the past, and people who know the events of the past also appear. I think we’ve really been able to express the changes in those people’s emotions in this game.We at Team NINJA have created several games before, but this time I think we’ve climbed to new heights that we did not reach with those titles. That’s why I want people to enjoy playing this game as a game, of course, and when they are connected to the story, I want them to clearly feel the emotions of the people who appear in the game. 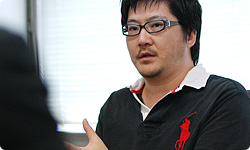 This is a new title, not from a previous Team NINJA series, so I think it was developed with a freedom of ideas. Furthermore, on this long project, we were able to indulge our obsessions to our hearts’ content. I think therefore that when a player actually plays this game, they’ll be able to feel that it’s well made right down to the details. The player doesn’t have to go out specifically to find these details, however. I think they’ll be able to get the same feeling naturally by playing the game, so I really want people to enjoy the convincing Metroid world that we’ve created. 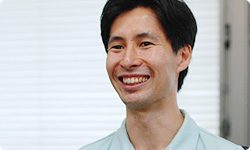 You really can play with just one Wii Remote. Also, and this might sound rather rude, but we tried to make a game even an old man of fifty like Sakamoto-san can comfortably control. (laughs) This is something that the development side also contributed ideas for. Anybody will therefore be able to control the game immediately, without feeling strange, so I really want people to enjoy it. One more thing: In order to increase the satisfaction of exploring, items have been frantically hidden in various places by members of Team NINJA and Nintendo. I’d be very happy if players engaged with us in a battle of wits and tried to find these items.

It’s like a challenge from the game makers to the players, then?

The songs and sound effects for this game are inserted using unique outputs and ways of making sounds. Explaining them now would be giving away a few spoilers, so I won’t talk about it. In order to really feel these things, I’d like players to immerse themselves deeply in the game. By wearing headphones, players will experience all the really surprising and moving parts. I’d also like them to explore the whole game. They’ll be able to hear all sorts of music that way. 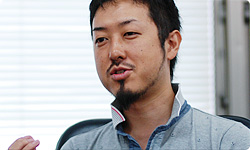 Yes, they are. Sound effects have been embedded into certain places, so I think it’d be nice if players went and visited them.

Well, thank you very much for your time, everybody. Though you all had to gather here early today, I think that talking to all of you has been really worthwhile. I also came to understand what a healthy project this really was. 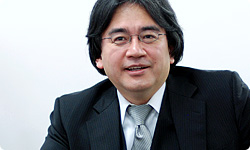 It really was healthy. Even when we the developers would fail in some way, Sakamoto-san and others would come straight to Tokyo to see us, and whenever we hit a wall, I felt that we all got over it together. This project lasted a really long time, but looking back on it now, every day was really enjoyable, and it feels like the time just flew by.

Do you miss Sakamoto-san now that he’s returned to Kyoto?

Yes, I really miss him. To the extent that, if it were possible, I’d want this project to continue ... (laughs)