Kitaura-san, the first step for you was reading the scenario that Sakamoto-san had written, wasn’t it?

Yes, that’s right. Before meeting Sakamoto-san, I read the scenario and prepared some storyboards. Since this was going to be a long-term project, I felt that it was important for us to have an affinity for each other. In fact, I was prepared to resign from the project if Sakamoto-san didn’t seem to like my storyboards when he saw them.

You had that much faith in your storyboards?

I did. That really was my intention. When Sakamoto-san saw the storyboards, however, the room fell completely silent.

There was no reaction at all?

No. Sakamoto-san was completely silent, so I thought there was no hope for me. I thought I should just go home there and then.

That wasn’t it at all! (laughs) The truth is that I was so inspired I couldn’t put it into words. I think anyone would become speechless if they were presented with storyboards that were so far beyond their wildest dreams!

So the storyboards were so much better than you expected that they had you lost for words, Sakamoto-san?

That’s right. Kitaura-san’s passion was really apparent in those storyboards. That’s why I decided to ask him to be responsible for all production, not just for the movies, but doing production for gameplay parts too. The game’s actual

Kitaura-san, the first step for you was reading the scenario that Sakamoto-san had written, wasn’t it?
opening movie , incidentally, is exactly the way it was on those original storyboards.
Iwata:

So you got really earnestly involved with the production of the storyboard images, Kitaura-san?

I did, yes. I think I drew more than 300 storyboards in total. The image count was over 2,000. By this stage, I was also accounting for camera work and action, so they became really elaborate production storyboards. I think I took over six months to finish them. 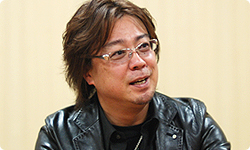 That’s a little bit like the scale of a feature film or novel, isn’t it?

There was nothing ‘little’ about this scale! (laughs) Furthermore, because it was important to make the action parts and the movie parts seamless, I couldn’t just go ahead and work on the movies by myself. I’d be shown the game during development, and if Samus’s movement was faster in-game, for example, I had to adjust the movies to match the game. Also, let’s say we made Samus’s appearance in the CG movies too shiny. Then Sakamoto-san would say things like ‘She looks like a sports car...’

I suppose that meant she was too shiny! (laughs)

As a result, we had to deliberately add dirt and adjust the atmosphere surrounding Samus to make her blend in better. What’s more, the scenario that Sakamoto-san wrote was full of Samus’s thoughts and feelings.

This time I wanted to create an intriguing depiction of Samus’s humanity, showing that she’s not just cool, but also kind and sympathetic, and perhaps a little immature in her passion and earnestness.

...which is easily said, but such psychological aspects are the most difficult things to depict when rendering people in CG. That’s why I told my staff to carefully observe actresses’ eyes when they watched movies.

When you say ‘observe actresses’ eyes’, what do you mean exactly?

I think the movement of the eyeballs is extremely important when it comes to expressing emotions. I think you’ll notice when you watch our finished movies that characters’

Video: eyeballs do not remain still, but move around

Kitaura-san, the first step for you was reading the scenario that Sakamoto-san had written, wasn’t it?
eyeballs do not remain still, but move around .
Iwata:

Do you always go to such lengths when creating CG, Kitaura-san?

No, this is the first time I’ve taken things this far. What’s more, when portraying a character’s thoughts and feelings, every single minute detail of their expression becomes very important. So for this project we included more joint-like ‘rigs’ in Samus’s face than usual, and really focused on establishing the movement of the muscles connected to them. As a result, we were able to render Samus’s expressions in a more lifelike fashion. For the creation of the CG, I made about 10 teams and requested each team to do a different scene. I’d praise the team that had created the best movie, telling them ‘You’ve done the best work’. I’d then show their work to the other teams and tell them ‘This is the minimum standard’.

I see! (laughs) So in order to raise the overall standard, you had the 10 teams compete against each other. 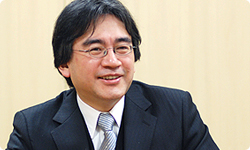 That’s right. The teams had always been capable of producing excellent work, but they really tried hard to create high-quality movies in order to compete with each other.

You went to the motion capture studio as well, didn’t you, Sakamoto-san?

I did, yes. I was able to see the CG production process in the flesh, as it were, and I really learned a lot from going to the studio and watching Kitaura-san directing the actors while shooting the movies, for example. I also thought the cameraman was especially skilful.

He certainly was. Motion capture is primarily a method of recording movement data. This time, apart from the 52 fixed capture cameras, we also had a professional cameraman record the scenes, in order to record the movies as they appeared on the storyboards6. However, since these were temporary movies, we were asking him to shoot things like Samus in tights, or polystyrene creatures, and there was no set to speak of. These are the kinds of things that you usually hate asking professional cameramen to shoot. 6 Movies as they appeared on the storyboards: In order to accurately reproduce the Metroid: Other M drama as it appeared on the storyboard, a video storyboard was first created using scenes shot by a cameraman, and a method of reproducing these scenes in CG was used.

Because the scenes that they shoot aren’t used as they are?

Exactly. It’s never easy to ask a top-level cameraman to shoot scenes that are later going to be processed as CG. This time, however, an acquaintance of mine came to me saying ‘That sounds interesting – can I do it?’

As you can imagine, we needed someone with a sense of angles and camerawork for the battle scenes, so we were really lucky that he could do it for us.

He stood close to me, checking the monitors. When we’d shoot a particularly moving scene, I’d ask him ‘How was that, Sakamoto-san?’, but he’d be completely silent - again.

Just like when he saw the storyboards for the first time?

Yes! (laughs) I was really worried, thinking ‘Oh no, he doesn’t like it...’, but then when I peeked at his face, his eyes were full of tears.

Well, the movie did show Samus in tights. (laughs)

Yeah... But weren’t you crying as well, Kitaura-san?