Is it correct that until this project, Team NINJA had always made their own games internally?

That’s right. We sometimes cooperated with external experts in movies like Kitaura-san, but we basically made our games within the team.

Considering that you’d always done things by yourselves, therefore, didn’t you feel constrained on this project - working with Nintendo, and not being allowed to freely make your own decisions?

Not at all. We could discuss anything we wanted with Sakamoto-san while making the game, so we didn’t feel ‘constrained’ at all. Of course, there were times when we received instructions such as ‘it would be better this way’ about things that we’d made, but rather than feeling constrained, the impression we got from this was that we’d gained a really powerful partner that could help us improve on the things we’d been making by ourselves.

Does that mean that your personal definition of ‘Nintendo-esque’ changed, Hayashi-san?

This may sound a little bit impertinent, but I thought ‘we make games just the same way as Nintendo’.

Ah, I thought you’d say that. Actually, after speaking to Sakamoto-san about this, I got the feeling that your approach to making things had a lot in common. These things can’t be seen from the outside, but you soon realise them for the first time once you start working together.

That’s right. We originally produced games internally, so we have values that developed during this process. When Sakamoto-san told us about the concept of this Metroid, however, and after we’d discussed a few things with him, we got the impression that his values weren’t any different to our own. Team NINJA’s stance is: ‘Let’s try making it first’. In this project too, when it came to deciding how Samus would move, for example, we said ‘How about we show her running first, then we’ll think about it’, and Sakamoto-san replied ‘Let’s do that, I’d love to see her run’. For us, creating moving objects first and then actually getting your hands on them in order to decide their pros and cons is the easiest way of doing things. 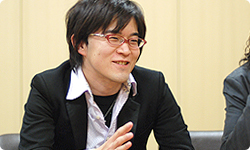 Is that how you’ve always done things at Team NINJA?

That’s right. It’s probably not good form for developers, but we’ve never really prepared anything that could be called detailed specifications beforehand.

Actually, drawing up detailed specifications before development starts is not necessarily the main way of doing things even for internal Nintendo projects. Personally, I don’t think you can say that specifications are necessarily a good thing or a bad thing. I think the appropriate approach varies depending on the composition of the development team and the game they are making. As opposed to the method of having a complete vision in mind from the beginning and creating the game according to those specifications, there are lots of things in game-making that you have to try creating, or try getting a feel of, before you understand them. Nintendo have been making games in this way, which is why I know that detailed specifications aren’t always the best approach.

We’re the same in that respect. Even if you create a solid set of specifications, during development your focus gradually shifts as you’re working on the game, and eventually the specifications become meaningless. As a result there are a lot of projects that end up almost as a different game to the one detailed in the specifications.

All right. What things were you conscious of during the making of Metroid: Other M?

We’re trying things with Samus’s movement in this Metroid game that haven’t been attempted before, and at first we were getting a lot of directions along the lines of ‘that’s not the way Samus looks’. Making Samus look good when she moved, though, is exactly the kind of thing we excel at, so we were able to really go for it and polish it up.

That was one part of the game on which Team NINJA couldn’t be budged, wasn’t it?

That’s right. Another thing I became really conscious of was the control aspect. In the action games we’d made previously, almost every button on the controller was used to make our human characters perform all these different actions. As a result, we felt that perhaps we were putting some players off. When Sakamoto-san told us about his ‘one Wii Remote only’ idea, therefore, we could see that this was a real chance for us.

That idea became the ‘NES game using the latest technology’ concept that you mentioned earlier, didn’t it?

Yes, we thought that if we could make a game that could be controlled with just one Wii Remote, we’d enable players who were put off by complex controls to enjoy 3D action games as well.

Why were you so focused on this idea of ‘just one Wii Remote’, Sakamoto-san?

Metroid5 was originally a game for the Family Computer Disk System, and so could be played using just the +Control Pad and two buttons. Back then the game had simple controls:

Video: Move with the +Control Pad and use the two buttons to jump and shoot

Is it correct that until this project, Team NINJA had always made their own games internally?
Move with the +Control Pad and use the two buttons to jump and shoot . That’s why I decided this time to make a game that just used one Wii Remote and didn’t use the Nunchuk. Even in a Metroid world that ended up being constructed in 3D, the player feels more affinity with Samus when controlling her with the +Control Pad, even more so than with the Control Stick. 5 The first game in the Metroid series was an action game released for the Family Computer Disk System in August 1986 in Japan. The Family Computer Disk system was an attachment to the Japanese NES system, and ‘The Legend of Zelda’ was one of the launch Disk Card games for the system in 1985. In Europe, the first game in the Metroid series was released for the Nintendo Entertainment System in January 1988. 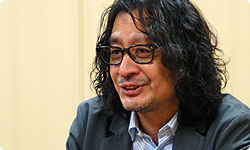 In other words, the Nunchuk was unsuitable for creating a ‘NES game with the latest technology’?

Yes. One Wii Remote doesn’t really have enough buttons, though. There were times when some problems, such as trying to implement special actions, could potentially have been solved by connecting the Nunchuk. Even then though, we had an understanding that we would never ‘resort to the Nunchuk’.

What I was conscious of, therefore, was ‘automation’. Instead of forcing the player to use complex button controls, we’d enable them to accomplish many things using just the Wii Remote by ‘automating’ various actions in the game.

For example, using the +Control Pad to move means that players are limited to vertical, horizontal and diagonal movement – eight directions. However, by

Video: automatically changing the camera angle on the game side

Is it correct that until this project, Team NINJA had always made their own games internally?
automatically changing the camera angle on the game side , we can stop the player from feeling restricted in this way, and can allow them to enjoy being immersed in a 3D world that’s not limited to two axes.
Sakamoto:

Along with ‘automation’, we also made ‘reaction’ one of the themes this time. Many features came about from this.

What kind of features came about from making ‘reaction’ a theme?

The Sensemove, for example. When players are attacked by an enemy, they naturally try to evade the attack. Jumping and moving normally away from attacks, however, does not make for especially beautiful evasive manoeuvres.

Since we couldn’t use another button, we decided to try using the +Control Pad. Under ordinary circumstances, the +Control Pad is used to move, but when the player is attacked by an enemy, or when a projectile approaches them, ordinary movement is replaced with a Sensemove, allowing the player to

Is it correct that until this project, Team NINJA had always made their own games internally?
evade enemy attacks at the last minute .

It actually looks really cool. The player will get the impression that they’re playing really well! (laughs)

I’ve actually tried it myself and I got that impression! (laughs)

Evading attacks in such a cool way feels really good. Another big theme in the Metroid series is ‘exploration’.

Video: exploring every nook and cranny

Is it correct that until this project, Team NINJA had always made their own games internally?
exploring every nook and cranny , players can discover various items and so on, can’t they?
Sakamoto:

They can indeed. Since the Wii Remote can be used as a ‘pointer’, we decided to use this feature for exploration.

Video: Point the Wii Remote at the screen, and the viewpoint changes automatically

Is it correct that until this project, Team NINJA had always made their own games internally?
Point the Wii Remote at the screen, and the viewpoint changes automatically . We call this the ‘Search view’. We make use of 3D space for this, enabling players to fully enjoy Metroid’s characteristic exploration aspect.
Hayashi:

It’s simple to progress without paying attention to them, but actually the objects surrounding the player contain

Video: all sorts of hidden information

Is it correct that until this project, Team NINJA had always made their own games internally?
all sorts of hidden information . I think this game is absolutely chock-full of places that the player might pass by without noticing at first, but then go back, thinking ‘actually...’. I also think that such places will make experienced Metroid players think ‘Ah, this right here is Metroid gameplay.’
Sakamoto:

‘It looks like I can go over there’, or ‘this place looks suspicious’, or ‘what if I set a Bomb here, or a Super Missile there?’ – the sense of finding clues like these and trying out various things is what Metroid is all about.

Hayashi-san, was implementing the ‘just one Wii Remote’ control system a challenge like none other you’d had before?

Yes, I think so. I think that if the buttons are available from the start, you’ll inevitably end up using all of them. This time however, we were bound by our ‘no resort to the Nunchuk’ concept from the very beginning. Though there was a lot of trial and error, I think the result is that we’ve created a game that will be enjoyed not only by fans, but also by those who had previously been reluctant to play 3D action games. I think they’ll get the feeling that ‘even without all those buttons, you can still play this kind of game’.