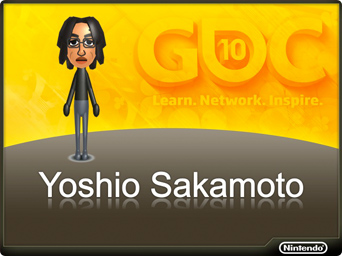 I’m so grateful to have so many of you attend my presentation today.I’ve done my best to make sure that this session will be productive for those of you here.

I thank you for your time.

I’ve been a part of this industry for a pretty long time and I’ve been involved in the development of a good number of titles. While I’m categorised as a veteran, this is the first opportunity I’ve had to speak in a forum like this, and I suspect that those of you gathered here might not know much about me.

That is because it wouldn’t be an overstatement to say that METROID is the only series I'm known for outside of Japan. 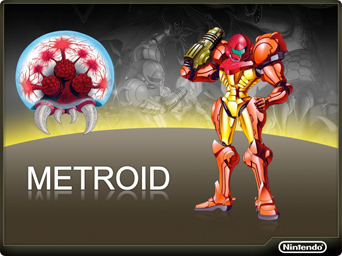 I was virtually uninvolved in the development of the games in the PRIME series1, so there was very little opportunity for those of you here to get to know who I am. Also…

Many of the other games I’ve worked on have been more unique, subtler or quirkier.

And because of that…

They don’t make it out of Japan as much. Please don’t interpret this as meaning the games are boring…

In Japan, METROID games are known as niche titles as well, so over there, I might be considered “a guy who only makes niche games.” In other words, rather than making games with global appeal, my true identity might be as a game designer with a "strong tendency towards niche games."I think this might upset the company but I actually really like being in the position that I'm in.

Well then, today I will be speaking to you about “what Mr. Iwata finds puzzling about my game-making style.” To explain what Mr. Iwata’s curiosity is, I’ll first need to introduce some of the titles on which I’ve worked. I hope it will serve as a good introduction for those who may not be too familiar with my work. Firstly, then, I’d like to start with an introduction to the METROID series.

This is “METROID: Other M”, a title for the Wii console. For the majority of the other games in this series, I was the director, but for this latest instalment, “METROID: Other M,” I’m the producer. 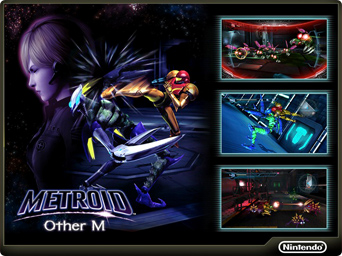 This new Metroid title is launching in the U.S. on June 27th.

*After this presentation was made, the release date was changed to 31 August 2010 in the U.S.

We’re diligently working on making this epic title the ultimate Metroid game, having brought together the best game designers, CG, visual experts, sound designers, and music professionals active in the Japanese gaming industry today. This game has been in development for a while and was first introduced to the public at E3 2009.

Hello. It’s nice to meet you. I’m Yoshio Sakamoto with Nintendo. I’m so grateful to have so many of you attend my presentation today.I’ve done my best to make sure that this session will be productive for those of you here.
PLAY: METROID: Other M MOVIE

I’d now like to give a brief introduction to each of the titles that I’ve been involved with in the Metroid series. 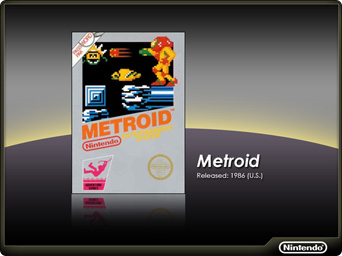 Samus’s adventures started in “METROID” for the NES2. I’m credited as a Designer on this game. This was still the dawn of video games and I hadn’t accumulated the experience or know-how on a project, so as a team we developed the game through trial and error. It wasn’t a case of me creating the METROID franchise by myself. When people credit me for being “the one who gave birth to Metroid,” I feel a bit of resistance. If anything, maybe I consider myself After all, the one who gave birth to Metroid is the Queen Metroid, right? (laughs)

2 NES is an acronym for the Nintendo Entertainment System.

When you say Queen Metroid, people think “METROID II: Return of Samus”3 for the Game Boy. Actually, I wasn’t involved in this title. I was, however, inspired by the scene where the Baby Metroid born in front of Samus’s eyes thinks she is her mother, and this led to the creation of “Super Metroid”4 for the SNES5. And that is where the “Other M” story picks up... If “METROID II: Return of Samus” had never been created, what followed would most likely have taken a different path. And maybe more importantly, I wouldn’t be standing here today.

3 METROID II: Return of Samus is an action game released for the Game Boy in January 1992 in Japan.

4 Super METROID was an action game released for the SNES in March 1994 in Japan. It is the third title in the series.

5 SNES is an acronym for the Super Nintendo Entertainment System. 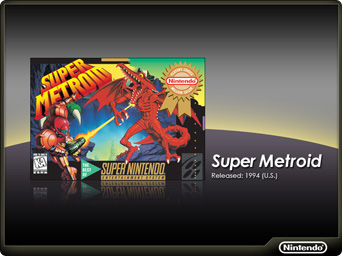 I was the director on “SUPER METROID” for the SNES. I wanted to add an element of drama to this action game and, near the end of the game, the decision was made to temporarily take control away from the player in order to insert a rendered scene. In doing this, my team was challenged to do something that was quite unusual for the time.

Hello. It’s nice to meet you. I’m Yoshio Sakamoto with Nintendo. I’m so grateful to have so many of you attend my presentation today.I’ve done my best to make sure that this session will be productive for those of you here.
PLAY: SUPER METROID MOVIE

And with METROID Fusion6 for the Game Boy Advance, I took the story and drama elements even further, moving on from the method used for “SUPER METROID”, which valued “silent storytelling”, and venturing into “story development through words”. Some of you might already be aware that the game we’re currently working on, “METROID: Other M,” fits chronologically between the SUPER METROID and METROID Fusion stories.

6 METROID Fusion was an action game released for the Game Boy Advance in February 2003 in Japan. It is the fourth title in the series. 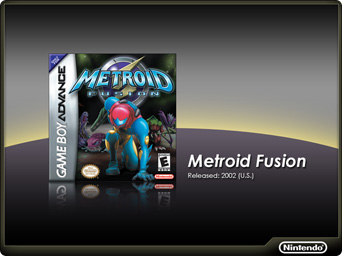 The next game, METROID: Zero Mission7 for the Game Boy Advance, was a remake of the NES game. However, we added a scenario which wasn’t there in the original, strengthening the storytelling element. This is the title in which Zero Suit Samus made her debut. I was the director on both Game Boy Advance titles.

7 METROID: Zero Mission was an action game for the Game Boy Advance released in May 2004 in Japan. It is the fifth title in the series. 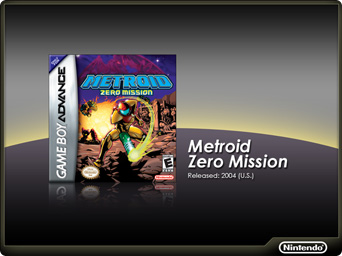