4. Games in the Sakaguchi household

The second half of development seemed to be quite enjoyable, Sakamoto-san, but at the start of the development process you were writhing in agony trying to create the story, weren’t you? (laughs)

Yes! (laughs) It was an uphill struggle, considerably so.

I watched the whole process of you agonising, being unable to arrange the story neatly in your own mind.

When it comes to writing stories, when you’re able to write you can just write effortlessly, but when you’re unable to write, you really can’t write a word. I think the fact that I’m not a professional fiction writer is also a factor in this. For this project, I really couldn’t write anything at all. I’d have all the material ready, but then I’d start getting doubts like ‘are these two parts properly connected?’ or ‘isn’t this a bit strange?’, and I’d feel like I’d failed on every count...

Oh yes, that’s definitely a feeling I can understand.

This might be overstating it slightly, but at one time I felt I’d gone a bit neurotic.

While I think that is indeed an overstatement, it was clear that you were rather troubled. (laughs)

Everything I’d written started to look false, or like a mistake. 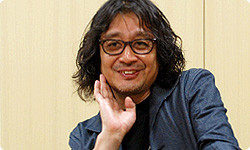 That kind of thing does happen, it’s true. When plot foreshadowing and mysteries start to get tangled up, the general outline starts to look like something different to what you’d intended. You start to feel that it’s been distorted.

That’s right. After you’ve calmed down, however, you look at it again and sometimes realise this is not actually the case.

Sometimes it’s surprisingly okay, isn’t it? Having said that, there are often problems such as one plot line standing out a bit too clearly, for example.

Yes, absolutely, that happens. The worst case of that I’ve ever experienced was actually on this project.

Once you’d got yourself out of that predicament though, Sakamoto-san, you got more and more involved with development on a micro-level and ended up doing pretty much anything and everything, including working hard on making detailed timing adjustments and things like that. For Metroid: Other M, you thought you’d try and seamlessly fuse parts that you wanted to be fun to play as a game with parts where you wanted to present the story. What kind of thought process did this involve for you, Sakamoto-san, and what kind of thing was the starting point for your thinking?

When we made Super Metroid19, we incorporated a bit of storytelling in the production, inserting, right at the end when Samus is just about done for, the scene where the baby Metroid comes to rescue her. There was quite a lot of disagreement among the staff when I decided to do this, questioning whether it would be a case of completely taking control away from the player. 19 Super Metroid was an action game released for the SNES in March 1994 in Japan and in July 1994 in Europe. It was the third game in the series.

So they were asking ‘it’s a game, so is it really ok that the player can’t control it?’, were they?

Yes. They said things like ‘this is terrible, players are surely going to be angry about this as well’, but I took a risk and tried doing it anyway, and the reaction was pretty good. That’s when I felt we were onto something...

The scene you mentioned is shown as a movie during the opening stages of the latest title as well. When you first created that scene, Sakamoto-san, you thought that even action games were capable of telling stories, didn’t you? 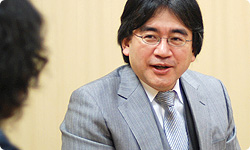 Yes, I did. However, there was a gap in the Metroid series after that, and after nine years, I was involved in the development of Metroid Fusion by thinking ‘let’s make a title with a more pronounced storytelling element’. That time too, I’d have to say it went quite well, even if I do say so myself...

You felt you were on to something again, right?

Yes. I got the feeling that we’d created something that had a mature, perhaps you could say serious, storyline, but was also a proper Metroid action game. As a result, I thought ‘this is a direction things could take in future...’. On the other hand, given the limitations of the 2D scrolling Metroid style, I did feel a dead end had been reached, and I wondered ‘can action games really be taken any further?’

You wondered whether action games as a means of holding a story together would ever be able to evolve?

That’s right. I felt that as time passes, there was a growing tendency for demanding comfort and convenience in games. Players would say things like ‘I hate difficult games. I don’t really want to see the game over screen.’ This didn’t mean we could just wildly increase the amount of save spots, or, straight after the player receives damage, give them more than enough energy to cover it – if we’d done that, the result would have been people saying ‘there’s no point, why did we have to go through the original challenge in the first place?’

The players would conclude it was made that way solely for reasons of expediency! (laughs)

That’s right. Because of this, I kept thinking ‘what can we do with Metroid?’, until I ended up with this latest game, Metroid: Other M. At first I thought I’d try rebuilding Metroid as an action game from scratch, without tying myself down with any predetermined rules. I decided to make something which, despite being a 3D game, could be controlled using just one Wii Remote and which felt like playing a 2D game. This was triggered by my feeling that people don’t really want complicated games. I thought that such simple controls could become a way to weave a story, rather like selecting the commands in a text-based adventure game. I therefore thought that if the cinematics could be well-connected, I’d be able to make an action game that was like a text-based adventure. I would say to people around me, half-jokingly, things like ‘We’re making Metroid Tantei Club (Metroid Detective Club)!’.

Looking back on the software titles you’ve been involved with, Sakamoto-san, they’re certainly unique, shall we say, as well as being rather inconsistent in style – to the extent that you can make a joke like that!

Anybody who sees that the very same person who made Metroid: Other M also made Tomodachi Collection20 and the WarioWare21 series - not to mention Famicom Tantei Club and Tokimeki High School with Sakaguchi-san all those years ago - is sure to think ‘what on earth is this dynamic range he’s got?!’. (laughs) 20 Tomodachi Collection is a Nintendo DS game to enjoy communications with characters who resemble your friends and others whom you know in your life. It was released in June 2009 in Japan. 21 The WarioWare series of games are compilations of several instant action minigames. So far, a title from the series has been released for every system, including WarioWare, Inc.: Mega Party Games!, WarioWare: Touched! and WarioWare: Smooth Moves. The first game in the series, WarioWare, Inc.: Minigame Mania was released in Japan in March 2003 and in Europe in May 2003. Sakamoto was the producer.

His range is just too wide! (laughs) You also created the basis for Mii, didn’t you?

The origin of Mii characters was Sakamoto-san coming to me and showing me some really good caricatures he’d created using the Mii structure. That’s what triggered the whole thing. If I’m to speak plainly, Sakamoto-san, you came to me that day because you wanted to show off, didn’t you? 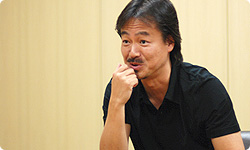 It was actually the other way around.

At first we thought of a game that would be based around fortune telling, and although it seemed we could do something, it didn’t look to be taking shape as a product. The staff’s retaliation for reaching this dead end was to create some kind of montage.

Huh, they made it as retaliation for reaching a dead end?

Yes, they did. (decisively)

(laughs) At first we called it ‘the grown woman’s fortune-telling notebook’. That ‘grown woman’s fortune-telling notebook’ later saw the light of day as Tomodachi Collection, but the prototype for that game was Tottoko Hamtaro Tomodachi Daisakusen Dechu22, another game the development of which Sakamoto-san was involved with. 22 Tottoko Hamtaro Tomodachi Daisakusen Dechu was friend-finding software for the Game Boy Color which supported the infrared connection feature. It was released in Japan in September 2000.

Ahh! Yes, I know that software well. My daughter used it a lot.

Oh, is that so? The partner compatibility and suitable occupation diagnoses are curiously accurate, you know.

Yes, I’ve tried them myself, many times!

My daughter would come up to me and say ‘daddy, let me tell your fortune’. The words it would come out with would be really interesting. It was so popular in my house that I can remember some of them clearly. Everyone - even my daughter’s grandmother - would have their fortune told.

My daughter is also completely addicted to Tomodachi Collection. But I didn’t know it was made with Hamtaro software in its development background. Our family has been playing with Sakamoto-san’s games without noticing you were behind them. Well... What a surprise!

Thank you very much! (laughs)