3. Moving the ‘Tofu-kuns’ in Last Story

Sakaguchi-san, 23 years ago you made Final Fantasy, and, as hardware has rapidly evolved, you’ve continued making games. How will your current game, The Last Story, be connected within the process of dramatic change in the game-making environment?

In my case I’ve certainly made all sorts of different things as hardware has evolved. For example, when Jurassic Park15 was released, I remember being incredibly surprised, thinking: ‘they can display these kinds of images...?’. Because the CG they had produced was so beautifully composed, and partly because I’ve always been curious to try new things, I suppose, I got really into it. From that time onwards, the style of Final Fantasy gradually changed as well. 15 Jurassic Park is a cinematic adaptation of a Michael Crichton science fiction novel, directed by Steven Spielberg. It was released in 1993.

So you took the route of pursuing beautiful CG, did you?

Yes. After that I quit Square, took a little break and made two games, but they had a similar style as well. As you might expect, the story was the base, and on top of that we’d add beautiful CG movies, fusing them with what you’d call an RPG structure as we did so. That was the direction we took when making the games. For The Last Story, however, I thought I’d try ‘resetting’ this method.

So in a sense, you tried ‘resetting’ the method that you’d been using for 23 years. Why was that?

I somehow felt like I’d arrived somewhere different to where I was thinking of. In order to go back to the starting point, I decided I’d start making The Last Story right from the research and design stage.

For this game, it seems like you were doing some experimental stuff over a considerable period of time.

That’s right. In the beginning there were two moving objects that you could play with, like lumps of red and blue tofu. We called them the ‘Tofu-kuns’. (laughs)

Until now, I tried to only choose game systems that were appropriate for the story. If this results in a game that’s no fun, however, there’s no point in doing it. That’s why I started out this time by looking again at every aspect of the game, starting with its core elements.

It’s two-and-a-half years since you started development of this game, and yet you’ve been thinking constantly ‘what makes a game fun?’, haven’t you? 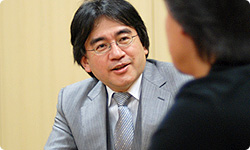 Yes, although conversely that made it very tough to put the story in place. While the final product, therefore, does have a really tight story and movie-style production, if I had to choose which element is stronger in this game, I’d say it was the gameplay. Of course, there is an underlying storyline, providing flavour for the game, so... What can I say...? Well, it’s not like a thoroughly wrapped sushi roll; it feels more like it’s pierced with a toothpick.

So the story doesn’t run continually throughout the game but, just like you stick toothpicks, you inserted the stories in the pivotal points - is that what you mean?

Yes, that’s what I mean. It wasn’t a case of being ‘based on the story’, it was more that the story would be put into the game itself. This meant that I prioritised the game systems for the first time in ages – since FFVII16, in fact, so 13 years. Because the question back then was how to implement 3D in the game, I made the systems the priority for that game too. 16 FFVII = Final Fantasy VII, an RPG released in January 1997 in Japan.Prior to that, when making the original FFI, I looked at lots of PC role-playing games from the period, and could therefore consider which elements from these games could be used and how they could be implemented on the NES. This involved a lot of trial and error. Come to think of it, though, I’ve thought about the game systems first like this only three times in a 23 year period.

Meaning that The Last Story is the third time?

Yes. The third time has finally come. (laughs) This time I really wanted to put my heart and soul into making something I would be satisfied with, so I even enlisted the help of Mario Club17. 17 Mario Club Co., Ltd. performs debugging, testing and so on for Nintendo’s software under development.

It’s actually because you happen to be shut away with Mario Club right now that we were able to do this ‘Iwata Asks’ session. Why did you think you should spend four days with Mario Club?

I made the request to them because it’s important to have your game played by people who’ve never played it before, as you can imagine. By observing someone who’s playing the game for the first time, you really get to understand which parts make them happy, things like that. Of course, you could also get them to write down their thoughts, but that’s a bit, well...

You really have to actually see the players for yourself, don’t you?

Exactly. There are certain issues with asking people to write down their thoughts. They might only write nice things, for example, and furthermore perhaps the things that players really liked are different from the impressions they write down.

Writing ‘this part was good’ does not necessarily mean that person liked it, and furthermore people might well forget the parts where they felt the game outsmarted them, right?

Exactly. By watching people play from behind, however, you really get to understand how they feel. Of course, we could have assembled a group of testers in Tokyo, but no matter how we did it, they’d have ended up tending to be people who were familiar with the games I’d made previously. At Mario Club, however, I’d heard there were people who, while familiar with games, tended to play recent Nintendo games. That’s why I wanted to observe their reactions and thought I’d personally visit Mario Club. 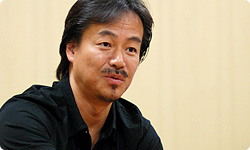 A little bird told me that Sakaguchi-san, as a result of his earnest desire, was going to be shutting himself away with Mario Club for four whole days. I was really surprised to hear this, but at the same time I got a new sense of your enthusiasm, Sakaguchi-san.

I’d stand behind the players and just make some notes. On the first day, however, the players weren’t used to this, so even when I’d ask them ‘do you have any requests you’d like to make?’, they’d just stay silent and wouldn’t answer. By the fourth day - today - though, people are used to the system, and since it’s the last day as well, everyone’s saying whatever they like freely. As a result, I feel I should probably clear off pretty soon, else I’ll start getting offended... There’s only so much a man can take, you know...

That’s why four days feels just about right. It was really beneficial, though.

People said what they thought, which sometimes offended you, though at other times there were lots of things that you really appreciated, weren’t there?

I did similar things during my time at Square, and quite unexpectedly some of the testers from those days started working for the company in areas such as planning.

In reality, there are an awful lot of cases where the opinions of testers have significantly improved a game. This is because they’re capable of doing things like bluntly pointing out issues that are difficult to notice from the game-makers’ point of view. There are also things that you only notice for the first time when observing their reactions from behind. At the end of the day, all the ideas do not come from one person, and it’s the director’s job to select which ideas to adopt. So in that sense as well, Sakaguchi-san – that is, from a director’s point of view – you’re getting involved with the actual development of the game for the first time in a while.

Yes, it really has been a while... Though it does mean that I haven’t seen my family for several months.

You on the other hand, Sakamoto-san, spent an awful lot of time shut away in Tokyo, didn’t you?

Sakamoto-san and I have regular meetings for him to report on projects’ progress. From spring onwards, however, there was a period when we didn’t meet for a while, and we weren’t reunited until we met in the USA, in the E318 exposition hall. 18 E3 2010 was a computer game trade fair held in Los Angeles on the 15th-17th June 2010.

‘It’s been a while!’ I said. (laughs) I’d spent three or four whole months at the TECMO development offices from spring onwards, you see. 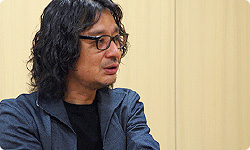 It seems that Sakamoto-san’s daily routine involved going around their office asking, close to midnight, ‘who’s going to be the last to leave today?’ (laughs)

You have to adapt to the development environment, don’t you?

You can’t really stay behind at another company’s office if there’s no one else there, you see.

But sometimes you’d say ‘someone’s staying at the office until the next morning, so I can stay pretty late’. You’d sound so happy when you explained that to me.

Ah, because working hands-on like that is fun, isn’t it! (laughs)

So you were completely immersed in your latest project as well, then, Sakamoto-san?

Yes, both Sakaguchi-san and I were, in a similar way, able to really put our heart and souls into a project and immerse ourselves deeply for the first time in ages. (laughs)