In the early days games started out without much story to them. As games have developed, both Sakaguchi-san and Sakamoto-san, have, in your respective capacities, moved in a more ‘storytelling’ direction. What was the original trigger that made you take the first step towards making ‘storytelling’ games, Sakaguchi-san?

The trigger for me was the Apple II5, which I used to play with when I was a student. I was playing all kinds of adventure games back then, and that’s when it struck me: ‘There are stories in computer games!’ . 5 The Apple II was a personal computer introduced by Apple Computer (as the company was then known) in 1977.

When you think of computer games from that period, they were almost all block-breaking games or simple shooters, so for these games to make you think ‘there are stories in computer games’...

It was a culture shock... In fact it was a double culture shock, in the sense that these games also came from a western culture, having been made in America. After that I made a lot of games using my PC, all of them adventure games. From then on I had a strong desire to create games that contained stories. I wasn’t particularly aiming to do it professionally, though, and such a thing wasn’t really possible in any case.

In those days you couldn’t post things on the Internet or anything like that, so as places to tell your stories, games were perfect for you, Sakaguchi-san?

Yes, they were perfect, and I happened to have the means to make them myself.

So your student hobby naturally led to your involvement with games that told stories?

That’s right. It was an extension of playing games.

So your hobby developed, and what you’re doing now is just an extension of that...

Yes. There was no such word as ‘game designer’ in those days, you see.

I also started my video game career by sort of falling into a part-time job. At the start it was, indeed, an extension of playing. What about you on the other hand, Sakamoto-san? What sparked your interest in games that told stories?

My first experience with text-based adventure games was Portopia Renzoku Satsujin Jiken6 on the NES. 6 Portopia Renzoku Satsujin Jiken (‘The Port Pier Serial Murder Case’) was an adventure game published by Enix (as the company was then called). The PC version was released in 1983 and the NES version was released in November 1985 in Japan.

That was (Yuji) Horii-san’s7 first adventure game title, wasn’t it? 7 Yuji Horii is a game designer responsible for the development of the Dragon Quest series and other titles.

That’s right. My reaction when I played that game was exactly as Sakaguchi-san mentioned: ‘Games are capable of things like this...’. I thought the interactive part was really fun – choosing a command to elicit some kind of reaction – and there were parts where it felt like my emotions were really being controlled. I started thinking ‘I’d like to try making a game like this’. Around that time, before we made Tokimeki High School, my superior back then, Gunpei Yokoi-san8, came to me and said ‘we need to make a game with the title Famicom Shonen Tanteidan (Family Computer Youth Detective Group)’. I therefore started working on its development alongside another company. 8 During his time at Nintendo, the late Gunpei Yokoi worked on the development of game consoles such as the Game and Watch series and the Game Boy. He was also involved with the development of the R.O.B. and Dr. Mario. 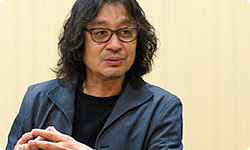 It was, yes. I had an interest in text-based adventure games, so when I started working on the project I was thinking ‘I really want to do this’. It didn’t go very well at first, though, because the company we were working with hadn’t thought about creating something which focused on the development of the story. I personally thought it would be better to make something like Portopia Renzoku Satsujin Jiken, something with a tight story that would surprise players and take them through highs and lows of joy and sorrow. That’s why I went to my superior at the time and asked ‘can I try writing the scenario for this game?’

Did you have any scenario-writing experience at the time, Sakamoto-san?

No, I didn’t. But the company I was working with had suggested a basic concept along the lines of: “The boy with no memory is actually...”. With that as my starting point, I thought ‘I wonder if I can think of some kind of story using this theme?’.

Wasn’t it a bit reckless for someone who was basically a novice to suddenly try and take that concept and turn it into a scenario?

Yes, it certainly was reckless. (laughs) But I’ve had that reckless streak in me for a long time now, and even though there was no basis for it, I did somehow think ‘I wonder if I could do this...’.

That might be something that people from our generation have in common. Because we happened to become front runners in the video game world by luck alone, and at times thought ‘it’d be fun of we could do this’ or were daring and thought ‘we’ll work it out somehow’, the way forward often revealed itself to us gradually. We have plenty of experience of this, which is probably why we share this mentality. 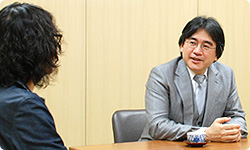 That’s right. When we followed that exact pattern for Famicom Tantei Club, everything happened to fall into place. Though of course there were other times we tried it and it didn’t work out so well. (laughs)

So you started encountering games that told stories, Sakamoto-san. You made two Famicom Tantei Club games...

After making the two Famicom Tantei Club games, the next story-based game I made was Kaeru no Tame ni Kane wa Naru10 for the Game Boy. After that, I wrote stories for Card Hero11 and Metroid Fusion12. I also wrote the scenario for the latest Metroid title, Metroid: Other M. 10 Kaeru no Tame ni Kane wa Naru (‘For the Frog the Bell Tolls’) was an action RPG for the Game Boy, released in Japan in September 1992. 11 Card Hero refers to Trade & Battle: Card Hero, a trading card game released for the Game Boy Color in February 2000 in Japan. 12 Metroid Fusion was an action game for the Game Boy Advance, released in Japan in February 2003 and in Europe in November 2002. It is the fourth game in the series.

I see, so that’s the kind of progression you had. Sakaguchi-san, after you made the first Final Fantasy game in 1987, the second game, FFII13, came out the very next year, meaning that in those days players could enjoy a new Final Fantasy game every year, right? 13 FFII = Final Fantasy II, an RPG released for the NES in December 1988 in Japan. It was the second game in the series. In Europe it is now available for Virtual Console on Wii.

Yes, we made releasing a game every year one of our aims at the time. They were sometimes called ‘sitting at the kotatsu (traditional Japanese fireplace) role-playing games’...

Ah, I see, so when it became the season for sitting at the kotatsu, you wanted players to play Final Fantasy, is that right?

Exactly. Though we were only able to do it up to FFII, we did somehow feel that we’d like to line up the releases with the end of the year. 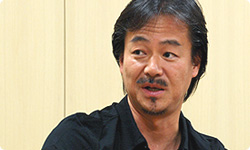 I remember hearing that at the time as well. The planned year-end release of Dragon Quest III14 was delayed, so Sakaguchi-san said ‘there isn’t a ‘sitting at the kotatsu’ game this year!’. 14 Dragon Quest III Soshite Densentsu e... was an RPG released as an NES game in February 1988 in Japan. Remakes were also released in Japan for the SNES and the Game Boy Color.

Yes, I said that. I thought we should have a ‘sitting at the kotatsu’ game. The delay of Dragon Quest III had left a vacant seat, as it were, so I thought I’d jump in there. It was a big seat to fill! (laughs)

And from then on you’ve always thought about all such details when making a game, haven’t you, Sakaguchi-san?

Yes. Sakamoto-san mentioned earlier that he was just a novice when he first tried writing scenarios, and I think in that period you could do anything. Not just making things, but also management, advertising and so on – it was an era where you would turn your hand to everything that came along. For better or worse, I suppose you could say that this is the kind of hotchpotch in which games were made.

It’s certainly true that these days work of all kinds is divided up. However, I think work on the products you’re involved with is only really complete when you have experienced thinking about questions such as ‘how can I communicate our messages contained in the products to the player?’ or ‘how am I going to deliver the product so that the consumers can enjoy it’.

It was an era when we thought for ourselves and it felt like we could do anything.