So how did you come to head up your own independent team, Takahashi-san?

I recall going to see Sakaguchi-san and telling him that I was looking for a new challenge. That was when we were all in the middle of FFVII.

FFVII marked a real turning point in the series. For someone who was such an integral part of it to start out on their own, well, Sakaguchi-san, it must have been hard to lose him, even while you wished him the best.

Yes. That’s true. If I’m being honest, I felt a little lonely. One really clear memory I have is that no sooner had Taka-chan formed a separate team than his desk became completely covered in Gundam models and toy guns. It was then that I realised he’d always wanted to work on this kind of thing. It was as if he’d graduated.

Right. Well, that was just the sense I got...

...So that’s what you were thinking! (laughs)

When you left the FF team, what kind of thing did you want to do?

I wanted to see whether we could make a game entirely in 3D, not simply the event scenes. My initial motivation was to try to make games that achieved that.

So you wanted to utilise 3D in a way that differed from its use in FFVII.

That’s right. I felt that the company needed to develop knowledge on how to utilise 3D in a different way from that of VII. I wanted to make levels entirely three-dimensional and allow the player to freely alter the angle they view the game world at.

There’s a real difference between simply being responsible for the graphics, and coming up with entire game concepts and bringing all the necessary elements together.

Indeed there is, and I really had to feel my way at first.

But back then, everyone was just feeling their way.

FFVII was entirely a process of feeling our way.

I’d go as far as saying that, back then, there was hardly anyone who had a clear conception of what the finished product would be from the start.

Ninety percent of my team were actually new kids who didn’t know the first thing about 3D. The most difficult thing was the psychological side: helping people adjust to the team, talking through their worries and concerns with them, and so on. It was then that I realised that Sakaguchi-san had been dealing with this kind of thing all along. 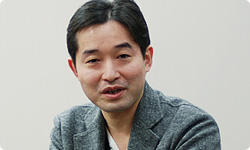 It’s only when you fly the nest that you realise what your parents did for you! (laughs)

I see what you mean!

Sakaguchi-san, when did you first become aware that it was essential to look after your team? The first FF was done in a short space of time, with few people on board, so I’d imagine that you didn’t have much time to be thinking about the psychological well-being of your staff.

You’re right. But up to FF III7, we worked with a really gifted foreign programmer who didn’t speak Japanese or really understand RPGs. This called for a specific kind of supervision. So I’d take him out for a steak every day and... (laughs) 7Final Fantasy III was an RPG released for the Famicom in Japan in April 1990.

You took him for steak every day? That’s quite something! (laughs)

All he would eat was steak. I knew that I had to make sure that all was well with the main programmer. While that wasn’t a case of looking after the entire team, that was an example of the kind of care I took of my staff.

You lived through the era of the Super Famicom when there were huge changes in game development, with ROM with more memory capacity at your disposal and increased graphical capabilities. But then when Takahashi-san got his own team and began to make a name for himself, it heralded the arrival of an even more radical change: 3D. As game development rapidly became more and more specialised, with 3D and improved graphics, there was still no defined or agreed method for making a game using them.

With the arrival of the 3D, there was a clean slate in terms of the way games would be made, which caused all kinds of trouble for the industry as a whole.

Most people didn’t even know the correct terminology for the new types of computer graphics. When you added to that the fact that you were trying to run a team, it really felt like you were casting yourself into a storm by carrying a number of people.

Facing the immense challenge of running your own team, what was it that spurred you on and kept you going?

Let me think. Well, I had a strong sense that I could definitely do this, that it was going to be alright. That was the only thing I could really fall back on. Now when I look back at it, I realise that if I’d done more to inspire that same feeling in my staff, it would have been easier to build a team.

Even when you can’t make out what’s up ahead, that strong desire to make something happen can pull people together and get them to make it to the end. That may be something that the young are especially good at. 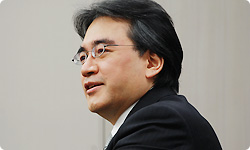 Right. And even if it was somewhat reckless, we managed to push through and get the job done.

Things that end up being incredible tend to start off looking like crazy ideas. I wonder if sticking too much to what’s tried and tested can actually hold you back.

I would say so. I think we went about things the right way.

It really feels like what we did then has built what we have now.