Now, this is something that has been pointed out by developers outside of the company. Including HD support, there had been times up to now where you could do things on other companies' hardware, but was difficult to do on Wii.

With Wii U, I also wanted to alleviate those restrictions as much as possible. I may be exaggerating by saying that with Wii U, we are posing a challenge to all creators. I want to challenge them by saying, "Wouldn't your creation be better, while keeping all of its strong points with this new structure that we are offering?" and "Doesn't this hold the key that could resolve a years-long dilemma?" 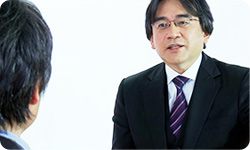 I think so. Well, I think that's really aimed towards me, actually.

With this new structure that we are now offering, we have come to recognise that we are now able to solve a number of issues that we feel have been surrounding us for years, so we really feel that this has potential. I think this is something that developers outside of the company are feeling, and developers besides you, Miyamoto-san, are thinking of as well.

If they can think of it that way, drastically new play styles can become possible, and what had been thought of as the limits of past play styles may change. We debated for quite a long time about all kinds of things, but particularly, we discussed extensively about how we can talk about possibilities of what can be done for people who are connected to a network, but what kind of value it would have to those who are not connected.

From those discussions, I think we're now able to start preparing for solutions for both types of people.

For those who aren't connected, what aspect of its possibilities are you most interested in?

I think first and foremost it's the new possibilities of multi-person play the new controller can offer, but I'd like to point out the relationship that video games have against standard television programming. With the way it is now, I think video games very commonly are responsible for creating situations that either take the TV away from the parents when the child wants to play video games, or the children can't play because the parents are watching a show on TV. But with the new controller, it has become clear that the two can now coexist. 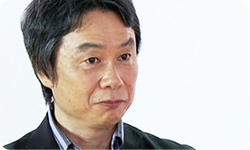 The new controller resolves those situations in a different way.

The other thing is, shortly after the Wii console was released, people in the gaming media and game enthusiasts started recognising the Wii console as a casual machine aimed toward families, and placed game consoles by Microsoft and Sony in a very similar light with each other, saying these are machines aimed towards those who passionately play games. It was a categorisation between games that were aimed towards core, and casual. I've been having a sense of disagreement as I personally think the definition of a core gamer is much wider, namely, someone who has a much wider range of interests, someone who enthusiastically plays many types of games that challenge different creative directions. On the other hand, I certainly do not think that Wii was able to cater to every gamer's needs, so that's also something I wanted to resolve. The keyword for our presentation at this year's E3 is "Deeper and Wider". With Wii U, I would like to offer this proposal with that concept. Of course, with the Wii console I'm sure everyone would agree that we tried really hard to go wider, but even though we worked aggressively to go deeper in certain areas, the general public's impression that Nintendo was casual grew as time went by. But first of all, your works have definitely laid the structural foundation of games that are considered core today, Miyamoto-san. 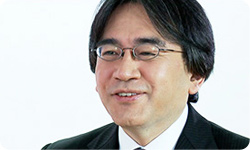 Well...people in the media tend to categorise into different genres, the core and casual because it's easier to characterise it that way. But as you can see with games like The Legend of Zelda, Nintendo is fully staffed with members who are into working on a very core level of detail. And because we know that, we haven't really taken those accounts seriously. But one of the key reasons that such things as the core and the casual exist today is that we decided not to adopt HD on the Wii console. Of course, besides that there are things like issues with the controller and the challenges that it brings, network functionalities and many other things, but I think HD was the biggest factor that everyone was able to clearly understand the difference. In terms of the HD capabilities, Wii U can do something similar, and on top of that, it is equipped with this new controller that adds an entirely new structure to games. I think this is an opportunity for those games that were considered to be core up to now, to evolve into something even more interesting, structurally. In that sense, I do wish all kinds of games would be released, regardless of the debate over core or casual.

That core vs. casual debate seems like something that can never see a resolution, but with Wii U, I have a feeling that it all may change. I even feel that the barrier that separated the two genres was only something psychological, just an impression that people had about them. For example, The Legend of Zelda games were something geared towards the toughest audience, and it has been so from the beginning. So it's not like at Nintendo we don't have it in us. But there are quite a number of people who assume that Nintendo is the equivalent of being casual. If we are able to break those psychological barriers with Wii U, I feel like we will be able to take our goal of expanding the gaming population even further. It would even be possible to expand our customer base and bring in more people, and out of those new people, there will be those who will find certain controls or elements of deeper gameplay intriguing, and eventually will become passionate game fans. That was the way the history of video games has been, and I want to keep the tradition going so it doesn't fade away. That, I think is the true meaning of "a game for everyone". A game for everyone isn't just wide, but also very deep. That's how it will become everyone's game.

I agree. I feel like it's becoming a device where it can perform really well whether it goes in the living room or in a bedroom.

Now to close this interview, as Nintendo is working to deliver Wii U to customers, can I ask you to say a message to our readers, Miyamoto-san?

Let's see... I think what I want to say is that finally, in the long history of video games, you're now able to play our (home console) games only using a device made by Nintendo, and nothing else. We always depended on the television until now, but it feels like we're finally leaving our parents' house.(laugh)

I have a feeling that this feature will change the limits of the home console, and I'm looking forward to what game developers around the world can come up with. I really would like for people to proactively use it in their everyday lives. 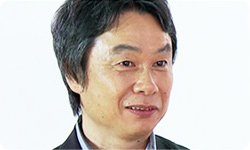 It's a matter of how we can actualise, with this new format, on what we debated over many years. It's the vision of a new game console that exists in the living room, and how it should be played within the household. I think it's a lot of responsibility, but it's very exciting at the same time. So you'll do your best working hard until launch, right?

Yeah, I think so. I want to make it a machine where it's fully leveraged in the household. I hope it becomes something where people won't be able to imagine life without it.

It's not just for everyone who's reading this interview, but also for everyone in his or her family. Thank you very much for your time today.