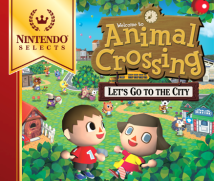 The first core element I’d like to discuss is WiiConnect24. This is a system which is able to transmit and receive data, even when you're not playing Wii or when you're asleep. So when I first heard the concept, I really thought: “This sounds like it has been designed for Animal Crossing!”

I was also conscious of this on some level from the time we originally devised the Wii concept. They may not have said it at the time, but I’m sure that among many of those working on Wii hardware and the system functions, there was a feeling that they would like to see these fully utilised for Animal Crossing.

On our side, we certainly felt that weight of expectation. You could sense a kind of unvoiced demand: “Make sure you use this function!” For me, the most appealing aspect of WiiConnect24 is that even when the player doesn’t think he’s making contact with other players, that connection is there in the background. In the DS version, the use of Nintendo Wi-Fi Connection3 added a fun element, but it could also entail quite a bit of effort. 3 Nintendo Wi-Fi Connection is a system that connects the player to the internet and allows them to enjoy games or other applications together with players around the world.

When you were planning to take a trip to your friend's town, you needed to arrange the time beforehand and make sure that you were both using Nintendo Wi-Fi Connection at the same time.

And one player might want to play at a certain time that didn't really suit other players. For that reason, this time round we wanted to use WiiConnect24 to allow players to enjoy the communicative element of the game more, without having to make this effort.

Could you tell us what precisely WiiConnect24 adds to the game? 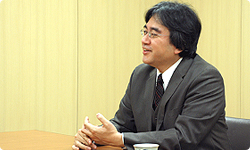 What do you mean “stole”? It was you who developed the Mii Channel! (laughs)

Well, you have a point there! (laughs) So we used an idea from the Mii Channel, and decided that we would have the data about players' towns automatically exchanged with their friends. This exchange of information started with the DS version, when you needed to have two separate consoles, each with a Game Card, connected. But this time around, by connecting to WiiConnect24, without one player having to visit the other player, the town data could be exchanged before either player knew it. So then all of a sudden you’d get an animal that’s

Video: new in the neighbourhood

The first core element I’d like to discuss is WiiConnect24. This is a system which is able to transmit and receive data, even when you're not playing Wii or when you're asleep.
new in the neighbourhood , who’s just moved from your friend’s town, introducing himself: ”Hi! I’ve just moved from ----- town."
Iwata:

And “---- town” would actually be a real Animal Crossing town.

Right. And they’ll even tell you gossip about their home town: “This character from ----- town really likes this”, and things like that.

So more and more gossip will get spread from one town to another without you realising it.

Actually, there was a specific incident that gave us the idea to do this. It was something that Hideki Konno-san from our department told me.

It seems that Konno-san, his wife and their son all enjoyed playing the DS version of Animal Crossing. His wife was apparently a keen fan of fishing, and she spent so much time fishing that their son actually complained to her, saying: “Mum, will you stop going fishing?” 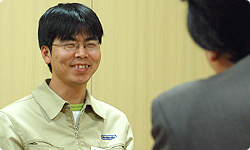 I’m sure that their son also loved fishing, and he was just jealous that his mother was catching such great fish! (laughs)

It seems that’s exactly what it was! (laughs) So the mother resisted the urge to go fishing when her son was there, but she would sneak off and fish when he wasn’t around.

Then one day their son was playing when an animal came up to speak to him and mentioned his mother. The animal said: “She’s does nothing except go fishing!”

So it was one of the animals that told him what his mother was up to! (laughs) No one would expect a character in a game to gossip or spread rumours!

It would really take you aback! You wouldn’t expect to hear that sort of thing from a character like that in a million years!

And in the Wii version, even if the animals don't reveal your secrets, another player might just see something on screen that tips them off. (laughs) 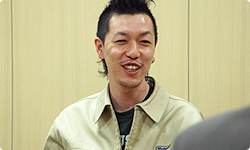 What do you mean by that?

Around the town, there is what I suppose you could call undergrowth. There’s green grass, but underneath it, there’s earth. This time, we stuck the grass on so it feels a little like it's floating on top of the earth. When a player walks on the grass, it wears it away so you can see a little bit of the earth below.

So there is data for each square of earth in the grid in Animal Crossing, and the information about whether each of the squares has been stepped on is retained?

Exactly. So as the player walks around, the grass is gradually worn away. We made it so that it starts to grow back after a day has passed. But if, for instance, you were to go to Tom Nook’s store every day…

I see! You would leave animal tracks.

Well, the player controls a human character, so I suppose you would call them footprints rather than animal tracks. (laughs) So if a player is doing nothing but going fishing, the grass on the path from their house to the seashore or the river will be worn away. And where there’s a bridge which everyone has to walk across, the grass will be completely worn away.

So all someone needs to do to see if their mother is always sneaking off to go fishing is to follow the trail in front of their house!

So even if when you visit a friend in their town, you wouldn’t always have to check the map. You could just follow the path from the checkpoint and make your way straight to their house. 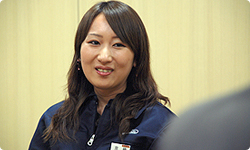 I see. That’s an unexpected bonus! (laughs) Out of interest, how often would you have to walk over an area of grass to leave a trail?

If you walk over it for about two weeks, it would have begun to look a little like a path.

And it would take perhaps two months for it to look like a proper path.

I’m speechless! I mean this as a compliment, but all I can think to say is what on earth possessed you to put a feature like that in the game? (laughs)

Remember that while the grass will slowly grow back, the speed at which it grows will change depending on the environment. If it's an area full of trees and grass, or where flowers are planted, the grass will grow back more rapidly.

So before you knew it, you had ended up with a small-scale gardening simulator built into the game! (laughs)

You can even cultivate the grass on your lawn in the way you want! (laughs)

When an animal moves away from the town, a rectangular patch remains in the place where their house used to stand. When you see that and realise that this animal has moved away, it really makes you feel sad!

But of course, little by little, the grass will grow back, and as the traces of where the animal's house used to stand disappear, your memories of that animal will also fade.

So by the time the grass has fully grown back, you'll have completely forgotten that anyone used to live there! (laughs)