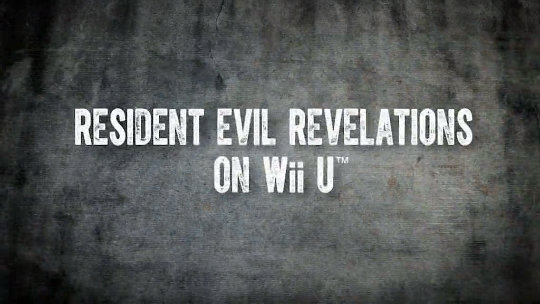 Bioterrorism Security Assessment Alliance co-founder Chris Redfield’s last known GPS data placed him on a supposedly abandoned cruise ship, shortly before his data signature vanished. On a mission to find out what happened to her long-time BSAA partner and close friend Chris, Jill Valentine and fellow agent Parker Luciani venture into the creaking depths of the ship to uncover the truth; sadly, the cruise liner isn’t as deserted as previously thought.

Elsewhere, Chris Redfield and new BSAA agent Jessica Sherawat can be found trekking through snowy mountain peaks, on a hunt for information about a terrorist organisation named Veltro. But the silent white peaks teem with hordes of terrifying, infected creatures bent on their destruction...

RESIDENT EVIL™ REVELATIONS brings classic survival horror action to Wii U: with limited weapons and ammo, the odds are against you, so you’ll need to make every shot count. From the dank, confined spaces of the cruise ship to the treacherous snows of the mountains, the environment is not your friend. You’ll need all your courage, skills and luck to survive – that and the Genesis Scanner, which you can use to analyse enemies or reveal hidden items that could make for nifty (and much needed) weapon upgrades.

So you feel as comfortable as it’s possible to feel when exploring locations full of terrible creatures whose only desire is your demise, you can choose between first-person or third-person ‘over the shoulder’ camera views. To make keeping your eyes on your laser crosshair pointer easier, you’ll use the Wii U GamePad’s touch screen to quickly and intuitively switch weapons, analyse evidence and solve puzzles.

Whatever you do, don’t let your guard down for a moment, or you’ll be up close and personal with the enemy – should you find yourself in this situation, the ability to execute melee attacks could save your bacon if you are on the ball enough to react in the face of full-on, mutated aggression.

In Raid Mode you’ll take on hordes of enemies, and you can play solo or co-op with a friend online. As you progress you can customise your weapons, and you’ll earn rewards and level up as you complete missions. In this home console version of the game, Raid Mode offers some exclusive enemies, brand new weapons, new skill sets, and Hunk and Rachel as playable characters too!

This Wii U title offers crisp HD visuals, enhanced lighting effects, an immersive sound experience, and much more. For the main game there’s now an additional difficulty level to offer an even greater challenge than before. Not only is it tougher than the Easy and Normal modes, but item and enemy placement is randomised – so even if you know the game like the back of your gun-toting hand, you’re sure to experience new thrills. On top of that, there’s a brand new type of enemy for you to look forward to meeting, but we won’t spoil the surprise…

Those who like to mix up their play styles can take the action to the GamePad’s built-in screen and enjoy Off-TV Play, or play with the Wii U Pro Controller and TV alone.

If you think your nerves are up to the task then steady your aim for RESIDENT EVIL™ REVELATIONS on Wii U.