Kirby and the Rainbow Paintbrush 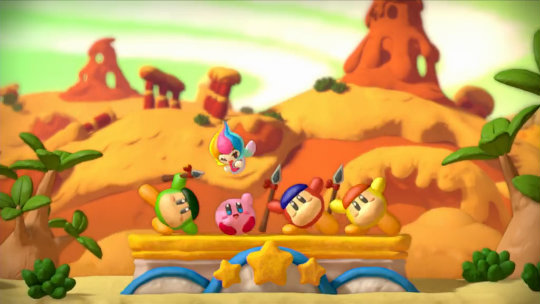 Dream Land’s been drained of all its colour in Kirby and the Rainbow Paintbrush for Wii U! Explore a wonderful world of clay in a colourful platforming adventure, using the Wii U GamePad touch screen to draw rainbow ropes for Kirby to roll along, or to block obstacles and enemies. Use every skill at your disposal to hunt down loads of collectibles and help bring Kirby’s homeland back to its bright and beautiful best!

It’s just another relaxing day for Kirby and his Waddle Dee friends, until a portal opens up and a mischievous villain called Claycia appears and steals away the colours, stopping Dream Land still. Luckily, a magical paintbrush known as Elline also emerges from the portal and restores Kirby and his friends to their usual colourful selves. Always ready for adventure, the heroes go after Claycia in hot pursuit.

Tap and draw on the touch screen to travel through each stage. Kirby, in ball form, rolls along rainbow ropes in whichever direction you draw. Sketch loops for Kirby to zoom round to increase his pace, or tap him to unleash a burst of speed, sending him smashing through enemies or blocks with a Star Dash! You can only draw a limited amount of rainbow ropes at any one time, though, so keep an eye on your ink gauge!

Kirby can completely transform into a variety of vehicles at certain times. Use rainbow ropes in different ways depending on your form: guide Kirby Rocket’s flight path, steer Kirby Submarine’s torpedoes at your targets, or direct Kirby Tank’s fire and forward movement with a combination of taps and rainbow ropes!

While the player using the Wii U GamePad controls Kirby and draws rainbow ropes, up to three additional players can drop in and drop out of the fun at any time, using Wii Remotes or Wii U Pro Controllers to play as Waddle Dees. Waddle Dees can run along rainbow ropes, collect items, attack enemies and pick up Kirby if he needs a helping hand.

There’s loads to find in each level, so search every corner and scrape away at every bit of clay to uncover everything, like hidden Treasure Chests containing music tracks and clay figurines of familiar Kirby characters. And if you really want to put your skills to the test, try your hand at Challenge Mode. Conquer one-minute challenges, in which four Treasure Chests have to be grabbed within 15 seconds each, or attempt to get 12 Treasure Chests in a row in survival challenges – miss one and you’ll have to start again!

In certain stages, you can also tap a compatible amiibo in to give Kirby new looks and extra powers. The Kirby amiibo lets you use Star Dash whenever you want, the King Dedede amiibo gives additional health bars, while the Meta Knight amiibo boosts Kirby’s dash speed, allowing him to charge right through certain enemies!

You can get in-game bonuses when you tap selected amiibo to the Wii U GamePad. Each amiibo power-up can only be used once per day, and only lasts for one stage, so choose when to use your amiibo wisely! 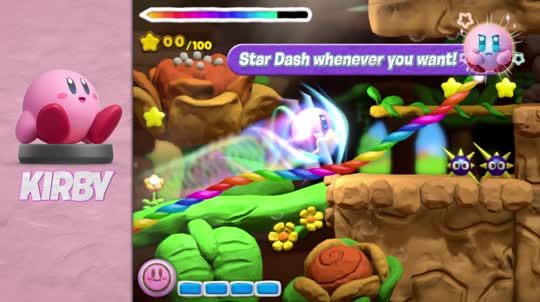 The Kirby amiibo lets Kirby use Star Dash whenever he wants, without the need to collect 100 Point Stars, while the King Dedede amiibo gives Kirby a hat fit for a king and two additional health bars. The Meta Knight amiibo gives Kirby a famous mask and boosts his dash speed, allowing him to charge right through weaker enemies. Find out more about amiibo at our official amiibo website.