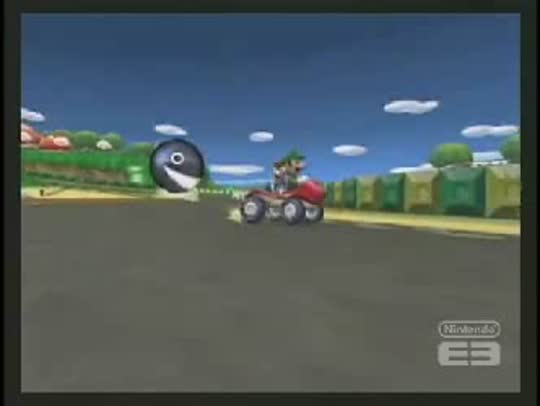 The first gave birth to an entire genre. The second delivered multiplayer perfection. The third was small but beautifully formed. And the fourth in the Mario Kart series? That's Mario Kart Double Dash!! - and its everything its velocity-packed prequels were, and much, much more. The character list is full of familiar faces - long-time kart pilots like Mario, Luigi, Peach and Yoshi, all present and correct on Super Nintendo, Nintendo 64 and Game Boy Advance, wouldn't miss this Nintendo GameCube incarnation for the world. But a host of new faces want in on the high-speed thrills, too, so prepare yourself for a character select screen crammed with the likes of Baby Mario, Baby Luigi, Koopa Trooper (welcome back!), Diddy Kong, Waluigi and more - making for a total of at least 16 riders. Why so many? Partly because, for the first time ever, it's two characters to a kart - with no restrictions on who pairs up with who, and your choice of kart independent of the racers you choose.

Peach and Daisy can join forces in Donkey Kong's rickety woodmobile; Peach's vintage pink auto can play host to a Baby Mario and Waluigi double-team; and Bowser can career around in Wario's comedy jalopy - with Mario in the back seat. The possibilities are near endless - and always funny. After the traditional start line countdown from little Lakitu, you're handed control of the kart with both its occupants - and the handling is as spot-on perfect as ever, the Control Stick and the L and R Buttons allowing you to slide and boost and dodge and bounce your way around each course with breathtaking ease. But it's the Z Button - which makes your characters swap seats - that unlocks Mario Kart: Double Dash!!'s true potential. It works like this.

When you crash through a rainbow-coloured item block, it's the passenger who nabs the power-up inside (brilliantly, you can actually see them holding it in their hands). But because each Double Dash!! character has access to a unique, chaos-causing super power-up - Bowser's colossal spiky shell, Donkey Kong's house-sized banana skin - there's real strategy in deciding which of your two karters is sitting in the back when you collect an item. Plus, item-holding passengers will hold onto their item if they're swapped into the driver's seat (big pockets, see), so storing up items and using them wisely makes for heavily - and hilariously - tactical play. Animation? Astonishing.

Racers trade stares as they pass rivals, back-seaters cling on for dear life after being knocked off the kart by questionable driving, and Luigi, as is traditional, hammers his kart in frustration when he loses. When you notice the individual wheels of eight vehicles turning and bouncing in response to steering wheels that you can actually see being turned this way and that by the smoothly-animated hands of plumbers, dinosaurs, turtles and princesses, you just know you're in the presence of genius. Double Dash!!'s courses have been laid out by Nintendo's finest landscape designers, the twists and turns, bumps and speed strips arranged in shapes that marry rollercoaster racing with hair-raising hazards - such as the barking Chain Chomp that makes a grab for you on Luigi Grand Prix, and the long Wiggler-shaped vehicles patrolling the highways of Mushroom City.

Floodlit stadiums, balmy jungles with perilously undulating log bridges, and Isle Delfino-situated town-and-beach courses are just some of the sights you might notice flitting past your speed-fogged eyes. Nintendo connoisseurs will also glow warmly upon seeing the return of the classic Mario universe's 'everything with eyes' policy in the gorgeous track scenery - anthropomorphised hills, clouds and flowers smile benignly as you whiz past, and a volcano glares as menacingly as a volcano can at the karts bouncing around on its chin. Mario Kart just wouldn't be Mario Kart without the ability to have you and your friends whooping and yelling in blissful multi-joypad abandon - and Double Dash!!'s carefully-balanced karts, tracks and power-ups (plus the faithful weapon-chucking Battle Mode) offer up more multiplayer merriment than ever before.

We defy anyone - veteran gamer or console newcomer - to sit down for one laugh-packed lap of tit-for-tat racing without feeling their entire evening slip into the comforting hug of Nintendo at its best. And this time, the fun isn't limited to four players. Because using Nintendo GameCube Broadband Adapters, you can link multiple Nintendo GameCubes and TVs and bask in eight-player Mario Kart: Double Dash!!. You simply haven't lived until you've experienced it. There's plenty more to Mario Kart: Double Dash!! that we'd rather you find out first-hand - and be assured that you'll still be uncovering secret short-cuts, new character strategies and quirky animation touches months after you're given your first green light by Lakitu. It's funny, fast, frantic and overflowing with multiplayer brilliance - and probably your only chance to see Luigi driving a pink car.