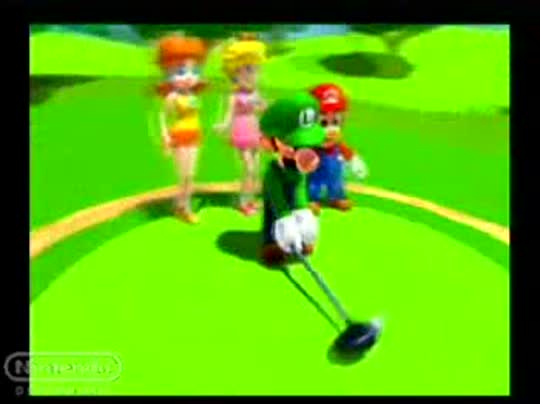 It's the favoured downtime recreation of professional footballers, company executives - and now, plumbers, princesses, dinosaurs and apes. In Mario Golf: Toadstool Tour, the Nintendo GameCube follow-up to the Nintendo 64's much-loved Mario Golf 64, the golfing green plays host to some of its most bizarre and brilliant moments ever.

All the usual suspects - Mario, Luigi, Peach, Donkey Kong, Wario and more - have pulled on their golfing strides (with some difficulty in Wario's case, and for Donkey Kong read 'golfing tie') to guide that dimpled white ball into the little hole. The Toadstool Tour championship, with its myriad hazard-laden courses, rewards only the most skilled clubber with anything other than grass-stamping frustration. With your help, your chosen character hoist the winning cup above their grinning head.

Step out onto the Mario Golf: Toadstool Tour's wide range of golfing greens and you'll view beauty to make your eyes salivate. The 'real-world' courses are all lush green grass, hillocks and water hazards, and lustrous forest perimeters - plus the odd Nintendo twist on famous monuments like Mt Rushmore, where the USA's respected forebears are replaced with the mischievous smirks of Yoshi and Luigi.

But Toadstool Tour also features brand new Mushroom Kingdom-themed greens - decorated with those familiar spotted mushrooms, bubbled trees, Piranha Plant and Chain Chomp hazards, and even warp pipes that transport the ball from one section of the green to another. In such rule-twisting environments, potential losers can become sudden first-placers at the drop of a hat. But your talent with Mario Golf: Toadstool Tour's new ball-whacking system will also play a big part in whether you'll be standing on the winner's podium. The power bar system returns - press the A Button to stop a roving power bar and determine shot strength - but now there are two modes of swing. Novice players can have everything but strength controlled automatically - experienced players can use fast combinations of the A and B Buttons to add topspin, backspin, slice and more. With practice, this superb new system allows expert players to send the ball rocketing skyward with astonishing power, or diving towards earth as though ricocheting off an invisible ceiling.

Add to this a golf bag-full of differently-abled clubs and putters, additional sidespin opportunities, and the option of executing a special effects-fuelled Power Shot, and in Mario Golf: Toadstool Tour you're playing with a satisfyingly deep control system that can rescue you from even the nastiest situations. Mario Golf newcomers needn't be stuck with bogey after bogey, though. A guide arrow shows you the path of the ball (albeit in a dream world where wind, hills, obstacles and ball bounce don't exist - we don't want to make it too easy for you), and handy grids are pasted onto the green to indicate those dangerous bumps, dips and curves. Plus, the camera's totally at your beck and call - so pull up to see the path to the hole from a cloud's perspective, or scoot into the distance to check the terrain. Very handy.

As you work your way through the increasingly tough greens - encountering tricky turns, gaping chasms, and many an infuriating water hazard - you'll be treated to a carnival of first-class animation. Mario and co. practically drip character as they drag the club back, connect with the ball to an explosion of pretty sparks (and 'NICE SHOT!' if your button presses are spot on), and celebrate or sulk with every birdie, bogey or hole-in-one. Princess Peach looks better than ever, fresh from her Super Mario Sunshine vacation and in her skimpiest miniskirt yet, and big DK's ham-fisted grasp of the relatively tiny club is as hilarious as ever.

Mario Golf: Toadstool Tour truly comes alive when two, three or four players unite for a swinging time - and not least because with a stab of the D-Pad, your character can yell an "encouraging" comment at just the right time to scupper an opponent's swing. Watch your rival rant - and count yourself lucky that real golf clubs aren't involved, or you can bet you'd have one wrapped around your neck. And as if all that wasn't enough - plug into your copy of Mario Golf Advance Tour for Game Boy Advance, using the Nintendo GameCube Game Boy Advance Cable, and you can transfer characters to and from the two versions.

Mario Golf: Toadstool Tour takes two great things - the Mario universe, and golf - and wraps them together in such a flawlessly enjoyable way that's it difficult to imagine they were ever separate. Plus, you don't need to don a pair of embarrassing checked trousers to play, either. Although, obviously, you can if you want...