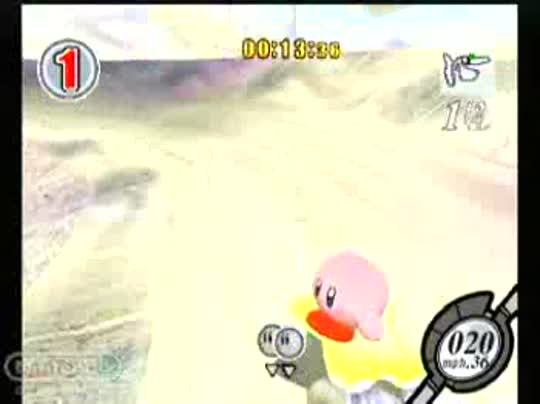 The result? Some of the most compulsive and unique Nintendo GameCube racing yet. Kirby's Warp Star engine - for that of course is the big five-pointed yellow star's name - acts as your steed for this frantically-paced trip around some rollercoaster Dream Land courses.

Each player controls a different-coloured Kirby (the player with Controller 1 in their hands always bags the classic pink hero) and slides and glides along shortcut-stuffed tracks, while using Kirby's trademark mouth-hoovering move to grab abilities that scupper opponents. The key to Kirby Air Ride's brilliance is the new and staggeringly simple, yet endlessly deep, control system.

Because - get this - there's no accelerate button. Kirby powers forward automatically, and everything except steering is handled by the A Button. Tap it to suck up abilities and use them. Push it to brake. Hold it down to charge up as you round a corner, then release for a post-turn boost. Simple, ingenious, easy to learn, satisfying to master - and perfectly suited for Nintendo GameCube's deliciously sizeable A Button.

As you master the controls - easy even for those who don't count hand-eye coordination among their best friends - you'll be 'screeching' around 90-degree corners, using ramps to leap into shortcuts, activating boost pads that send a speed-flattened Kirby screaming into the distance, and tipping the Control Stick back and forth to maximise the Warp Star's dreamy mid-air drifting and gliding capabilities.

The 15-or-so different Warp Stars are blessed with vastly different top speeds, gliding powers and turning skills - making one your personal specialty is half the fun. A trackful of suck-upable creatures, who've obviously picked a really bad location for their gentle stroll, make things even more interesting. There's an icon floating above each, and this shows you the opponent-scuppering ability you'll gain if you hoover it into your gob. Kirby morphs with most abilities, too - so he'll don a blazing crown when chucking fireballs; don impressive wings for increased gliding ability; and dress up as none other than Link to wave a super-destructive sword around.

In multiplayer, the endless jostling for position - partly a result of steering ability, mostly a consequence of 'friends' lining each other up in their sights before letting loose a flurry of laser shots or a bomb the size of Finland - will keep the laughs and the tears coming for hours. And with so many sneaky shortcuts scattered around the multitude of courses (one sees Kirby hop aboard a beanstalk big wheel and get lifted to a later section of track), back-markers needn't be back-markers for long.

In fact, the courses as a whole are faultless. Go for the power-ups while skimming across the simple green pastures of Fantasy Meadows; test yourself with slippy-slidey turns on the ice floes of Frozen Hillside; and gently tap your jaw back into place after witnessing the looping multicoloured tightropes of Checker Knights, which loop around in the sky before plunging you into a ghostly underwater city at breathtaking speed. Kirby's world has always been downright beautiful - enjoy the tour. With so many alternate routes to explore and racing lines to perfect, you'll be plugging away at the default Air Ride mode for ages.

But there's more. Top Ride is a quirky top-down 2D race for up to four Kirbys that's a real rival for the Air Ride mode in the button-stabbing, rival-bashing stakes. And City Trial sets you and your friends on a race for power-ups, before throwing you together for a great big barmy bonanza of a battle that will leave you physically exhausted. All immense fun with pals. It's not often a racing game cooks up a new concept - and even rarer that tinkering with the traditional two-button accelerate/brake system produces anything other than mouth-droopingly unpleasant results.

Kirby Air Ride confidently does something new, and the resulting racing is nothing but pure, undiluted fun. Go Kirby!