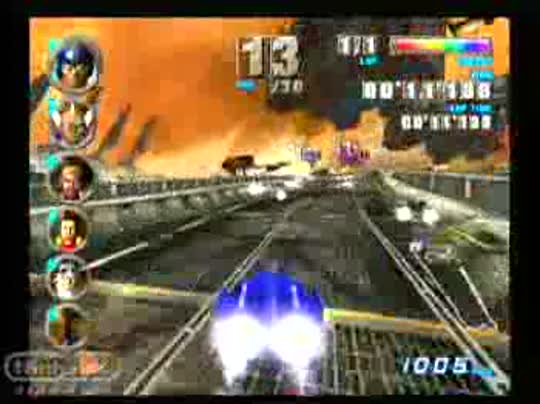 Power down the straight. Lean into the hairpin bend, twitching the steering at the perfect moment to edge past two rivals. Manoeuvre onto the boost pad, just avoiding the smouldering shell of an unluckier racer's craft. Power up and scream up, around, and back down the 360° loop. Check the speedometer. 2000 km/h. It can only be F-Zero.

F-Zero GX brings Nintendo's much-loved F-Zero series - born on Super Nintendo, matured on Nintendo 64 and Game Boy Advance - roaring into the next generation. Devotees of earlier versions will be right at home with F-Zero GX's familiar controls and strategies; magnet-o-racing newcomers will be tearing around the rollercoaster tracks like experts in no time; and everyone will be on their knees in awe at the speed and splendour of this Nintendo GameCube racing wonder.

There are a wealth of modes packed into F-Zero GX. Multi-race Grand Prix, Time Attacks, four-player Vs Play, and - a superb addition - a one-player Story Mode that puts you in the shiny gold boots of F-Zero hero Captain Falcon for a series of racing 'missions'. But however you choose to play, F-Zero GX is always about the speed of its floaty futuristic craft - speed so belief-beggaring that you'll be picking flies off your face after each race. The A Button makes you go faster. Faster, and faster, and faster, until a quarter-kilometre of track is disappearing under your craft every second. Of course, there's some steering to be done, too - the L and R Buttons, which give you additional left and right lean respectively, will be your best friends here. At 1000 km/h, only the lightest of presses is enough to flick you around F-Zero GX's right-angled nightmares and hairpin horrors, or sidestep a rival, or tilt your terrifying post-ramp descent back onto the track.

And then there are the energy strips - mauve sections of track that charge up an energy meter in the corner of the screen. This innocent-looking bar represents your boost. Press the Y Button, and with a head-spinning visual and aural 'whooosh', you're off over the horizon at nigh-on 2000kph, overtaking rival racers before you've even noticed they're there and taking three corners in the time it takes to blink. Take care, though: your boost meter is also your energy meter - when it reaches zero, it's race over.

F-Zero GX's impressive roster of 30 craft all come with a unique look, ability, and irresistibly-designed comic book-style pilot. It doesn't take long to settle on a favourite - the speedy, fragile sleekness of the White Cat, perhaps, as piloted by the svelte Jody Sumner, or the bullishly heavy Stingray with the never-happy Samurai Goroh at the helm. You can tinker with the speed/acceleration ratio of all the craft, too - ladling on oodles of subtle strategy. With an amazing 29 other vehicles sharing the road with you, the feeling of actually racing, bashing and jostling your way through the pack, your spine tingling its awareness of the victory-hungry vehicles behind you, has never been so potent. Luckily, you've got the power to nudge or spin other racers off the track into the ether, sparks flying with the clash of that garishly-painted metalwork. It's all the more satisfying knowing that as your friend takes their multi-mile tumble down to the earth far, far below, they're out of the race for good.

But the real beauty of F-Zero GX is its 20 tracks. F-Zero stalwart Mute City returns, pastel neon advertisements for sushi bars and 'Electric Stores' hovering and flickering like ghosts over its meandering twists and turns. On the Lightning track, the sense of danger created by the perilous suspended roadways is added to by the angry sky, endlessly fractured by purple lightning. White fire illuminates the industrial metalwork of Port Town, and Green Plant sees amazing transparent track loops sitting in the midst of dense forest, where the blinding sun is often only just visible through the lustrous leafage. As you progress, the roadways become narrower, the loops and twists more stomach-churning, the jumps higher and trickier to land from. Of course, it's all tricky at 2000 km/h - just try not to punch the air and scream, "Victory!" when you finish a lap without pinballing off a single track wall.

Added to all this is a ground-breaking link to the arcade version of F-Zero - F-Zero AC. In F-Zero GX, you can customize your craft with bits and pieces earned from race victories - but to gain access to all 8000 possible vehicle combinations, you'll need to download parts from F-Zero AC, too. Even better, you can upload your custom-built craft into F-Zero AC and race it in the arcades - and download new pilots and ship parts to F-Zero GX. Truly a new dimension in gaming.

Maybe one day, this adrenaline-squirting vision of future racing will actually become reality. In the meantime, the unreal speed of F-Zero GX seems quite real enough for us, thank you very much.