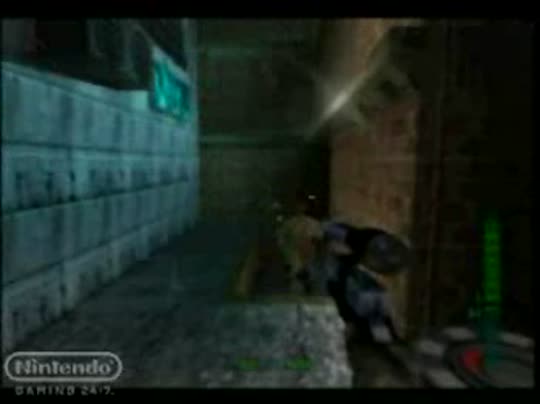 Flawless first person shooting to die for. Rare flips the script on the predictable plots of first-person shooters, with a twisting storyline where aliens are allies and trust is a luxury which you can't afford. Players control special operative Joanna Dark, who earned the nickname Perfect after graduating with top honours from the Carrington Institute.

The action begins in the year 2023, when Joanna receives a distress signal from a troubled scientist held hostage in the heart of a monolithic corporation called dataDyne. Joanna's first mission is to infiltrate the heavily guarded corporate headquarters, and soon she finds herself at the epicentre of an intergalactic conspiracy set to explode. We don't want to spoil the surprises that pop up along the way, but it's safe to say that throughout her adventure Joanna discovers the corrosive effect power and greed have on the human psyche. As an extra bonus, she's also a crucial player in a massive war between two alien species.

Each stage of Perfect Dark can be played on one of three difficulty levels: Agent, Secret Agent or Perfect Agent. In addition to pumping up enemy AI, the higher difficulty levels give players increasingly complex tasks to complete. Like GoldenEye, players will be able to earn cheat codes by completing the missions within a specific amount of time. Only the most skilled gamers will be able to earn all the available cheats. Perfect Dark goes above and beyond the call of duty when it comes to multiplayer gaming, offering an unbelievable amount of variety and complete control of every conceivable option. When four friends get together for a night of perfect fun, dawn can easily creep up before you know it. Perfect Dark offers a traditional two-to-four-player Deathmatch Mode, which allows players to select weapon types, fighting arenas, time limits, frag limits, character appearance and many other changeable details. As players progress in the single-player game, new weapons and arenas are unlocked in the multiplayer mode.

Rare lives up to its reputation for slick presentation with astonishing visuals and special effects like dynamic lighting, explosions, dust, steam, and sun glare that will knock you off the couch. Rare has obviously taken advantage of its in-house motion-capture studio, too, creating enemies with eerily realistic animations. In Joanna's line of work, the slightest slip can result in the loss of innocent lives. Not surprisingly, Rare has fine-tuned the play control to remove the slightest possibility of such foul-ups. The basic feel of the game is very similar to GoldenEye 007.

Players have the option to choose a preferred Controller configuration. Perfect Dark features a new weapon selection system that's similar to Turok 2. If you hold the A Button, you're given an on-screen list of every weapon available. All you have to do is move the Control Stick to the desired weapon, then release the A Button. If you prefer, though, it is still possible to scroll through the weapons by tapping the A Button. As in GoldenEye, the B Button is used to reload your weapon, activate switches and open doors. If the B Button is held down, it will activate the secondary function of your current weapon. The play control of Perfect Dark will feel completely natural to GoldenEye veterans, leaving you free to concentrate on the game and not the Controller.

Due to the sprawling size and scope of the game, Perfect Dark will require the use of the N64 Expansion Pak for the solo missions and 3-4 player multiplayer modes. Only 1-2 player deathmatch-style play and the Challenge Mode will be available without the Expansion Pak.