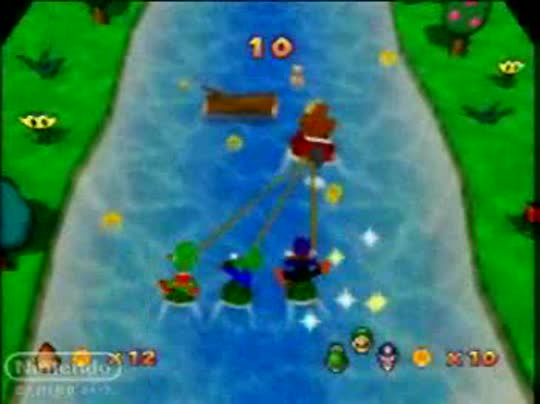 Nobody can party like Mario. The portly plumber has already hosted two wild celebrations on Nintendo 64, and with Mario Party 3 the stakes are higher than ever. Featuring 70 all-new mini-games to master and wild new interactive game boards, this is one party you'll want to RSVP for, ASAP!

This time around, the Mushroom Kingdom crew is partying down to figure out who deserves to keep the Millennium Star which has just fallen into Princess Peach's courtyard. Mario, Luigi, Peach, Yoshi, Wario and DK decide to solve their dispute in the only logical manner: by playing board games filled with challenging four-player mini-games! The best way to enjoy Mario Party 3 is to get on the phone and call a few friends to join in on the fun. After each player chooses a character, the frenzied hunt for Stars begins. Mario Party 3 plays a lot like a traditional board game, in that players roll a dice to move around a game board. The beautifully rendered game boards are filled with hazards, like a giant rolling snowball in Chilly Waters and runaway mine carts in the Creepy Cavern. Players earn Coins by competing in a wide variety of mini-games, sometimes teaming up with friends and other times working alone.

Mario Party 3 is packed to the gills with new games you've never seen before, like Eatsa Pizza, where you try to be the first player to scarf down a pizza the size of a swimming pool. Another cool game called Dorrie Dip lets you ride on the back of the giant lake monster from Super Mario 64. Once you have a decent stash of Coins in your pocket, then you can purchase a Star when you land on the elusive Star space. The player with the most Stars at the end of the game is the winner - but it's not quite as simple as it sounds. Stars are constantly stolen and swapped from one player to the next, either by Boo's thievery, Toad's game of chance or Bowser's nasty tricks. To come out on top in Mario Party 3, you have to mix in a little luck with your gaming skills.

In addition to its tried and true formula for four-player fun, Mario Party 3 introduces a totally new way to play called Duel Mode. Duel Mode allows two players to compete against each other by hiring assistants like Toad, Thwomp or Boo to help them attack their opponents to win the game. Other helpers for hire include a Koopa Troopa, Goomba, Snifit, Bob-omb and Piranha Plant.

Whether you're a seasoned Mario Party veteran or this is your first invitation to a Mushroom Kingdom bash, you'll have a blast racing against your friends to grab every last Star you can get your hands on. Even if your friends are grounded, you can throw yourself a single-player party with Mario Party 3's Story Mode. Either way, Mario Party 3 is an action-packed funfest with slick graphics, great variety and unbeatable replay value.