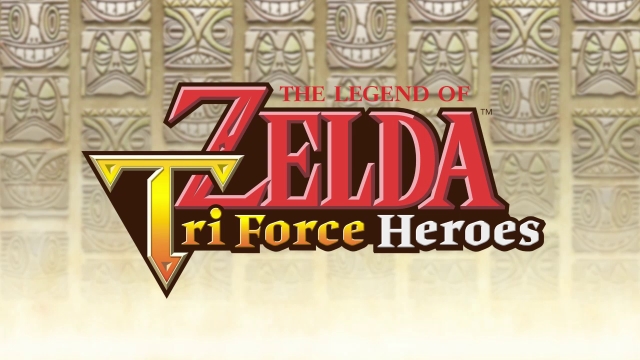 Combine the powers of three Links in The Legend of Zelda: Tri Force Heroes for Nintendo 3DS family systems! Work together as a dynamic trio, don different outfits to gain new abilities, and save the fashion-obsessed kingdom of Hytopia from a ghastly curse.

Answer the king’s call for heroes to rid the princess of a hideous new outfit and restore style to Hytopia. Embark on a quest outfitted for three, with each player controlling one Link each. Travel to eight different areas of the Drablands, from icy caverns to red hot volcanoes, and explore over 30 levels brimming with puzzles, traps and baddies.

Buddy up with two other heroes online* or via Local Play. With Download Play**, three friends can play together using just one copy of the game, and they can even carry some of their progress over to the full game. You can also take on levels yourself by enlisting the help of statue-like companions called Doppels to give you the might of a trio!

All three heroes are bound to the same Heart Meter, so help each other out and use the icons on the Touch Screen to communicate with your comrades: request their help, give them hints and cheer them on. Two or three Links can stand on each other’s shoulders and form a totem to solve perplexing puzzles, throw players to higher ground and tower over the most fearsome opponents.

Use the rewards from your adventures to craft over 30 stylish new outfits. These outfits not only change your hero’s look, but also bestow them with unique abilities: grab the Goron Garb to swim through lava, don the Kokiri Clothes to power up your arrows or throw on the Legendary Dress to increase heart drops.

For even rarer loot, work together with other players to revisit levels and take on new challenges, or fight against them in the Coliseum in free-for-all battles. Bring your choice of outfit into one of eight arenas and fight it out using whatever items you can get your hands on to win rare rewards.

Triumph in a trio and bring fashion back to Hytopia in The Legend of Zelda: Tri Force Heroes for Nintendo 3DS family systems.

Learn all about this exciting new adventure from The Legend of Zelda series producer Eiji Aonuma!

Where does The Legend of Zelda: Tri Force Heroes fall in the series' timeline?

The game takes place several years after A Link Between Worlds and features the same hero. Certain events bring him to the kingdom of Hytopia, where he dresses as he does in order to hide his heroic origins. There’s no telling where the other hero candidates come from, but the player character you control is the true Hyrulian hero from A Link Between Worlds. If you aren’t familiar with what he was up to in A Link Between Worlds, I’d definitely recommend giving it a play.

What happened to the purple Link from The Legend of Zelda: Four Swords Adventures?

The purple Link from Four Swords Adventures was one of the Link clones created by the power of the Four Sword itself. The three main characters of this game, meanwhile, are “hero candidates” different from Link himself. The idea of controlling a trio worked out well in terms of game design, too, so purple Link is taking a break from this game.

Why can The Legend of Zelda: Tri Force Heroes be played with only three players and not four?

There are several reasons. First, our thought with this game was to let you stack characters into a totem to reach higher places. Having four people would make rearranging this totem difficult, and the two people in the middle wouldn’t have much to do a lot of the time. In terms of the camera, too, we’d have to zoom out from the environment the higher the stack gets, which would naturally make the player characters smaller.

Having a trio creates certain advantages as well. If you’re divided into groups of two and one, the sole player gets worried about being separated from the group, and the other two get worried about how they’ve lost their partner. As a result, they’ll start to naturally stick together and try to work as a trio. Also, when a group of people are deciding upon something, they generally rely on majority vote a lot of the time. With four people, this creates the chance of a 2-2 tie, making it hard to make snap judgments on what to do next. Having a trio work together is suited pretty well for puzzle-solving.

Most games in The Legend of Zelda series have a connection to Hyrule. Does the land of Hytopia connect to Hyrule in any way?

Hyrule and Hytopia are connected. The game’s set several years after A Link Between Worlds as well, and the hero visiting Hytopia is also the hero who saved Lorule.

What was your inspiration for The Legend of Zelda: Tri Force Heroes?

We got inspiration from the system in The Legend of Zelda: Spirit Tracks where you alternated between controlling your player character and the Phantoms. We thought it’d be neat if you could take that Phantom/player control mechanic and play as a team with your friend or significant other or whatnot.

Expand your adventure with a free update!

From December 3rd 2015, players will be able to download a new software update for The Legend of Zelda: Tri Force Heroes which opens up some brand new features.

For other update features and changes, please visit our Support Page.

Please note: this update is required in order to use The Legend of Zelda: Tri Force Heroes' online features.

Please note: certain gameplay conditions must be met in order to access the content unlocked by the free software update.