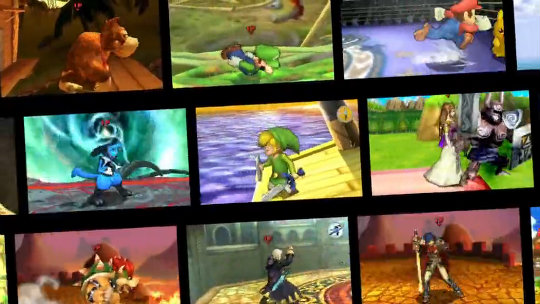 Famous names from favourite Nintendo franchises and guest characters come together in a portable fighter filled with spectacular action on Nintendo 3DS family systems. With unique modes, online multiplayer, the ability to customise your fighter and the series’ biggest roster of playable fighters ever, Super Smash Bros. for Nintendo 3DS is truly a clash for the ages!

The basics of Super Smash Bros. are simple. Use your chosen character’s unique attacks and special moves to damage your opponent, then hit ‘em with a smash attack to send them flying off the stage! The higher your opponent’s damage – represented as a percentage – the farther they’ll fly when launched, so pummel away until you see them steaming, then unleash your strongest smash attack and watch your target skyrocket off the stage! Take on nearby challengers in local multiplayer, or bring the battle to faraway friends and foes in online matches.*

Super Smash Bros. for Wii U and Super Smash Bros. for Nintendo 3DS both share the same roster of fighters, items and basic gameplay, but each boasts unique modes designed around its host format. On Nintendo 3DS, go toe-to-toe in StreetSmash, where you can battle against character tokens gathered via StreetPass. In Smash Run, battle enemies in a large labyrinth, then power your character up for the final battle in a unique mode packed with action, strategy, and completely compelling gameplay! And of course, it’s the first ever Super Smash Bros. game you can play on the go – perfect for throwing down against any opponent you meet, no matter where or when!

You can power up your Super Smash Bros. for Nintendo 3DS experience with amiibo (sold separately). In Super Smash Bros. for Nintendo 3DS you can transfer the data from your amiibo so it can appear in the game and fight for you. As your amiibo fights, it will develop its own unique attributes and skills, becoming stronger and learning new moves. You can even add your own twist to combat by customising special moves!

Essentially, amiibo (sold separately) are character figures that allow you to connect directly to your amiibo-compatible games. Super Smash Bros. for Nintendo 3DS can read your amiibo and transform them into what we call "figure players" that will join the battle with – or against – you!

Adding figure players to the game is easy. When selecting fighters to play in a Smash battle mode, simply touch the NFC touchpoint with your amiibo and a figure player will appear in an empty fighter slot.