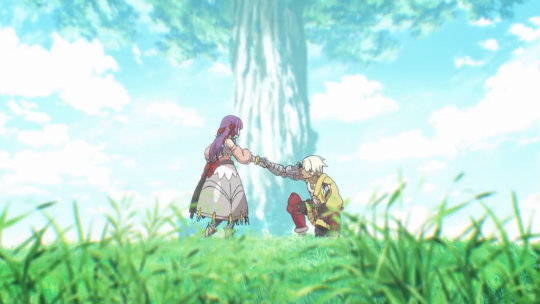 Delve into the Yggdrasil Labyrinth, explore its many twists and turns, and fight a variety of strange monsters in turn-based combat. As you trample through the dungeon, confront large and powerful beasts visible outside of battle, then muster the courage to take on these potent adversaries – or evade them completely. Be careful – they move with each step you take, so watch their movements closely.

As you go, be sure to map out areas on the Touch Screen to identify key landmarks, treasures and gathering spots, including some that you can even return to multiple times. As a budding cartographer, identify poisonous floor titles and other fiendish traps to ensure you’ll never be taken by surprise again! If you’d rather focus on dungeon exploration and combat, use auto-mapping to draw the maze without your input.

There are two ways to approach adventure: Story Mode and Classic Mode.

In Story Mode, play as a young knight whose destiny is intertwined with the fate of the world. As the Fafnir Knight, your mission is to protect the princess of the Duchy of Caledonia, Arianna, as she completes a special ceremony carried out every 100 years to keep the monsters locked away. On your travels you’ll encounter a cast of colourful characters, each with their own unique skills. New to Etrian Odyssey 2 Untold: The Fafnir Knight is the Fafnir class, which allows you to transform into a beastly demonic form with enhanced attributes and abilities.

In Classic Mode, create a unique party of explorers, and venture out into an enormous maze. Customise your team from a selection of appearances and a roster of 13 distinct classes. Choose from the magical Alchemists, the quick and versatile Survivalists, the healing Medic class and more.

Whether you’re a newcomer or an old hand on the battlefield, there’s a difficulty setting to suit you in both Story Mode and Classic Mode. If you’re looking solely to enjoy the experience rather than take on a challenge, foray through dungeons in Picnic difficulty mode, while dungeon-crawling veterans that desire an intensely challenging playthrough can choose Expert difficulty.

Equip grimoire stones to grant your adventurers special bonuses and give your team the edge in battle. Equipping a grimoire that has a skill specific to a certain type of equipment can even allow a character to use an item that doesn’t belong to their class. Head to the Guild House to exchange grimoires, or even recycle grimoires you no longer need. With StreetPass or QR Code patterns, you can receive Guild Cards from other players – if the character attached to the Guild Card has grimoires equipped, then you can trade with them!

Don’t forget to seek out Monster and Forest Materials to create legendary Forest Cuisine! Create more than 70 different meal types and use them to give your party a variety of boosts, or advertise them to the citizens of High Lagaard and sell your recipes on for profit. By investing and developing different wards of the city, you can grow your clientele and unlock new classes of customers that will help you generate even bigger profits.

Keep the evil forces at bay and fulfil an ancient destiny in Etrian Odyssey 2 Untold: The Fafnir Knight, only on Nintendo 3DS family systems.